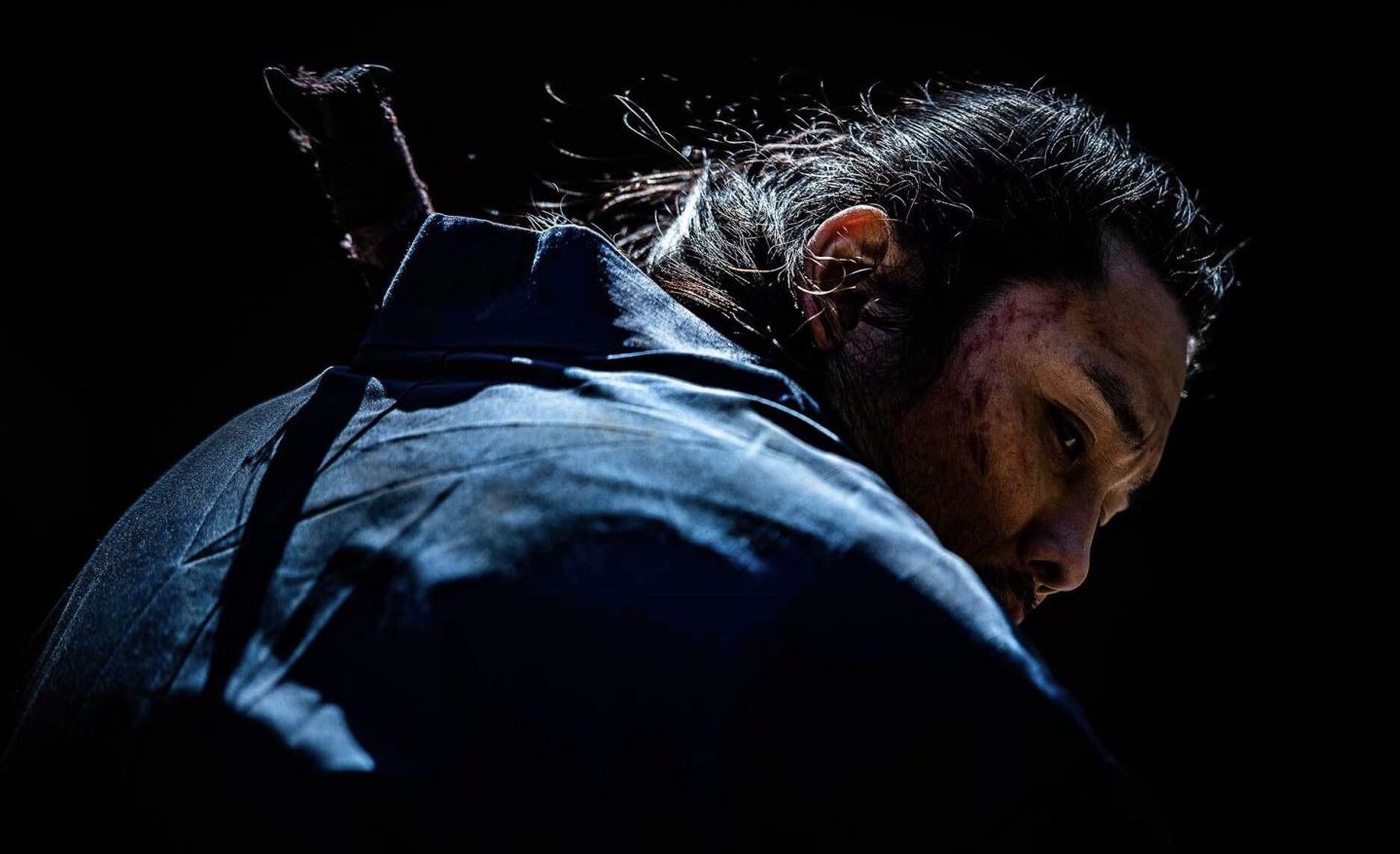 Action star Tak Sakaguchi rose to fame in Ryuhei Kitamura’s low budget zombie movie Versus, thereafter starring in a series of similarly pitched splatter and exploitation films as well as appearing in long running tokusatsu series Kamen Rider and making his own directorial debut with manga adaptation Be a Man! Samurai School in 2008. Much to fans’ disappointment, Sakaguchi announced his retirement as a performer in 2013, but has since made several high profile returns to the big screen including Yuji Shimomura’s Re:Born in which he played a former JSDF elite soldier living quietly in the countryside until an old enemy tracked him down.

Again emerging from semi-retirement, Crazy Samurai Musashi (狂武蔵, Kurui Musashi) sees Sakaguchi reunite with Shimomura to play the most famous of legendary samurai Miyamoto Musashi in an all out action fest including a 77-minute one cut assault during which he singlehandedly kills 588 men. Unsurprisingly light on dialogue, the film credits Sion Sono with original concept and Atsuki Tomori with screenplay who do at least add a little context which frames this, to an extent, as a tale of merciless samurai hypocrisy and the fallacy of “honour” as a code for living.

As the film opens, a small boy stares in wonder at a white butterfly before being reminded that he has, as the head of this clan, apparently challenged the great Miyamoto Musashi to a duel in revenge for his murder of two of their previous leaders. Affable retainer Chusuke (Kenta Yamazaki) tells the boy not to worry, he’s not going to let anything happen to him, but stops short of explaining that he’s really just a kind of bait. Nevertheless, Chusuke has his reservations about their plan. After all, it’s not very befitting of a samurai’s honour to challenge someone to a private duel but invite 400 retainers to the surprise party. 400 against one seems faintly ridiculous. It might even be embarrassing if anyone else finds out, but then as the priest (Yosuke Saito) says you can just kill them too. In any case, while Chusuke is talking to the priest and the mercenaries are busy arguing with the retainers, Miyamoto Musashi sneaks through the perimeter and fells the small boy who is technically the “leader” of the clan with one flying sword blow, kickstarting a scene of utter carnage as he attempts to fight his way out of the compound.

“How many more?” Musashi asks in exasperation during a momentary pause, later doing a few calculations. He thought there’d be about 70, but it feels like he’s killed a few more than that. True to form, the samurai warriors largely follow the protocols of honour. They fight one-on-on, and only at the end does anyone attempt to attack Musashi from behind. He makes swift work of them, taking each man out with maximum economy, occasionally challenged by complete randomers who apparently aren’t even part of the clan, they just really don’t like him. Though necessarily repetitive, Shimomura’s innovative, non-stop fight choreography follows a realtime, broadly naturalistic logic in which duels are generally brutish and short. Musashi begins to tire as he continues to fight for his life, taking brief breaks for water, food, and existential questioning, before heading back into the fray.

“Duty? Honour? Who gives a crap? I just wanna win” he later says in what is simultaneously a rejection and an embodiment of the samurai code. “I’ll die one day anyway” Musashi chuckles to himself before rejoining the fight, wilfully embracing the nihilism of the samurai existence that allowed him to kill a child without thinking twice. Chusuke failed to protect his honour, or save his clan, his earnestness perhaps betrayed by his mentor’s underhandedness in unwisely hiring vast numbers of mercenaries and sending his own unprepared students, many of whom simply flee (a wise decision), to face off against an unstoppable killing machine. Paradoxically, Miyamoto Musashi will survive because he doesn’t care about playing fair, he may not even care about surviving, all he wants is to win. “A kid who knows nothing of war”, Chusuke’s stubborn insistence on illusionary samurai honour will lead only to more suffering and violence while all Musashi can do is sigh in resignation and ready his sword.