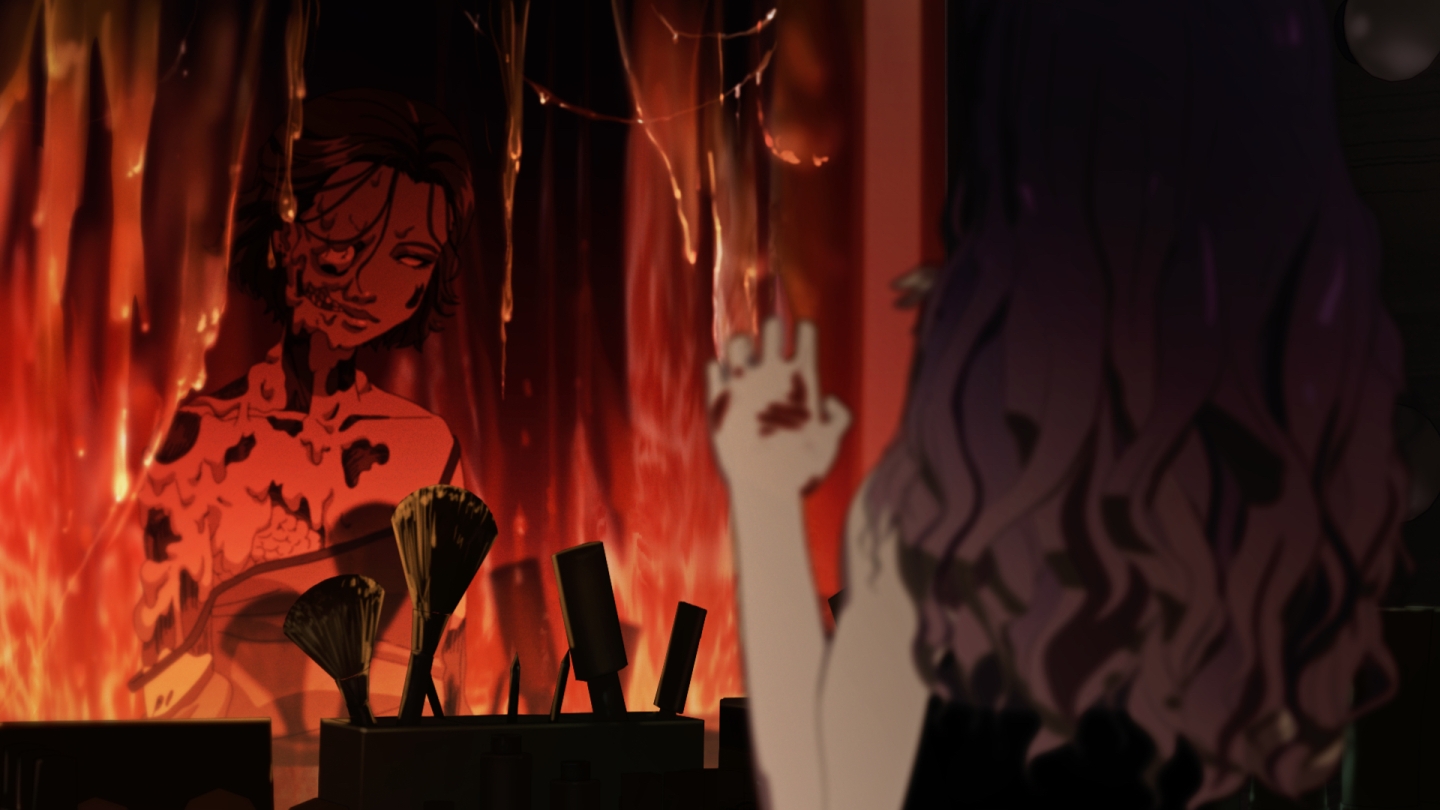 Written by Hayley ScanlonPosted on December 20, 2020

“Nothing matters more than being beautiful” according to an ironic statement made by a crazed revenger apparently both consumed by and resentful of South Korea’s obsession with conventional “beauty” standards. Beauty may well be in the eye of the beholder, but in this case the beholder has a noticeably conformist eye which is why it’s become something of a running joke that every manufactured pop star, model, or actress, has the same face. Not to be considered “beautiful” is to be relegated to a kind of underclass in which one’s thoughts and achievements are not accounted credible to the extent that employment prospects and class status are often dependent on meeting closely controlled constructs of physical beauty. Though it is true that men are also increasingly subject to these same definitions of attractiveness, they are not usually faced with the same kind of “invisible wall”, as the heroine of Cho Kyung-hun’s animation Beauty Water (기기괴괴 성형수, Gigigoegoe Seonghyeongsu) later puts it, which so limits a woman’s prospects in the fiercely patriarchal society.

Yaeji (Moon Nam-sook) is a case in point. Ironically working as a makeup artist, she is regularly insulted by those around her including diva of the moment Miri (Kim Bo-young) who has her banished from the room, not wanting to see such an “ugly pig” so early in the morning. Only new recruit actor Ji-hoon (Jang Min-hyeok) treats her with any kind of kindness, remarking on the peculiar beauty of her eyes and later suggesting they do his makeup in a quiet corridor so she won’t be subject to Miri’s green room tantrums. Unexpectedly asked to fill-in for an absent extra sitting at a table laden with food, she later finds herself going viral, branded a “greedy fatty” online while journalists start bothering her at home trying to get her side of the story. She locks herself away in her room and refuses to come out. It’s then that she receives a mysterious text message followed by a parcel containing “Beauty Water”, an experimental substance which claims it can make even the least attractive of people “beautiful”.

“I just want to be loved” Yaeji plaintively claims, fully believing love is something you cannot have when you are not beautiful. Tragically she later realises that she was loved after all in recalling her parents’ reassurances during a traumatic childhood episode in which she came second in a ballet competition convinced that she danced better than the other girl but lost out because of her “ugliness”, but rather than learning to love herself in rejection of socially defined notions of conventional attractiveness Yaeji goes down the dark path of the quick fix entrusting her future to Beauty Water. She rebrands herself as Sul-hye and embarks on the cynical life of a vacuous influencer, dating various wealthy men but dismissing them all in her caustic interior monologue now confident enough to feel she can do better but leveraging only her looks in order to catch a useful man rather than trying to forge a life of independence. She is now fully a prisoner of the oppressive and tightly regimented gender-based social codes of a fiercely patriarchal society.

Nevertheless, in the grand tradition of experimental serums, Beauty Water changes her soul as well as her face. Obsessed with the pursuit of perfection in beauty, Sul-hye becomes increasingly violent and aggressive, bullying her parents into lending her money for extra treatment by holding them responsible for giving birth to an unattractive child. We hear TV reports of young women in their 20s going missing and half-wonder if Sul-hye herself or someone like her, another victim of Beauty Water, may be responsible, but equally we see that the entire entertainment industry which Sul-hye is now trying to enter as another means of attaining success and fulfilment is entirely built on the exploitation of female “beauty” which is itself used as a means of control. Ji-hoon, apparently kind and sensitive, retires from showbiz because he can’t live with its manipulative cruelty and warns Sul-hye about Miri’s manager whom he believes bought Miri her career through pimping her out to “powerful” men and then embezzled all her money. Miri has since gone mysteriously missing.

Finally we’re shown that appearances can be deceptive, that the “beautiful” are not always nice, nor exceptional in any other way than their physical appearance, and are unfairly prized by a superficial society. Judged for her purchases at the convenience store Yaeji stumbles on the way home while her building’s security guard offers no help, only the rude instruction that she should lose some weight then she’d be able to walk better. Meeting Sul-hye, the same guard reacts quite differently. Suddenly nothing is too much trouble, which might just be a problem of the opposite order in its vaguely threatening creepiness but just goes to show the extent to which a woman like Yaeji is held in contempt while those like Sul-hye are placed on a pedestal.

Internalising a sense of shame and inadequacy in “failing” to meet these “arbitrary” standards, Yaeji is content to destroy in order to remake herself. “Say goodbye to the face you know”, Beauty Water’s instructional video teases before descending into surreal gore as a woman literally slices away her ugly facade to expose the beauty hidden beneath. Reminiscent of Perfect Blue, Beauty Water’s B-movie sensibilities send Yaeji/Sul-hye into increasingly paranoid and uncertain territory, desperate to remain “beautiful” so that she might be loved but never learning to love herself while quietly murdering her essential self to attain a soulless image of idealised beauty. A late swerve into an unintended transphobia nevertheless undermines the central messages of the dangers inherent in society’s obsession with aesthetic perfection as the heroine struggles to escape her internalised shame only in an extreme act of self-destructive masking.