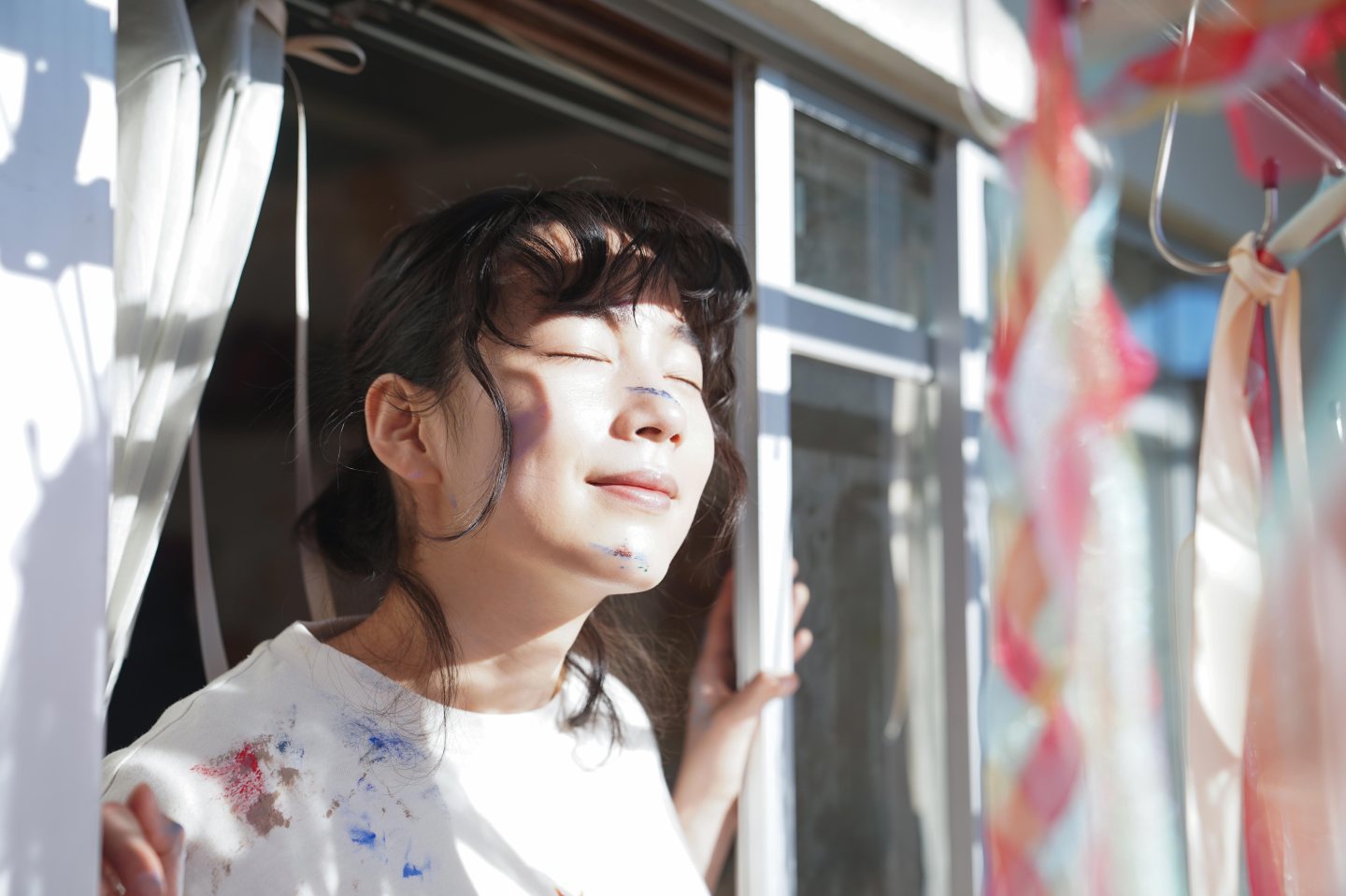 What is the place of art amid a global crisis? A young student finds herself wrestling with her sense of purpose uncertain if art is more necessary than ever before or a completely worthless waste of time that could be better used dealing with the situation on a more practical level. Written, directed, and edited by actress/singer Non, Ribbon is a response to pandemic anxiety but also a meta drama about an artist reclaiming a sense of confidence in their work along with their right to make it even if not widely understood.

As the film opens, art student Itsuka (Non) is lugging a series of paintings and art equipment back to her university for the upcoming graduation exhibition, only the exhibition has just been cancelled because the university will be closing its doors the following day due to the COVID-19 pandemic. Itsuka has to cart all her stuff home again, but she’s luckier than some she witnesses who are left with no choice other than to destroy the precious works of art into which they’ve poured four years of their lives because they can’t store them and neither can the university.

Watching her fellow students in tears as they crush, tear, and bludgeon their projects Itsuka can’t help but wonder what separates her painting from “trash”, seeing these precious pieces dismembered and left out for the binmen. The feeling is compounded when her mother (Misayo Haruki) pays her a visit, clad in a homemade hazmat suit, and throws the painting out justifying herself that as it had stuff stuck on it she thought it was just something she’d made messing around, more like a child’s collage than a serious piece of “art”. Unable to accept her mistake, Itsuka’s mother defensively doubles down leading to a climactic argument and the visits of other family members including her father (Daikichi Sugawara) who arrives with a social distancing pole and her sister (Karin Ono) who now dresses like an assassin each armed with passive aggressive peace offerings but ultimately seeking validations that her mother was right to dismiss her incomprehensible art.

While her friend Hirai (Rio Yamashita) is later caught sneaking into uni to work on her much more conventional piece, a large canvas painting featuring a young girl in a forest with giraffes and leopards, Itsuka has been unable to find the desire to paint. The painting, a mixed media portrait of a young woman surrounded by ribbons, sits looking down on her taped to the wall but she can’t get away from the idea that perhaps her work really is “trash” and she’s just been wasting her time on something meaningless that other people don’t understand or care about. The feeling is compounded when she’s informed that the job offer she had from a design firm for after graduation has been rescinded due to COVID uncertainty. Only when she accidentally reconnects with a middle-school classmate (Daichi Watanabe) who had praised her work does she begin to rediscover its value not least in allowing her to vent her frustrations not only with the pandemic-era society and its isolating anxieties, but the conservative ideas embodied by her mother’s constant complaints about her “attitude” reminding her she’ll never get married if she carries on as she is.

“This is what our frustration looks like” she explains incorporating her friend’s fractured painting to turn her formerly chaotic apartment into an installation covered in the ribbons which had previously swarmed around her. Opening with scenes of the deserted university peopled with broken statues, headless mannequins, and crude drawings on walls, Non captures a sense of the lonely despair of the early days of the pandemic allowing these now empty places to seem almost haunted by an eerie sense of absence. There is an unavoidable absurdity in the constant masking, obsession with social distance, and spraying anything and everything with sanitiser but also a care beneath the anxiety in the concern for others’ safety as well as one’s own. “Heavy” is how Itsuka frequently describes her situation not only the physical weight of her work but its spiritual burden along with her despair and anxiety for her uncertain future, but learning to bear it allows her to rediscover a purpose and value in art not despite but because of the times in which she lives. Quirky and heartwarming, Non’s accomplished directorial debut is not only a snapshot of ordinary life in a pandemic, but a meta tale of a young woman reclaiming her right to create and vent her frustrations towards a sometimes restrictive society.