Golden age Japanese cinema is generally resistant to the idea of romance as salvation. There may be a romantic happy ending, lovers uniting despite the mounting odds, but their happiness is often overshadowed by the anxieties of the world in which they live. Adapted from the novel by Tetsuo Miura, Kei Kumai’s post-war romance The Long Darkness (忍ぶ川, Shinobugawa) meanwhile insists that it’s love that will save you in the end as its dejected, insecure heroes find the courage to go on living precisely because of the strength and validation they discover in loving and being loved.

The hero, Tetsuro (Go Kato), feels himself to be cursed, overcome with a sense of shame and anxiety because of the dark shadow that hangs over his once prosperous family. His oldest sister committed suicide for love on his sixth birthday, while another sister then took her own life some time later out of guilt for having contributed to her death. His oldest brother whom he describes as sensitive and eccentric disappeared in grief, while the next oldest took a job at a Tokyo lumber yard and supported him as a student but later disgraced the family by running off with money he’d fraudulently accumulated in the name of opening his own company. Tetsuro is convinced that there is something genetically wrong with the family line and is intensely anxious that it will one day consume him too.

That might be why he’s unexpectedly bashful for a man of 27 in courting the pretty waitress of a local bar, Shino (Komaki Kurihara), whom he first met while celebrating the graduation of some other students after making a belated return to university. Shino too is carrying her own burdens which lead her to feel unworthy of happiness in that she was raised in the red light district and her family, evacuated to rural Tochigi during the war, is now impoverished and living in a shrine. The proprietress at her restaurant has pressured her into an engagement with a prosperous car salesman whom she doesn’t like but feels unable to refuse on the grounds that he will take care of her sick father. The car salesman tries to rape her so she’ll have to marry him which, as her father points out, does not speak well for his character or the prospect of a happy marriage. Her father is clear, he wants his daughter to be happy and in this age a woman’s happiness does largely depend on the man she marries. He tells her to find a man she loves more than life itself and marry him without a moment’s thought.

The forces which divide them aren’t so much to do with class, politics, money, or custom but with internalised shame and the deeply held belief that they are “bad” people who do not deserve to be happy. “Can I go on living?” Tetsuro’s only remaining sister tearfully asks him, burdened both by her traumatic family history and by a visual impairment that further convinces her she cannot expect to be a part of regular society and has no prospect of a happy future. He almost turns away after noticing her crying but realises that’s what his absent siblings might have done and resolves to behave differently, reforging his his familial bonds with love and compassion in place of the gloominess and futility that had long overshadowed his family home. Just as Shino’s father had anointed Tetsuro a “good person” he could entrust his daughter to, Tetsuro’s sister and mother affirm that Shino too is “good” and her presence brings light and laughter back into their lives after years of lonely suffering.

“We’ve spent our whole lives worrying about appearances” Tetsuro declares, “it’s time we stop”. Affirming that her new in-laws are also “all good people”, Shino too admits that she realises the “uselessness” of her old life “never saying what I want or don’t want, going along with everything”, liberated by the transcendent power of love that allows her to overcome her fear and insecurity to claim her own agency, the jingling bells of a farmer’s horse cart echoing from below as if in celebration. Shooting in a classic 4:3 monochrome with occasional intertitles and voiceover, Kumai emphasises the literary quality of the tale spanning the rundown lumberyards of post-war Tokyo to the frozen north of Tetsuro’s frosty home but finally argues for the freedom and possibility to be found in the contemporary era by making an active choice for happiness rather than submitting oneself to a fated misery out of misguided obedience to austere and oppressive social codes. “Everyone’s jealous of you” an old woman cackles catching sight of the newly-wed couple on the train to their new life, and you can well understand why. 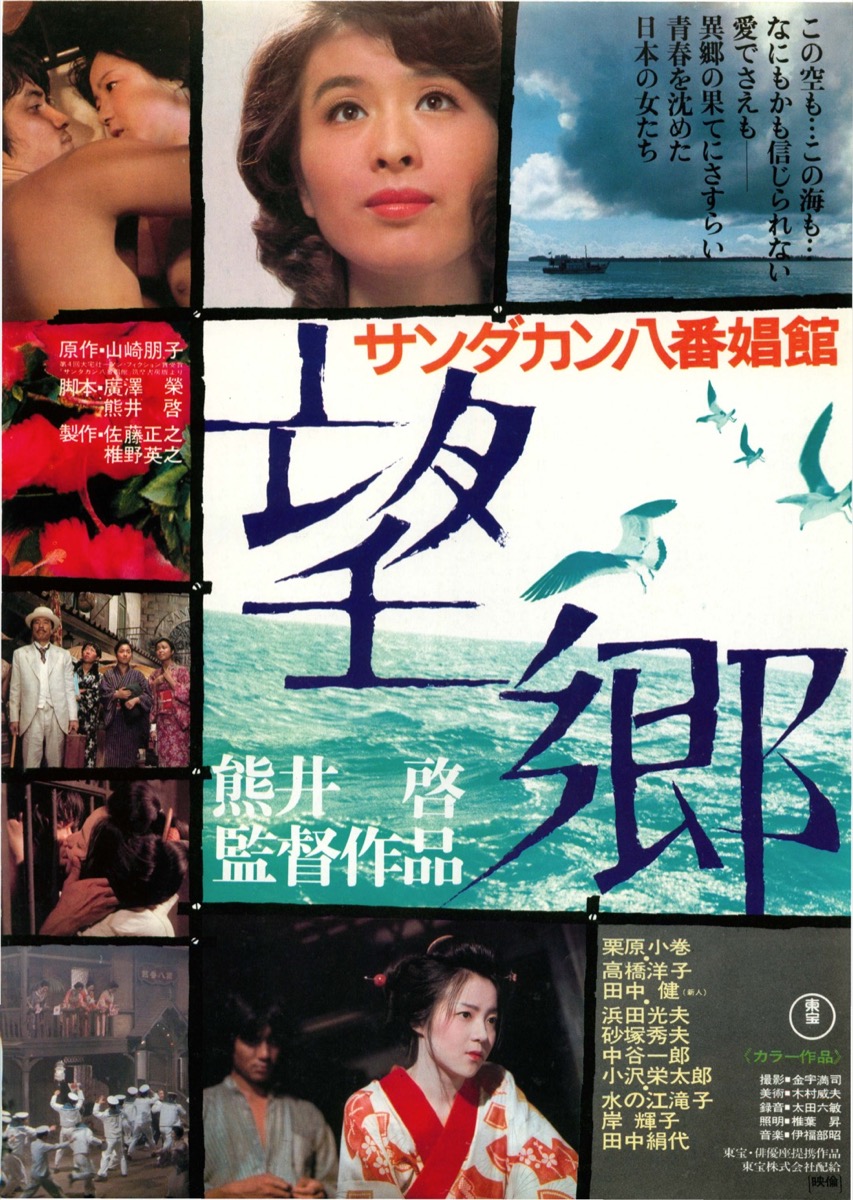 Some might argue that Japanese cinema has often been reluctant to examine the nation’s traumatic 20th century history with the proper rigour, but even if subtle and coming from unexpected angles there have been many and varied attempts to ask questions about the lingering consequences of feudalism. Sandakan No. 8 (サンダカン八番娼館 望郷, Sandakan Hachiban Shokan: Bokyo), inspired by a true life account of a woman unwittingly sold into sexual slavery as a child at the turn of the century, is not only a condemnation of socially approved people trafficking and its role in building the short-lived Japanese empire but a mild provocation of the contemporary society which refuses to engage with its traumatic past.

In the contemporary era, graduate student Keiko Mitani (Komaki Kurihara) is engaged in researching the “karayuki-san” – Japanese women who were sold into sexual slavery throughout Asia in the early 20th century. Almost forgotten, the karayuki-san are a taboo subject and even those still living in the areas from which women and girls were sent away are unwilling to speak of them. By chance, however, Keiko runs into an old woman in a cafe who speaks with a standard Tokyo accent and tells them that she spent most of her life “abroad”. Quickly realising she doesn’t mean she was a diplomat’s wife, Keiko wonders if the woman might be have been a karayuki-san and delays her return to Tokyo in order to find out.

There is something, it has to be said, ironically exploitative in Keiko’s determination to get the old woman, Osaki (Kinuyo Tanaka), to open up about a subject on which she so obviously does not want to be drawn. A visit to Osaki’s home reveals her to be living in a run-down hovel on the edge of town which is filled with stray cats whom Osaki feeds because “they’re all abandoned, but still they have to live”. Keiko gets herself brownie points by reacting politely to Osaki’s reduced living situation, eventually staying three weeks during which time she gradually teases out Osaki’s sad life story. Finally asking if there wasn’t anything Osaki might have liked to know about her, Keiko’s hypocrisy is fully brought home to her when Osaki admits that no one was more curious about Keiko than she was but that “people have reasons for not confiding in others” and if it’s something you need to ask about then it’s probably something that the other person may not want to share. In any case, Osaki seems to have known Keiko had an ulterior motive but does not regret sharing her story and has no worries about what Keiko might do with it as long as she makes sure to tell the truth.

The truth, in a sense, seems to be something the villagers feel themselves well acquainted with which is why Osaki lives in a shack on the edge of town. Tricked into sexual slavery as a child by an amoral people trafficker who lured her with promises of money to be made overseas, Osaki found herself in Borneo and a prisoner of “Sandakan No. 8” which was one of 10 numbered brothels on the island largely catering to Japanese travellers overseas, facilitating the expansion of the Japanese empire as accidental emissaries and ports of call. When Osaki was a child, Japan was a poor country and it was considered normal to sell one’s daughter in order to feed a family. Working overseas carried with it a kind of cache though no one, except perhaps her brother, seems to be fully aware of what Osaki is going to and she herself has not in any way chosen or consented to become a sex worker. When she eventually returns to Japan, she finds herself unwelcome in her brother’s house, which her money paid for, because of the shame associated with those who have “worked away”. Even 50 years later, she finds herself living alone, all but disowned by her only son, on the outskirts of her childhood village ostracised by the “respectable” townspeople who don’t for a second believe Osaki’s quick introduction of Keiko as her daughter-in-law.

The daughter-in-law deception is only one heartbreaking aspect of the complex relationship between the two women who are each, in a sense, hiding something from the other but end up forming a genuine connection anyway. Intensely lonely and having lived a life filled with suffering, Osaki is willing to pay for company with her story while Keiko is, not quite deliberately, using her loneliness against her in an attempt to earn her trust and get her to reveal her secrets. Nevertheless, Keiko is able to mine a rich and deep seem of 20th century trauma through the tragic story of just one woman which reaches out to hundreds like her some of whom rest in a graveyard in the forests of Borneo with their backs forever to Japan. The enemy is, once again, poverty more than it is patriarchy or even feudalism, a problem less of the essence in the rapidly improving post-war economy, but as Kumai is keen to point out, this system of state sanctioned people trafficking (finally outlawed only once Japan’s status on the world stage began to rise) had far wider implications than it might be thought which still echo into the present day and perhaps beyond if not for the efforts of women like Keiko who do not wish to forget.