Written by Hayley ScanlonPosted on January 14, 2016December 1, 2016Leave a comment 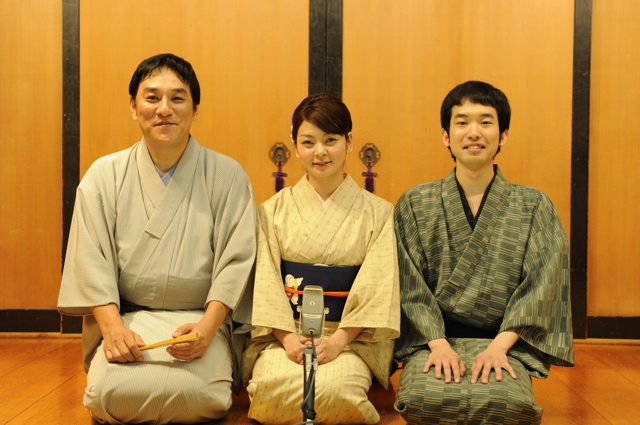 When it comes to the classic Japanese art forms, kabuki, noh and maybe even bunraku are not so uncommon overseas. Rakugo, however, has not been as lucky. Famously impenetrable for non-native speakers even if their language skills are otherwise top notch, rakugo is the art of traditional comic story telling in which the “rakugo-ka” recites a standard monologue with the aim of mining it for laughs in their own individual fashion. These stories date back to the Edo-era and rely heavily on classic Japanese puns, stock characters and cultural assumptions, consequently, their appeal has been on the wane in Japan for sometime. That’s not to say the art form is quite dead yet though, as real life rakugo-ka Shinpei Hayashiya’s Rakugo Monogatari attempts to prove.

The film begins as youngster Masato catches a Rakugo act and becomes immediately smitten. Hoping to become the disciple of a top master, he parks himself outside the house of Kozaru but is too shy to actually knock on the door. Luckily, Kozaru’s wife arrives home and spots Masato waiting outside. She’s a sharp woman and immediately guesses what Masato’s after so she invites him inside to meet her husband. Kozaru is a bit of a strange man but with a fantastic sense of humour and eventually agrees to take the young hopeful on as his pupil. There will be laughter and tears along the way but Masato is well on the road to achieving his rakugo dreams.

Created by real life rakugo comedian and occasional actor Shinpei Hayashiya, Rakugo Monogatari certainly has the air of authenticity. For a film that’s about an apprentice, we don’t really see a lot of direct training scenes (though there are some) and, in fact, we don’t spend all of our time on the hopeful Masato. After he starts to make some headway, the canvas widens a little to look at the arcane institution of the rakugo association and in particular its reaction to the decision of one of its female members to pursue a career in television which is taking her away from her rakugo roots. The position of female rakugo performers is briefly touched on as, though there are at least two highly proficient female rakugo-ka active on these stages, one of the other association members proclaims that he feels “uncomfortable” with a woman reciting this material at an important event. He says this right in front of an apparently high ranking female member of the association who looks rightfully non-plussed (and in general she is not a woman to be crossed lightly) before trying to back track. The younger female rakugo-ka eventually gets to perform but then has her profile immediately undermined by a personal scandal that would probably not have much effect on a male star’s career.

Hayashiya does give in to melodrama in the third quarter though he largely even manages to work a few laughs into a tragic situation. The other thread of the film is the warm and solid relationship between Kozaru and his wife Aoi, which is filled with a sort of bickering, reciprocal humour as the two become surrogate parents to the nervous Masato. In an odd sort of way it’s Aoi who lends the heart to the film and though her role is purely supportive, she provides the firm foundations which allow her husband and his new apprentice to flourish in their own careers.

A perfect tribute to the art of rakugo, Rakugo Monogatari is an affectionate comedy celebrating all sides of its famously complicated world. Though it runs a little long and has a tendency to run off the point for a while (perhaps an intentional complication), Rakugo Monogatari nevertheless proves an enjoyable foray into the world of this declining art form and finds plenty left to enjoy while it’s there.