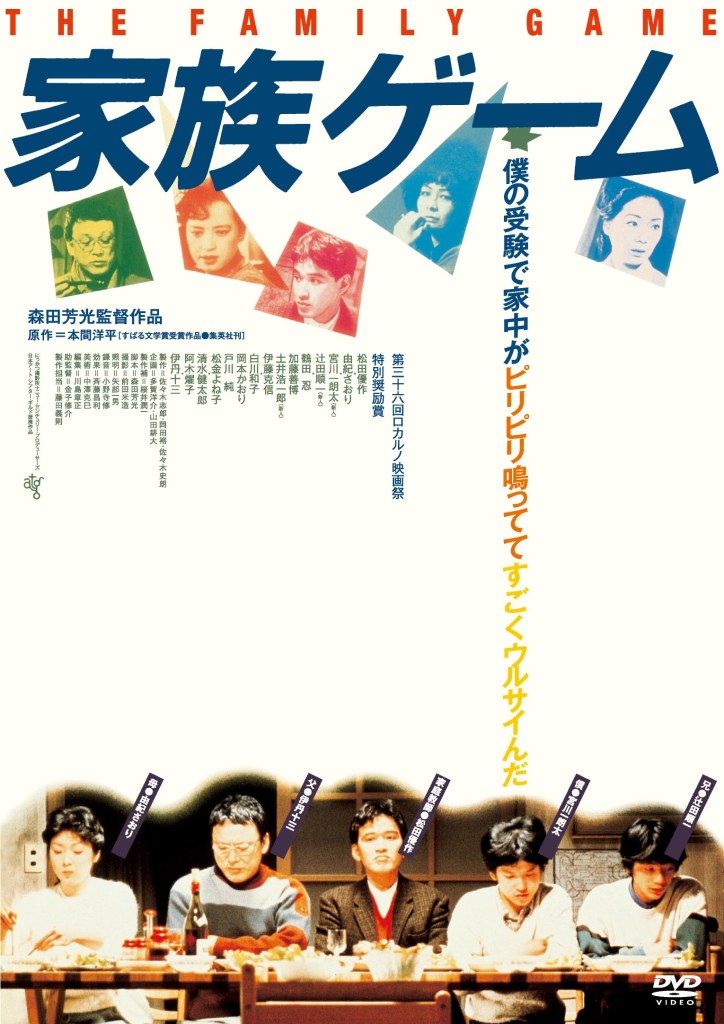 “Why do we have to make such sacrifices for our children?”. It sounds a little cold, doesn’t it, but none the less true. Yoshimitsu Morita’s 1983 social satire The Family Game (家族ゲーム, Kazoku Game) takes that most Japanese of genres, the family drama, and turns it inside out whilst vigorously shaking it to see what else falls from the pockets.

The “ordinary” middle class Numata family consists of the salaryman father Kosuke, the regular housewife mother Chikako and their two sons – older brother Shinichi and younger brother Shigeyuki. Right now the focus of attention is very much on Shigeyuki as he approaches the difficult period of sitting entrance exams for high school. To be frank, Shigeyuki’s prospects are dismal. He ranks near the bottom of the class and though certainly bright has little interest in studying. Therefore, the family have decided to bring in a home tutor to help boost his grades. They’ve already tried several to no avail but have high hopes for Mr. Yoshimoto, a local university student, but little do they know that he’s going to end up teaching each of them a little more than they cared to learn.

Morita breaks down the modern family into its component parts and finds only archetypes representing the kinds of roles which are rigidly enforced by Japan’s conformist society. Let’s start with the “father” who is supposedly the head of the household yet barely has anything at all to do with it. He believes his role is simply to go to work and shout commands which his “family” are supposed to follow unquestioningly. His realm is everything outside the house, everything inside is the responsibility of his wife and he won’t in any way get involved with that. When he has a problem with the kids (and this problem will only be that they aren’t performing to expectation), he will tell his wife and she is expected to take care of it on her own. Of course, his authority is hollow and dependent on his family falling in with his preconceived ideas of their “individual” roles.

The wife, then, is more or less a glorified housekeeper in charge of domestic arrangements and expected to remain within the home. Barked at by her husband and treated like a servant by her own children, her existence is often a fairly miserable one. She remarks that she wishes she’d had her children later – there were so many things so wanted to do that now are denied her because she’s forced to “play the role” that’s expected of her as a wife and mother.

Of the two kids, the older brother, Shinichi, starts the film as the one who plays his pre-ordained role to the level that’s expected of him. He’s a bright boy who studies hard and got into the top high school no problem. As the film goes on and everyone’s obsessed with Shigeyuki, Shinichi’s mask begins to drop as he encounters various typically teenage phenomenons which interfere with his role as over achieving big brother.

Shigeyuki, however, refuses to play the game at all. He just does not care. He loves to get under people’s skin and takes pleasure in annoying or outsmarting them such as when he cons his mother into letting him skip school (his pancreas hurts!) which she lets him do probably knowingly because she’s still playing her role as the worried mother. Finally he only begins to study when he realises it annoys a fellow pupil when his grades improve.

When tutor Yoshimoto enters the picture he tears a great big hole through the centre of this perfect family photo. He starts by behaving very strangely with Mr. Numata by grabbing his hand and calling him “father” whilst leaning in far too close for a casual acquaintance. Similarly when he first meets Shigeyuki he leans right in and then remarks that he has “a cute face”. He proceeds to invade Shigeyuki’s physical space by regularly touching him to a degree which is odd for a teacher/pupil relationship and is almost a prelude to molestation. When Shigeyuki tries to troll him by filling pages of his notebook with the same word over and over again, Yoshimoto reacts coolly before punching him in the face. From now on, when Shigeyuki isn’t pulling his weight, he’ll get a bloody nose.

Gradually Yoshimoto begins to take over the parental roles of the household firstly by instigating the masculine discipline through violence that Mr Numata is never there to deal out as well as offering the original role of teacher/mentor which might ordinarily be found in a grandfather or uncle. Later he usurps the big brother’s place by trying to talk frankly about sex and teaching Shigeyuki how to defend himself against playground bullies which also helps the boy cement a friendship with a sometime rival. Finally, he takes on the maternal mantle too when Mrs Numata asks him to go down to the school and talk to Shigeyuki’s teachers on her behalf. By the time that his original mission is completed he’s well and truly infiltrated the household allowing him to, literally, overturn its sense of stability.

Morita’s screenplay is witty affair full of one liners and humour born of unusual frankness. Family is a fake concept which forces each of its members into predefined roles and is largely divorced from genuine feeling. What matters is the appearance of normality and the acquisition of status – i.e getting into the better university, not so much as a path to success but as a way of avoiding the embarrassment of not getting there. An absurdist social satire, The Family Game is a biting critique of the social mores of the early 1980s which punches a gaping hole through the foundation of traditional Japanese society.