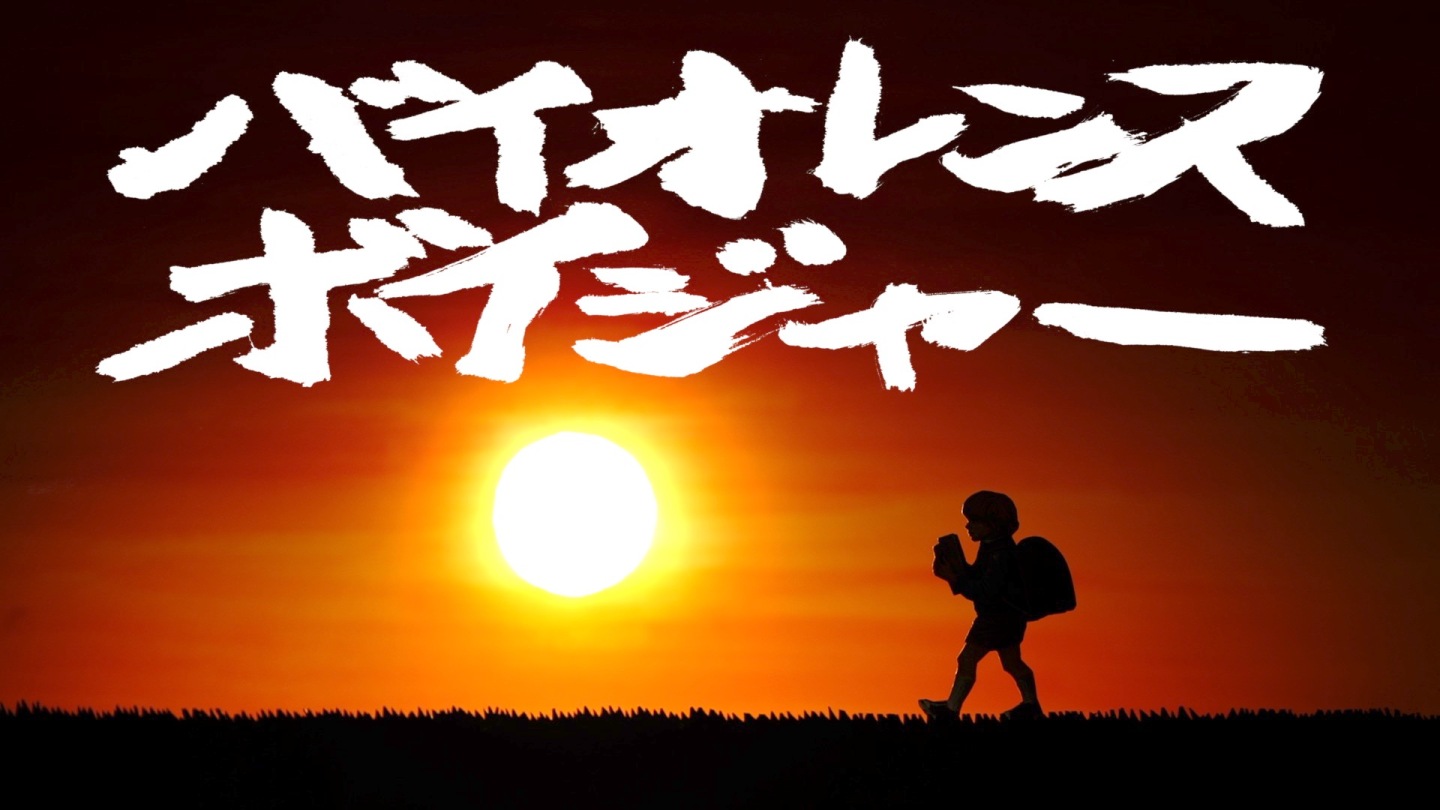 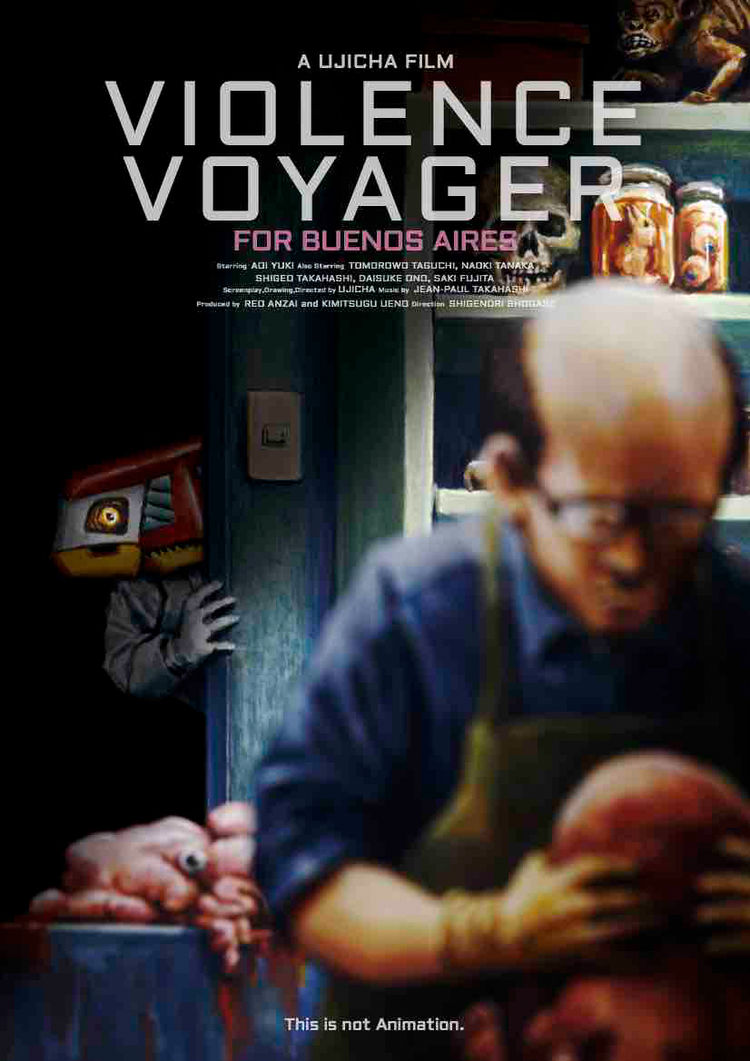 Weird stuff happens out in the mountains, stuff you wouldn’t even believe. Ujicha’s Burning Buddha Man followup Violence Voyager (バイオレンス・ボイジャー) is a pleasantly retro treat, set sometime in the more innocent past when the landscape still held hidden mysteries for small boys to find and anything goes so long as you’re home in time for tea. There are some mysteries, however, that it’s better not to solve and if something seems too good to be true, that’s usually because it is. Little Bobby (Aoi Yuki) is about to become a hero, but his journey will be a one way trip of unwelcome transformations, losses, and betrayals.

Bobby, an American boy with a blond bowl cut living in a little rural town with his distant dad and bedridden mum for otherwise unexplained reasons, has impressed his best friend Akkun (Shigeo Takahashi) with his high-tech pinball baseball computer console he made for the science fair, even if it has put the strange monster toys Akkun and his brother Yakkun entered with the intention of masking a lack of skill with pure strangeness to shame. Ostracised by the other kids, Bobby and Akkun long to cross the mountain and find their other friend, Takaaki (Daisuke Ono), who moved away to the next village. Akkun has heard tell of a secret mountain path which would take them there for free and it’s only *slightly* dangerous even if it does take time. Luckily it’s the summer holidays so time is something the boys have plenty of.

Setting off despite the warnings of Old Man Lucky Monkey (who actually lives with a chimpanzee as a “friend”), the boys are sidetracked when Bobby spots a fallen sign for something called “Violence Voyager” which sounds like too good an opportunity to miss. Ending up at an abandoned theme park, the boys are surprised to find the proprietor (Tomorowo Taguchi) still hanging around and overjoyed when he offers to let them in for free seeing as he rarely gets any business owing to the rapidly declining number of children in the area (alarm bells should be ringing right about now). Handed a “voyager suit” (an anorak and pair of wellies), the boys are shown an informational video explaining that the world has been invaded by aliens in the form of robot soldiers who shoot alkaline from their plant-like hands. Choosing a “weapon” (water pistol) each (Bobby a rifle, Akkun a tiny little dolphin), the boys set off but it’s not long before they start to suspect something isn’t quite right. Discovering another little girl lying injured, Bobby and Akkun plan an escape only to find their bullying classmates also facing the same dilemma.

It will come as no surprise that there really is something not quite right going at Violence Voyager. Like a combination of Westworld and Soylent Green, the park exists to strip the young of their innocence by exploiting it. A mad scientist desperately trying to save his only family is literally eating his young – sacrificing the souls of innocent children and “remaking” them in his own image to feed his ruined son. Meanwhile, Bobby’s dad fights equally hard to track down and rescue his own errant boy from an obviously bad situation.

Bobby emerges scarred and fundamentally “changed” mentally and physically but with his humanity fully intact, carrying a pretty bunch of flowers to take to his mum to cheer up her sickbed (and presumably lessen the shock of seeing him as he now is). An extreme coming of age tale, Violence Voyager runs from exposing the cynicism of businesses aimed at children to the desperation faced by a parent prepared to protect their offspring at all costs (including their remaining family).

Ujicha’s trademark “geki-animation” is a perfect fit for the bizarre tale at hand, filled with beautiful hand painted backgrounds and accompanied by the sonorous narration of comedian Hitoshi Matsumoto (Symbol, Big Man Japan). The retro design from Bobby’s bowl cut to the ‘70s musical score and noticeably old-fashioned composition (one shot even seems to reference the poster for Fukasaku’s Virus) allows the warmth of nostalgia to mix with its less positive elements all while indulging in a surreal B-movie adventure which starts with “aliens” and ends with the horror that men do. Whether a metaphor for the conformist meat grinder which strips children of their individuality to trap them in the straight jacket of the salaryman world, the ravages of grief, or just a B-movie body horror adventure, Violence Voyager is a surreal fever dream of bodily corruption but undercut with its own sense of fantastical whimsy and an oddly innocent heart for so dark a tale.