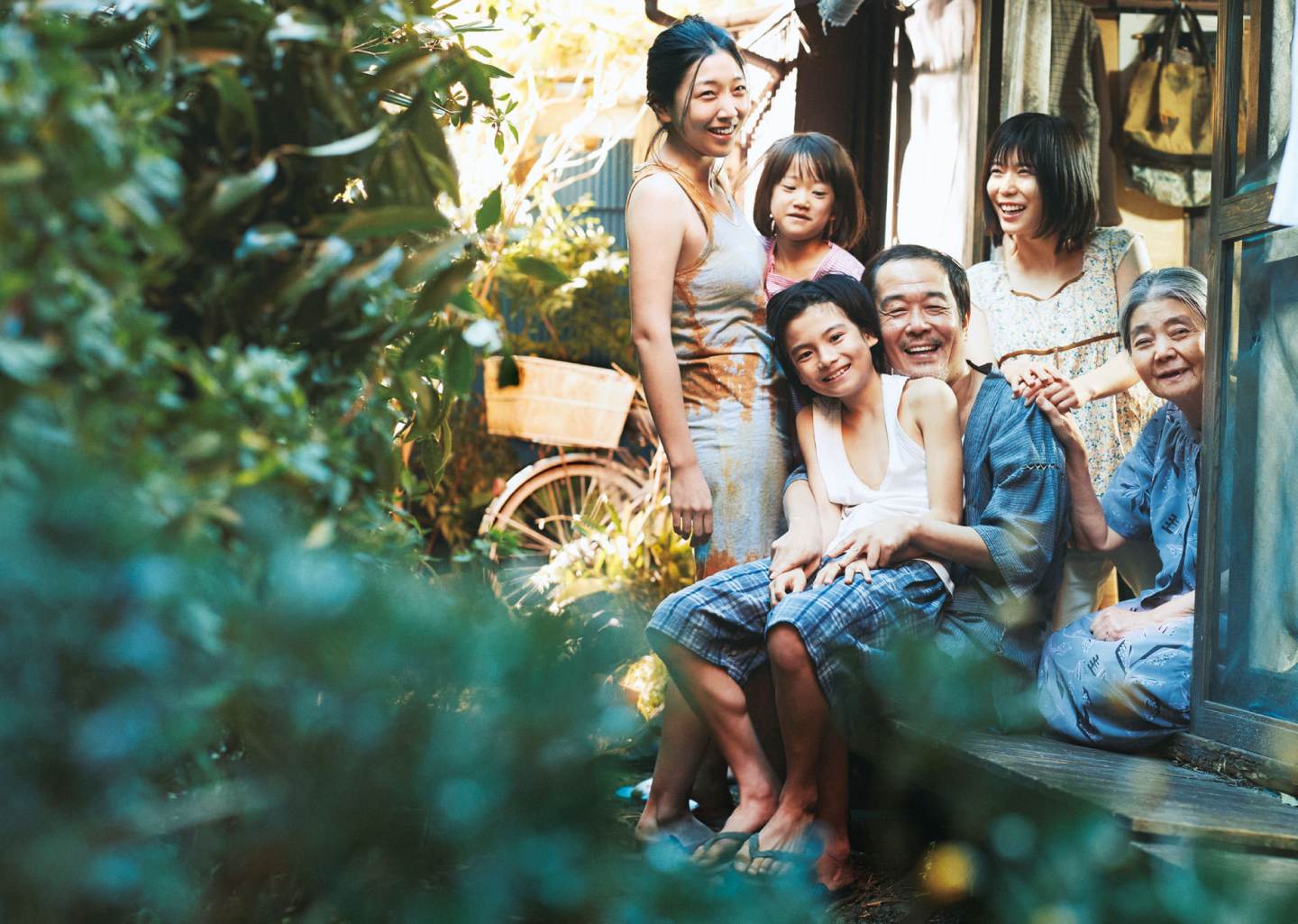 Tolstoy once said that all happy families are alike, but each unhappy family is unhappy in its own way. The family drama is the mainstay of Japanese cinema, though to be fair it rarely features families which are noticeably “unhappy” so much as struggling under the weight of social expectations. Nevertheless, since consumerism arrived in force, the concept of “the family” has come in for regular interrogation. That at the centre of Shoplifters (万引き家族, Manbiki Kazoku), Hirokazu Koreeda’s return to the genre with which he is most closely associated, are on one level among the happiest of families ever captured on film, but then again they are not quite like all the others.

The Shibatas live in a small Japanese-style house owned by “grandma” Hatsue (Kirin Kiki) whose pension (or, to be more precise, that of her late husband) makes up a significant portion of the family income. Patriarch Osamu (Lily Franky) has a casual job as a day labourer while his wife, Nobuyo (Sakura Ando), works in a laundry. Her “sister” Aki (Mayu Matsuoka) tells people she works as a kind of hostess but actually dresses up as a schoolgirl and performs sex services behind a two-way mirror in a sleazy club. Meanwhile, Osamu and Nobuyo’s “son”, Shota (Jyo Kairi), alternates his time between homeschooling himself and helping out with the family’s only other source of income – thievery. It’s after one partially successful foray to the local supermarket that Osamu and Shota come across a little girl, Yuri (Miyu Sasaki), stuck out on a balcony alone in the freezing cold and decide to take her home for something warm to eat.

Of course, this family itself is the very definition of makeshift. Osamu and Nobuyo may be a “real” couple, but no one else is actually related. The Family Game may have attempted to take the family apart and expose it as an artificial mechanism devoid of real feeling in which each is simply playing the role expected of them, but Shoplifters asks the opposite – if a found family can actually be more “real” that the real thing because it has been chosen, is wanted, and continues to function because of an organic bond between individuals which exists in the absence of blood.

In a sense, the family itself has been “shoplifted”. Later, under questioning, Nobuyo is accused of “throwing away” Hatsue but she corrects them – she didn’t and she wouldn’t. Someone else “threw away” Hatsue and she found her. Hatsue was abandoned by her husband who fathered a family with another woman, but seemingly not with her. Alone she longed for a family of her own and most of all to avoid the looming threat of a “lonely death”. Whatever else they might have gained from the “arrangement”, Osamu and Nobuyo are at least able to offer her the thing that would make her life complete as she prepares to meet its end. By the logic of the family drama, one family must be broken in order to forge another and it’s true enough to say that each member of the Shibata clan has been pilfered from somewhere else but in the end perhaps it’s better this way, free of the cold obligation of a blood or legal tie.

Then again, there are cracks in the foundation. Little Shota, growing fast into a young man, is increasingly conflicted about the way the family makes ends meet. Trapped in low paid, casual employment, Osamu and Nobuyo are working but poor, unable to support their family on their wages alone. Injured at work, Osamu is left without compensation because he’s only a day labourer and therefore not entitled to workplace protections while Nobuyo is eventually forced into a “workshare” arrangement and then to resign when her boss cruelly tells her and a friend that they can decide between themselves which of them gets to keep their job. They steal because they’re hungry, but also perhaps because they enjoy this small way of rebelling against the system. Osamu tells Shota that stealing from stores is OK because no one really “owns” anything while it’s still on the shelf, but Shota begins to doubt his logic. It’s not just “taking”, it’s taking “from” and Shota is increasingly worried about who it is their way of life may be harming. He worries that in taking in Yuri the family is corrupting her, indoctrinating her into their morally dubious universe.

Morally dubious it may be, but life with the Shibatas is warm and safe which is a lot more than can be said for Yuri’s life with her birth parents who don’t even bother to report her missing – social services eventually figure out she isn’t around two months later and come to the conclusion that the parents may have got rid of her in some unspecified way. Which sort of “corruption” is worse – an upbringing filled with abuse and neglect, or one filled with love and habitual criminality? Yet it’s an act of love that finally breaks the family apart and leaves them at the mercy of cold and official forces too obsessed with their own sense of narrative to bother listening to the “truth”. Shoplifters wants to ask if the “natural” laws of society still serve us when little girls fall through the cracks and our definition of “family” is so narrow and rigid that it denies us a way of saving them. Sometimes the found family is stronger than the inherited one, but society is primed to crush it all the same in its relentless and indifferent quest to preserve the social order.