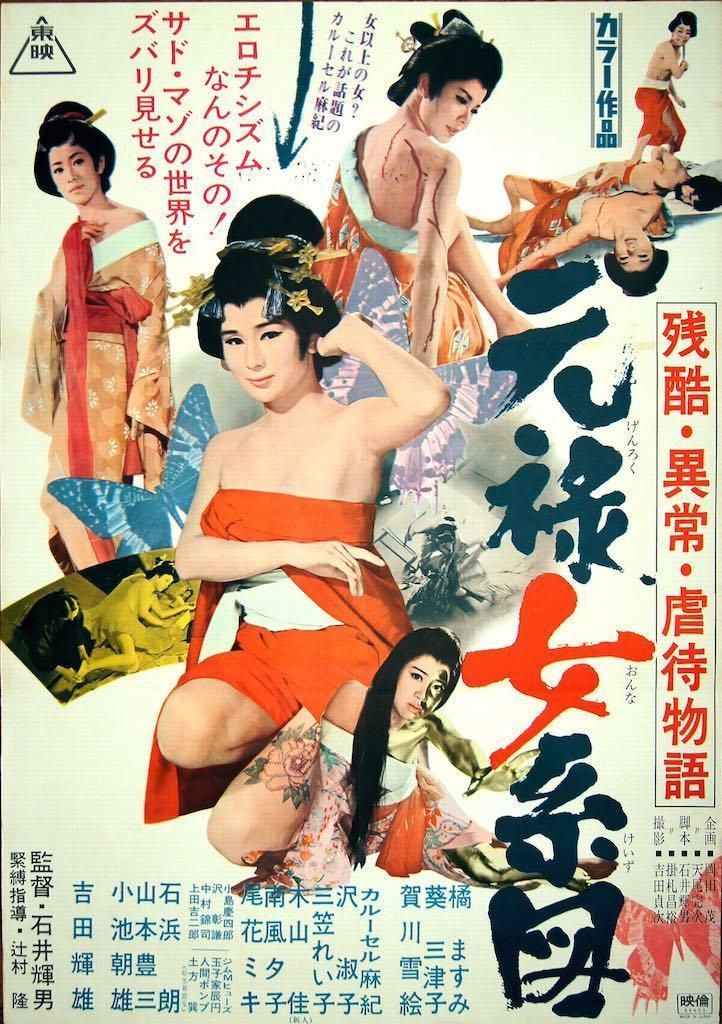 “Pinky Violence” is a strangely contrary genre, often held up both as intensely misogynistic but also proto-feminist in its vast selection of vengeful heroines who seemed to embody the rage of several centuries of inescapable oppression. Teruo Ishii, at the very forefront of Toei’s attempts to graft pink film sensibilities onto its house style of manly yakuza drama, had a definite love for the perverse but, perhaps unusually, a consciousness of the implications of his world of surrealist violence. The Japanese title of Orgies of Edo (残酷異常虐待物語 元禄女系図, Zankoku Ijo Gyakutai Monogatari: Genroku Onna Keizu) translates as something like “a genealogy of the women of the Genroku Era” and concerns itself with three tales of misused women each of whom meets a grim end at the hands of faithless men who seem to embody the decadence of their prosperous times.

Ishii’s three tales of increasing madness and brutality travel from the streets to the palace in locating each scene of mounting debauchery within the shifting circles of prosperous Genroku era Edo. Our guide, positioned to the side of each of the tales, is a conservative doctor (Teruo Yoshida) who diagnoses his society as morally sick and hovering on the edge of a decadent abyss. Tellingly, each of episodes with which he becomes involved is presaged by his inability to access foreign knowledge in the wilfully isolated nation, slowly stagnating even in the midst of unprecedented prosperity.

His first patient is a young woman in the middle of a painful miscarriage caused by a beating intended to end her pregnancy. Abroad they know of an operation to avoid this sort of misery, the doctor muses, but he has no way of helping her. The young woman, Oito (Masumi Tachibana), like many in the tales of old Edo, got into debt and then was seduced by a handsome young man who posed as a saviour but only ever meant to misuse her. Hanji (Toyozo Yamamoto), a gangster, presses her into prostitution and eventually betrays her by taking up with another woman but neither of them are free of their respective captors be they the Yoshiwara or the gangster underworld.

The doctor’s second case is more extreme and calls upon him to make use of his knowledge of the Western notion of psychiatry in trying to cure a young noblewoman of her perverse fetish for the physically deformed. Ochise’s (Mitsuko Aoi) tastes stem back to a traumatic teenage incident during which she was abducted, held prisoner, and repeatedly raped by a man with a ruined face. Her loyal servant, Chokichi (Akira Ishihama), has long been in love with her but the pair remain locked in a one sided sadomasochistic relationship in which he knows that she can never return his love not because of their class difference, but because of his “perfection”. Pinching an ending from Tanizaki’s Shunkinsho, Ishii sends the frustrated lovers in a less positive direction in which a woman’s defiant insistence on pursuing her own desires is met only by the violence of a male need for possession which eventually leads to mutual destruction.

Mutual destruction is a final destination of sorts. The doctor’s third unrealisable request is for an untimely caesarian section – another piece of Western medical knowledge he has only vague awareness of. This unusual situation unfolds at the court of a lascivious lord whose perverse proclivities are quickly becoming the talk of the town. Drawn to a young woman, Omitsu (Miki Obana), who greets his attempt to fire his arrows at her while angry bulls with flaming horns charge at his other concubines with excitement, the lord is dismayed to hear of another of his ladies, Okon (Yukie Kagawa), enjoying the attentions of her pet dog and therefore somehow sullying his own bedroom reputation. The lord has Okon painted gold and thrown in a hall of mirrors for a slow and painful death of multiplied suffocations but she wins a temporary reprieve by promising to introduce him to untold pleasure if only he lets her live. This will all end in flames and ashes, but the lord hardly cares because it is only the natural end for his hedonistic endeavours.

The doctor performs his miracle and emerges with a child in whom lies the legacy of this immoral time. Yet the doctor wants to “save” it. Even if it’s a “beast” the child is innocent, he intones, insisting that he must live despite this burden in order to resist the madness. Like the strange butoh inspired performance art which opens the film, these are times of madness and confusion in which women, most of all, suffer at the hands of men who care only for their own pleasure. The doctor tries to cure the “sickness of the soul” that he sees before him, but knows that cannot be excised so much as tempered. Still he walks forward, away from the wreckage, with the future in his arms and resolves to live whatever the cost may be.