Written by Hayley ScanlonPosted on March 1, 2019Leave a comment 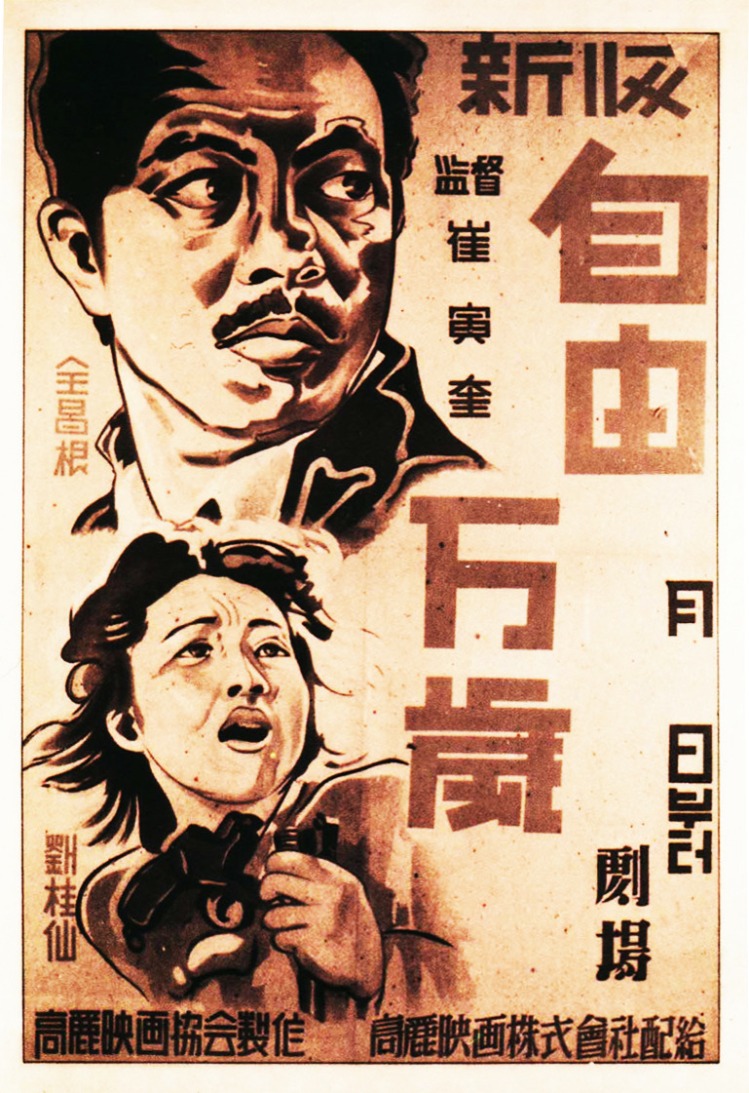 Attempts to foster a Korean film industry had often been frustrated during the colonial era throughout which aspiring filmmakers found themselves dependent on the Japanese film industry for financial and technological assistance while forced to produce increasingly overt Imperial propaganda under the ever tightening grip of the militarist colonial government. Hurrah! For Freedom (自由万歲 / 자유만세, Jayu Manse), the first film produced after the liberation, was then an aptly titled chance to start anew, create a new film language for a new young nation finally free of what some saw as decades of brutal oppression which made successive attempts to erase a national character.

Sadly, we cannot quite know exactly what director Choi In-kyu intended to create with this the first truly “Korean” film because so little of it survives intact, not because like much colonial cinema it was simply lost but because it bears witness to the next chapter in Korea’s unhappy 20th century history in undergoing severe editing during the oppressive era of Park Chung-hee’s military government who decided to remove scenes featuring popular pre-war actor Dok Eun-gi who, like many in his position, eventually defected to the North after the Korean war. As for Choi himself, he perhaps felt he had some atonement to do for having remained complicit with the Imperial machine. Following the completion of 1941’s Angels on the Street, he’d vowed to never to direct another pro-Japanese film but was eventually persuaded to return by the right-wing Han Hyung-mo (also the cinematographer on this film) and made a further three propaganda movies the last of them in 1945.

Nevertheless, Hurrah! For Freedom opens with a tribute to those brave Resistance fighters who gave their lives for liberty. Our hero is cell leader Choi Han-joong (Jeon Chang-geun – also the film’s scriptwriter) whose friend is killed while fleeing from Japanese police after being denounced by collaborator Nam-bu (Dok Eun-gi). Forced into hiding, Han-joong is lodged with a friendly nurse, Hye-ja (Hwang Ryuh-hee), who seems to have become fond of him though he remains distracted by his Resistance activities even if he does eventually notice the flowers that she bought him as a token of affection. While saving another comrade from the police and rescuing some explosives in the process, Han-joong ends up taking refuge in the flat of none other than Nam-bu’s main squeeze Mi-hyang (Yoo Kye-sun) who also develops a crush on him.

Though Nam-bu, an obvious bad guy antagonist, is sidelined by the demands of ‘70s censorship, the main thrust of the drama is conveyed by the melancholy figure of Mi-hyang who eventually becomes a symbol of betrayed, thwarted ambition and the relative impossibility of redemption for those who made “weak” choices during the colonial era (as you could perhaps accuse Choi himself along with the entire film industry of having done). Mi-hyang, having fallen for Han-joong’s passionate intensity, decides to betray Nam-bu by giving valuable information she has obtained from him to the Resistance, little knowing she has been weaponised in a plot laid by her vindictive former lover.

Nevertheless, her true love confession is rejected by Han-joong whose only lover is the revolution. Han-joong, reminding her that he is a man who could be killed at any moment flits between talking of his bright future and his dark end. He reassures Mi-hyang that, despite her past, she like everyone else has the right to start again but coldly insists that she does not have what it takes to join the cause and should return to her hometown and safety. Denied the right to be by his side in life, Mi-hyang affirms that she will be the one to tend Han-joong’s grave, suddenly returning this talk of new beginnings to the nihilistic struggle which seems to define Han-joong’s existence.

Nevertheless, in contrast with the defeated figure of Mi-hyang who must pay not only for her “weakness” in complicity with the colonial regime but also for her sexual transgression with an “enemy”, the saintly Hye-ja remains pure and brave – a brighter mirror for the gloomy Han-joong who seems surely destined to be her romantic hero as the pair of them fight earnestly for a freer future. Sadly, this is where we leave them – in media res as the film cuts out just at its most climactic moment as if affirming that this is a revolution very much in progress. Choi, shifting away from the realism that defined his earlier work, seems to be reaching for a new cinematic language with which to begin a new era free of colonial constraints. History, however, would defeat them all as this short period of hard won liberty would lead eventually to another conflict and another oppressive dictatorship. Choi himself went missing during the Korean War, presumably either killed or fled to the North. Nevertheless, what we can discern from the extant lessons of Hurrah! For Freedom is that there was perhaps more appetite for nuance than might have been expected even if sympathy for the collaborator does not quite extend to forgiveness.