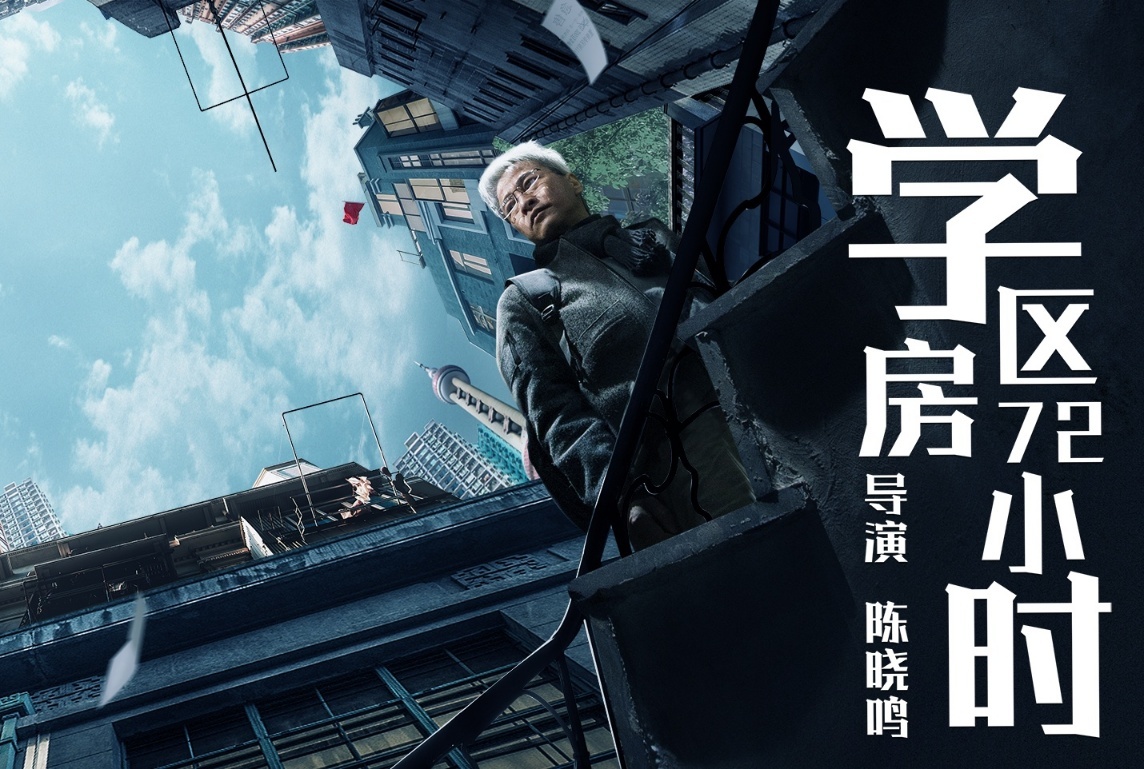 Written by Hayley ScanlonPosted on June 30, 2019

“Win at the starting line” has become something of buzzword among parents eager to get their children the best start in the modern China where equality is no longer regarded as a social good. Even in the UK it’s not unusual for parents to go to great lengths to game the system so their children can get into the “better” state schools, but in China where educational background really can make or break a child’s future the stakes are obviously much higher. For the father at the centre of Chen Xiaoming’s biting debut, the ironically titled “If You Are Happy” (学区房72小时, Xuéqū Fáng Xiǎoshí), the stakes are very high indeed as he bets pretty much everything – his family home, his career, and finally his integrity, on buying a grotty little flat in the rundown part of town where he grew up solely because it’s directly opposite the best primary school in the area.

University professor Fu (Guan Xuan) is a doting father to little daughter Cheng, but as keen as he is to keep up the facade of success his private life is falling apart. His wife, Jiayuan (Fu Miao), is suffering from long term depression and though Cheng seems cheerful, the atmosphere at home is frosty at best with husband and wife barely speaking. Meanwhile, Fu has also been carrying on an illicit affair with one of his students, Hang (Tu Hua) – a wealthy young woman whose mother (Rong Rong) is keen to send her abroad for graduate school to improve her prospects. Hang doesn’t want to go, she says because she’s become attached to Fu, but there are also rumours all over school about teachers accepting bribes to change students’ grades and the jury’s out on whether Hang has ulterior motives.

The main source of stress in Fu’s life is however his ongoing quest to buy a flat in the catchment area of a prestigious primary school. After two years of dashed hopes, an old friend working as an estate agent has a promising lead on a place that’s actually right by where they both grew up. Though the flat is in a bad state and really too small for a family (assuming they actually meant to live there), Fu is loathed to give up the opportunity even though he doesn’t have the ready cash together to seal the deal. Despite his outrage at the teachers who take bribes, he tries to force his friend to pull some strings before coming to the conclusion he’ll have to sell his flat. Fu goes ahead and lists it with another estate agent before even talking to his wife who is understandably not keen to move, insisting that the school around the corner is fine, only for Fu to snobbishly tell her that it’s fine for kids like Tao – a naughty little boy at kindergarten who accidentally slashed Jiayuan’s hand when he somehow got hold of a kitchen knife.

Fu’s snobbishness is perhaps his defining characteristic. Forced to sell his family home, he bristles when the maid mentions that her son is looking for a flat, coming up with all sorts of excuses as to why he shouldn’t be able to afford it before accepting that money’s money no matter who it comes from. Auntie Niu’s (Xu Xing) son Bao (Liu Xiaodi) has troubles of his own, as they discover when paying him a visit and finding him near suicidal because his fiancée is thinking of breaking things off as her family have refused their blessing for the marriage until Bao can get hold of a flat in a very specific area. Bao’s case is frustrated because he’s not originally from Shanghai and a new law prevents non-locals from owning property. Luckily his fiancée is a Shanghai native but he doesn’t have the money to buy in the escalating Shanghai property market and only has this shot with Fu because he is a “motivated seller” and needs the deposit as soon as possible to put down on the property near the school.

Along with a superiority complex, Fu is also something of a prig and makes a point of being upstanding and respectable, even trying to return a box of expensive tea gifted by Hang’s wealthy businesswoman mother in the hope of currying favour. When someone gazumps him on the flat, he has a minor meltdown insisting on legal action and lamenting the decline of morality in the modern society, but then he turns around and does exactly the same to Auntie Niu despite knowing exactly what the flat means for Bao and having given his solemn word when signing the papers. Such duplicity is too much for Jiayuan who finally finds herself gaining the strength to defy her domineering husband to side with Auntie Niu who really has gone and got a lawyer when betrayed by Fu.

How much getting Cheng into a good school is about Cheng and how much about Fu’s status anxiety is up for debate, but nominally at least all of this is supposed to be for his little girl even though the stress of Fu’s ongoing quest is quietly destroying the family home, has sent his wife into a debilitating depression, and finally robbed him of his personal integrity as he continues to debase himself all in the hope of getting his hands on a really horrible flat in an otherwise undesirable area. Chen closes with a series of (seemingly) real interviews with parents who’ve considered bankrupting themselves just to move into the catchment area of a good school. Most of them concede it isn’t worth it, but are tempted all the same even if they intensely resent the way their society is going. After all, shouldn’t all children be starting in the same place? Why should one school be better than another, and why should the children have to pay for being born to parents with fewer resources to help them? There may not be real answers for any of these questions, but they’re ones the modern China continues to grapple with as the egalitarian past gives way to the moral dubiousness of a consumerist future.

If You Are Happy screens on 3rd July as part of the 2019 New York Asian Film Festival.