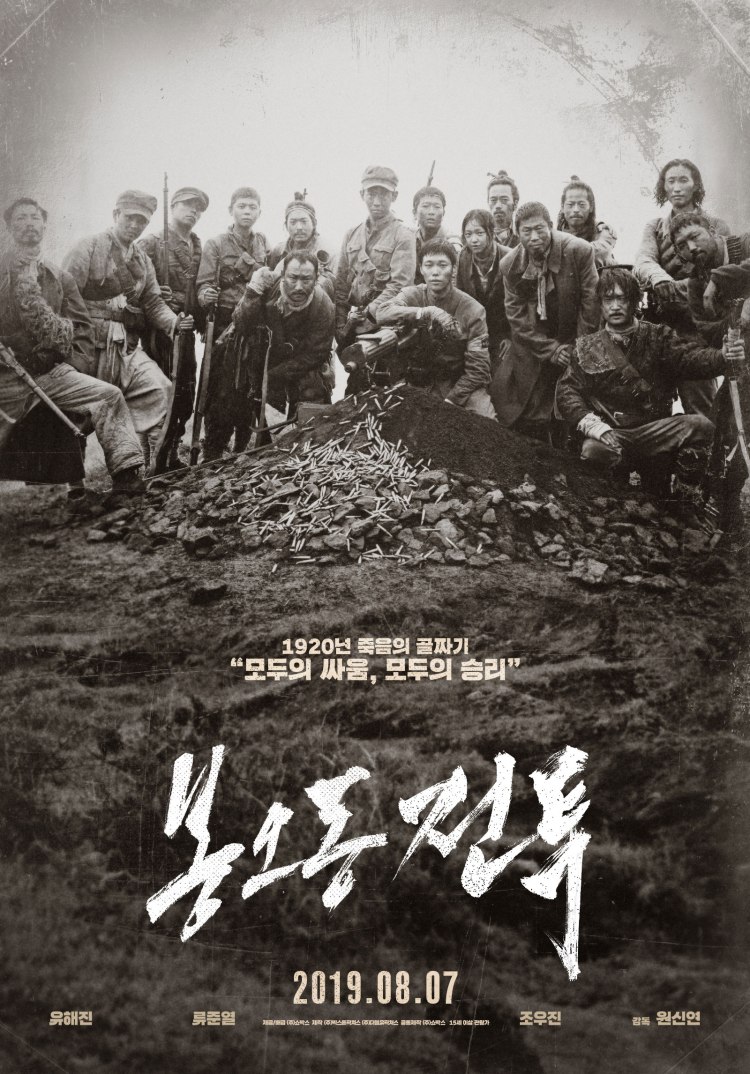 Besides seeing the birth of Korean cinema, 1919 was something of a flashpoint in the nation’s 20th century history. Japan had annexed Korea in 1910, thereafter instituting an increasingly brutal colonialist regime. On March 1, 1919 the people rose up in an act of mass protest inspired by the provision for “Self-Determination” included in US president Woodrow Wilson’s 14 Points speech outlining a path towards enduring peace. Though the protest was peaceful, it was quickly suppressed by Japanese troops resulting in thousands of deaths and mass incarcerations.

The Battle: Roar to Victory (봉오동 전투, Bongodong Jeontoo) situates itself a year after the protest as the Independence Movement began to intensify, and is inspired by real life events apparently often absent from the textbooks in which several factions eventually came together to wipe out an “elite’ squad of Japanese troops which had been put together to take down guerrilla Resistance fighters. Our heroes have been charged with collecting money from a fundraiser and conveying it to the Independence Movement in exile in Shanghai but are drawn into a wider battle against Japanese brutality on their way.

The Japanese colonial forces are indeed brutal, if often cowardly. When we first meet crazed commander Yasukawa (Kazuki Kitamura), he’s butchering a tiger in some kind of symbolic act of intense barbarity. To smoke out the Resistance fundraiser, the Japanese military begin razing villages, killing the men and raping the women, even going so far as to shoot small children for sport. When veteran Resistance fighter Hae-cheol (Yoo Hae-jin) raids a command post, he makes a point of taking a hostage who himself seems to be a teenage recruit. Hae-cheol lets the boy live not only out of a sense of compassion, but also because he wants him to take what he’s seen back to Japan, including the aftermath of a Japanese assault on an ordinary Korean village.

Yukio (Kotaro Daigo), as the boy later gives his name, is, unlike his fellow officers, conflicted and confused. Apparently a member of the elite himself, the son of a prominent military figure, Yukio gave up a bright academic future to join the army and find out what it is that Japan does with its advanced weaponry. Asked what he thinks now that he’s seen for himself, he says that he’s ashamed, that his worst fears have been confirmed. According to Yukio, his nation is suffering from an intense inferiority complex which is leading it to commit acts of extreme barbarity in order convince itself it is equal to any other imperial power.

The Japanese officers veer from the crazed, bloodthirsty Yasukawa who views his mission as some kind of hunting expedition, to the merely weak and cowardly. The Independence fighters, however, come from all over Korea speaking many dialects (some less mutually intelligible than others) and with many different motivations but all with the desire to free their country from Japanese oppression. Ace captain Jang-ha (Ryu Jun-yeol) is a born soldier, but those who support him are largely street fighters and “bandits” not always welcomed into the movement by the so-called intellectual “nobles” running the show from a position of social superiority. Then again, as Hae-cheol puts it, no one can be sure how many guerrilla soldiers there are because any farmer is a potential sleeper agent.

In any case, the Resistance fighters pursue their mission selflessly, manipulating the complacent Japanese troops to lure them into a mass ambush while trying to ensure the money still makes its way to Shanghai to preserve the movement. Despite the “Roar to Victory” subtitle, it’s important to note that the Independence Movement was still in a nascent state and would continue opposing Japanese oppression until Korea’s liberation at the end of the war. Covering the legendary battle of Battle of Fengwudong, the film ends with forward motion as the Resistance commander (a late and great cameo from a giant of Korean cinema) points ahead towards the next target, the well known Battle of Cheongsanri, in which the Japanese military reportedly suffered over 1200 casualties at the hands of Independence forces. Overly gory and lacking in subtlety, The Battle: Roar to Victory is unabashedly patriotic but does its best to suggest the costs and compromises of guerrilla warfare as its selfless heroes put aside their differences to fight for a better Korea.

The Battle: Roar to Victory was screened as part of the 2019 London East Asia Film Festival.