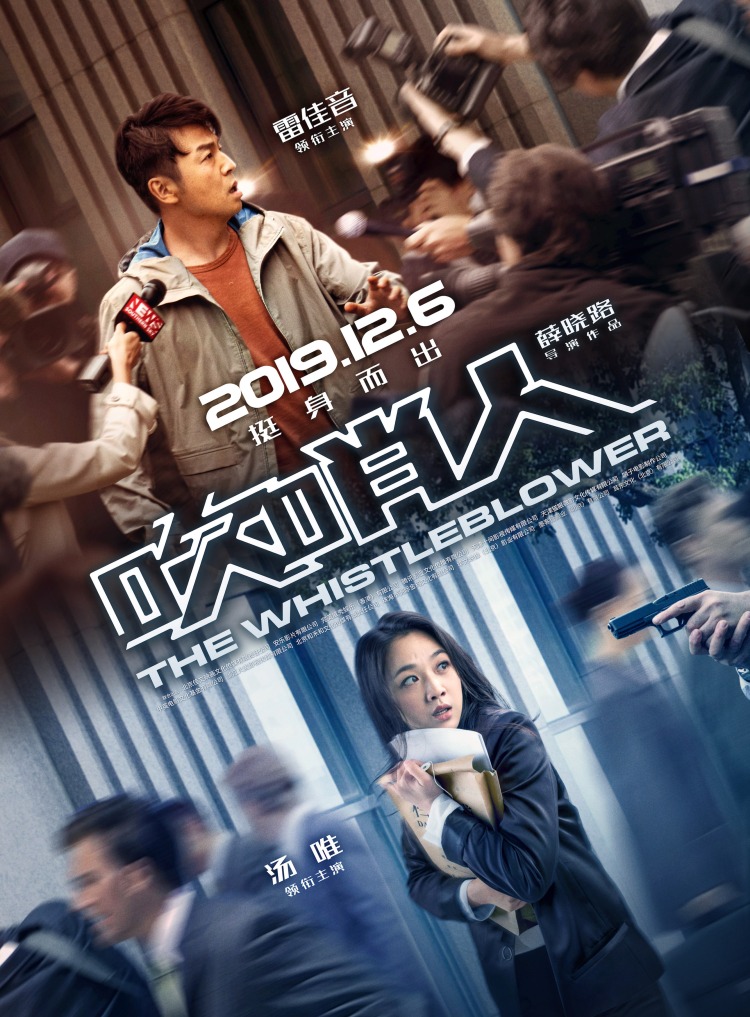 One of the many ironies of an intensely authoritarian system which prizes the self-criticism as a means of enforcing discipline is that whistleblowing, as opposed to “informing” on individuals, is not only frowned upon but actively dangerous. It is, after all, suggesting the Party may have made errors in judgement which have gone on to become systemic. It’s not surprising that the Party would not like to have them pointed out. Nevertheless, in these new times in which anti-corruption has become a minor buzzword, whistleblowing has been re-designated as a public service, though perhaps in not so much different a way as “informing” was in the old days and probably it very much depends on who and what one wishes to blow the whistle.

This the earnest hero of Xue Xiaolu’s The Whistleblower (吹哨人, Chuīshàorén) finds out to his cost when he is unwittingly alerted to a possible conspiracy and entrenched corruption among his co-workers. Mainland-born Mark (Lei Jiayin) works for a top Australian energy company keen to do business with China, though as they keep reminding him he is one of only two Chinese members of personnel, the other being the mysterious Peter (Wang Ce) whose unexpected absence is the reason Mark has been sent on a swanky but possibly illegal jolly to a resort to charm a delegation from a Chinese coal company. Two things immediately go wrong for him – the wife of the company’s (absent) CEO turns out to be his long lost first love Siliang (Tang Wei) who broke up with him because she wanted someone richer, and Peter turns up to the party in a dishevelled state to shout at him about something that happened in uni, which later turns out to be a coded clue to “check the gate”.

Needless to say, Siliang who seems to be in the middle of trying to break up with her husband, and Mark, who is married with a young son, “reconnect” before she dutifully runs off to a catch a plane which later crashes killing everyone on board. Peter is then found dead of an apparent insulin overdose, but even if he’s suspicious Mark doesn’t think much of it until he realises Siliang is still alive and on the run from her corrupt CEO husband who is apparently trying to have her killed because she knows too much about his dodgy dealings.

The Whistleblower tries to have it both ways in insisting that Siliang is simultaneously a greedy, ruthless, criminal mastermind, and such useless lady of the manor sort that she doesn’t know you can’t put metal in the microwave and is a terrible getaway driver because she’s always had chauffeurs. We’re told that she broke up with Mark because of his lack of materialism, marrying a top CEO for wealth and status and helping him conduct bad faith business by managing his bribes, but may now be conflicted – not only because her husband is trying to kill her, but because she’s realised her mistake and is attracted to Mark’s untarnished innocence. Her taste for corruption was, however, a moralistic one in that she would apparently never have condoned bribery if she knew that the technology really was unsafe and posed a threat to ordinary Chinese people.

It might be telling in one sense that this battle is being fought in Africa meaning that whatever problems there are with this innovative pipeline system are uncomfortably being worked out among less powerful people far away from either the Australian energy giant or the complicit Chinese coal company looking for new paths forward. The central implication, however, is that this kind of corruption is an element of Western imperialism rather than homegrown. The villains are the bigwigs at the Australian conglomerate, one of whom speaks fluent Mandarin but is apparently not much of a friend of China. Mark tries to expose them, turning against a company which is always keen to remind him that he is a foreigner (Australian PR pending), only to find himself at the centre of a smear campaign which seems like it would play much better on the Mainland, chased by thugs, and targeted for elimination.

The message that Mark gets, looking on with hope at a bright red sign reading “rebuild your life”, is come home – don’t do business with corrupt foreigners, help make China great again. A series of textual explanations appended to the film’s conclusion attempt to explain the word “whistleblower” to an audience that might not be familiar with it, pointing out that most developed nations have instituted legislation to protect those who attempt to expose illicit business practices but that China is lagging a little behind though it too apparently introduced legal protections in 2016 as part of its intensive drive to reduce corruption among petty officials. Mark has done the “right” thing, and he’s paid a price for it, but, the film says, his is the example to be followed in standing up to oppressive global corporate corruption which will eventually imperil the ordinary men and women of China if consumerist zeal wins out over national integrity.