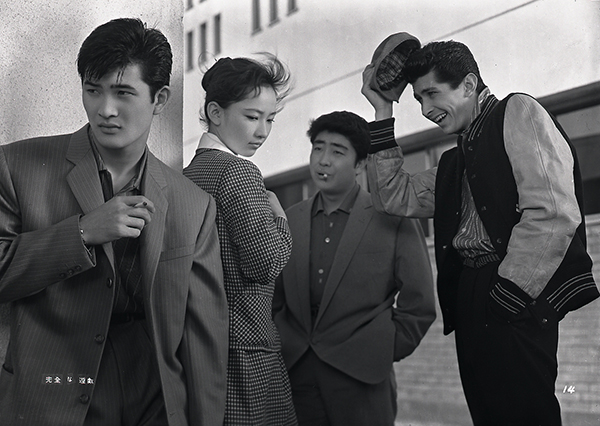 In the mid-1950s, Nikkatsu had courted controversy with a series of films depicting the amoral excesses of the immediate post-war generation. The “Sun Tribe” movies embedded themselves in a world of new bright young things who were largely independently wealthy and thoroughly bored by the ease of their lives. Nikkatsu was forced to halt production on the Sun Tribe films after only three (Toho and Daiei added one each of their own), but they did precipitate a wholesale shift towards youth movies which became the studio’s signature theme.

Best remembered for his contributions to Nikkatsu’s action noir, Toshio Masuda’s The Perfect Game (完全な遊戯, Kanzenna Yugi, AKA The Tragedy of Today) arrived two years after the Sun Tribe craze but neatly picked up the baton dropped by Kon Ichikawa’s Punishment Room in its tale of nihilistic college boy amorality. As the film opens, our four heroes are playing mahjong and lamenting their lack of funds. They are all, it goes without saying, middle class boys largely supported by their parents who, as far as we know, are high ranking salarymen. They are not hungry, or worrying about how to pay rent or tuition, they are just bored and want extra money to go out having fun before they they are forced into the corporate straightjacket with the regular salaryman jobs many of them already have in the bag thanks to the tremendous power of nepotism.

As the the opening text implied, they viewed their money making exploits as a game, proving how clever they think they are in getting one over on the universe, but all too quickly it spirals out of control. Toda (Yasukiyo Umeno), the ring leader, has come up with an ingenious money making scheme. It turns out that there’s an illegal betting office some distance away from the bicycle racing stadium that keeps taking bets until someone rings from the track and tells them who won, which means there’s about a five minute delay between the winner being declared and bets being called. The boys figure that if they can somehow beat the lag they can win big. To make it work, they ask their “friend” Kazu (Masumi Okada), who they seem to regard as a bit dim, to join them as well as recruiting an old codger to call the race before the boards go up. Surprisingly it works out, but unfortunately the yakuza-backed bookmaker, Matsui (Ryoji Hayama), wasn’t banking on such a big win and doesn’t have the funds to pay out in one go.

Toda in particular is pissed off. The wind taken out of his sails, he’s not sure what to do which is when So (Akira Kobayashi), the pretty boy of the group, suggests an ironic punishment. Matsui had joked that he’d put up his adorable kid sister Kyoko (Izumi Ashikawa) as collateral if he couldn’t pay out, so why don’t the boys take him at his word and kidnap her. Rewinding a little, these snotty college boys are about to become kidnappers, adding a little blackmail on the side. This isn’t a fun game anymore, someone is going to get hurt whatever happens even if they can’t know the extent to which their plan to earn a few bucks to blow on jazz bars and pool rooms is going to incur collateral damage.

Unlike the boys, Kyoko is a working class girl. She wants to keep her head down and work hard, not quite approving of her brother’s involvement with the yakuza and wishing he’d find an honest job but also acknowledging that he had few options and it’s his job at the bookies that’s been keeping them all this time. Their father died in the war, and their mother (Yumi Takano) is very ill, bedridden with heart trouble. Kyoko is no innocent, she brushes off So’s attempts to court her by revealing that dozens of creepy guys try the same thing every day, and most of them don’t stop at passing notes. For whatever reason she ends up warming to him, making him take her to a theme park while her mother worries at home, while he also begins to feel conflicted about the plan in falling for her for real.

So’s mistake is the childish belief that they’re still playing a game and everything will be alright in the end. He foolishly trusts that his friend’s are men of honour and that Matsui will come up with the money and redeem his sister in no time at all. But money’s not easy to come by even if you’re a yakuza, and the boys might not want it anyway if it comes with additional complications. Visiting with Kyoko’s sickly mother, he perhaps begins to see the gap between his comfortable existence and theirs of constant struggle. He’d been so proud to tell Kyoko that he had an interview lined up at a big company because of family connections, but when he arrives there he feels irrelevant. The interview board only ask him questions about his dad, as if he didn’t really exist. Finally they ask him to talk about what he did at uni, what his “passions” are, if he did anything of note in the past few years, perhaps even fall in love? They’ve unwittingly touched a nerve, but So is in any case forced to reflect on the meaninglessness not only of his adolescence, but of his future. This interview has been a farce, but they’re giving him the job anyway because he’s his father’s son. What more is there to say?

The other boys are also worried about their job prospects, concerned that someone might talk and they’ll be forever tarnished by “youthful exuberance”, refusing to take any personal responsibility for the consequences of their “perfect game”. Unlike So they still want to live in that inherently unfair world which exists for upperclass men to do as they please. Toda and So weren’t quite like their friends. They felt conflicted. Toda embarrassed to be borrowing money from his girlfriend but rejecting the others’ belief that you don’t have to pay women back, only to angrily bark at her that there’s “no way a woman can understand” the intensely masculine debate he’s just had with So about responsibility, which he accepted by deflecting in pushing So’s complicity back on him in an attempt to share his guilt. Unlike the Sun Tribe films, youth takes responsibility for itself and its friends, but can find no way to atone for its moral abnegation.