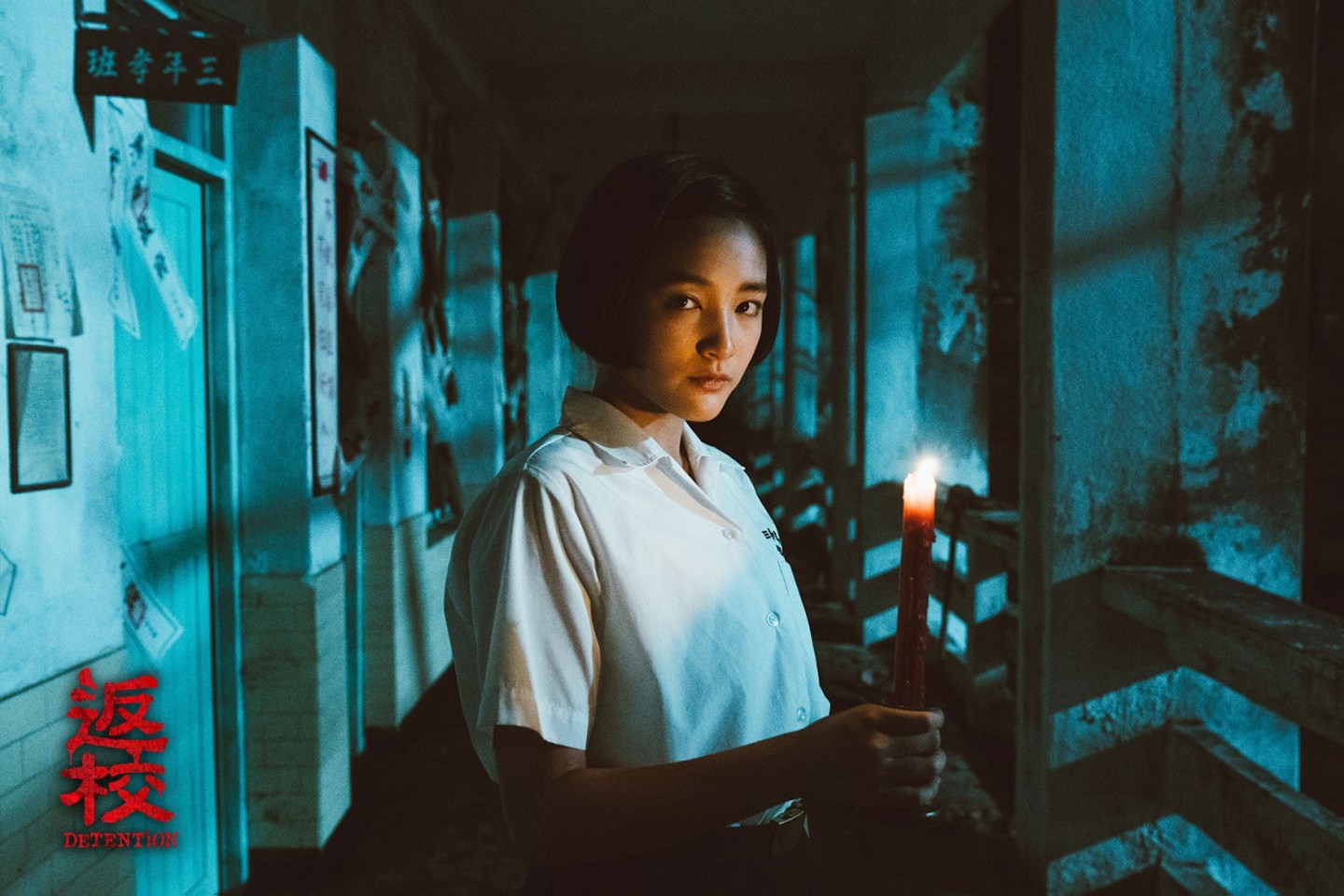 “Have you forgotten or are you scared of remembering?” a mysterious supernatural force seems to ask the heroine of John Hsu’s ironically named Detention (返校, Fǎn Xiào). In fact, the Chinese title means something close to “back to school”, hinting at its central message which uses the, it argues forgotten, tyranny of the “White Terror” to remind us that freedom is hard to win but harder still to keep. An unfortunately timely message given the assaults on democracy across the world but even more so given the recent protests in Hong Kong which have found support in Taiwan as it too looks back on its complicated history.

Based on a popular survival horror video game, Detention’s first hero is idealistic student Wei Zhong-ting (Tseng Ching-hua) who we quickly learn was picked up and tortured by the military police for reading books banned by the regime as part of an underground club run by two of his teachers – mild-mannered artist Zhang (Fu Meng-po) and stern musician Yin (Cecilia Choi Sze-wan). Set in 1962, the film finds itself at the height of the “White Terror”, a period of martial law which lasted for 38 years, during which any resistance real or perceived towards Chiang Kai-shek’s Kuomintang government was brutally suppressed with thousands tortured, imprisoned, or killed by the regime.

Wei finds himself in a lucid nightmare, trapped in his school building which has become derelict and seemingly abandoned while cut off by a raging flood. Gradually he starts to piece together memories of what must have happened, realising that his fellow club members seem to be absent and something must have happened with the military police. While in the school he runs into a fellow classmate, Fang Ray-shin (Gingle Wang Ching), though she doesn’t quite seem to remember him. Having apparently fallen asleep and woken up in this nightmare world, Fang seems even less clear about what’s going on than Wei but desperately wants to find their teacher, Zhang, with whom, we learn, she has fallen in love.

Plagued by horrifying visions that maybe repressed memories or simple nightmares, the pair are chased by giant monsters dressed in KMT uniforms standing in for the terror of living under an authoritarian regime. Only, these particular nightmare soldiers are literally “faceless” in that their hollowed out skulls, which themselves sit on fetid, rotting corpses, are filled only by a mirror making plain that the faces of the “faceless” regime are our own. Fang and Wei become convinced that someone has betrayed them by giving one of the illicit books to arch militarist teacher Inspector Bai, but they can’t be sure who it was, finally doubting even themselves in their inability to remember the exact circumstances which brought them here.

Flashing back to the “real” world, we discover that one sort of oppression cannot help but lead to others. Fang’s father is a respected soldier and supporter of the ruling regime, but he’s also abusive towards his wife, enforcing a rule of fear and violence even within his own home. Her mother has taken to religion in order resist him, regretting her marriage and furiously praying that he will soon be “gone for good”. “Gone for good” becomes a kind of mantra for others straining to free themselves from obstacles to their desires. Fang learns all the wrong lessons from her parents, allowing herself to be corrupted by their twin failures – her father’s in being a willing participant in the oppression of others, and her mother’s in subverting the world in which she lives in an attempt to free herself from violence.

Yet, as Zhang later tells her, no one is really at fault because they are all victims of the oppressive rule of the KMT. The ruined schoolhouse becomes a kind of repository for the orphaned memories of a forgotten past. You can tear it down and build a fancy apartment complex over the top, but the ghost of authoritarianism is always lurking on the horizon, and capitalist success will not safeguard your freedom. Those left behind have to tell the story so  this never happens again because those who fail to learn from history are doomed to repeat it. Zhang imagined himself a narcissus, living in his own world without caring what other people thought and claiming that the solidarity of silent understanding is the best cure for loneliness, but he lived in times in which he had no freedom in which to live, sacrificing his own future to become the selfless roots of emancipation blooming only for those who will come later.

Detention screens in Amsterdam on March 5/7 as part of this year’s CinemAsia Film Festival. It will also screen in Chicago on March 26th as part of the 10th Season of Asian Pop-Up Cinema.