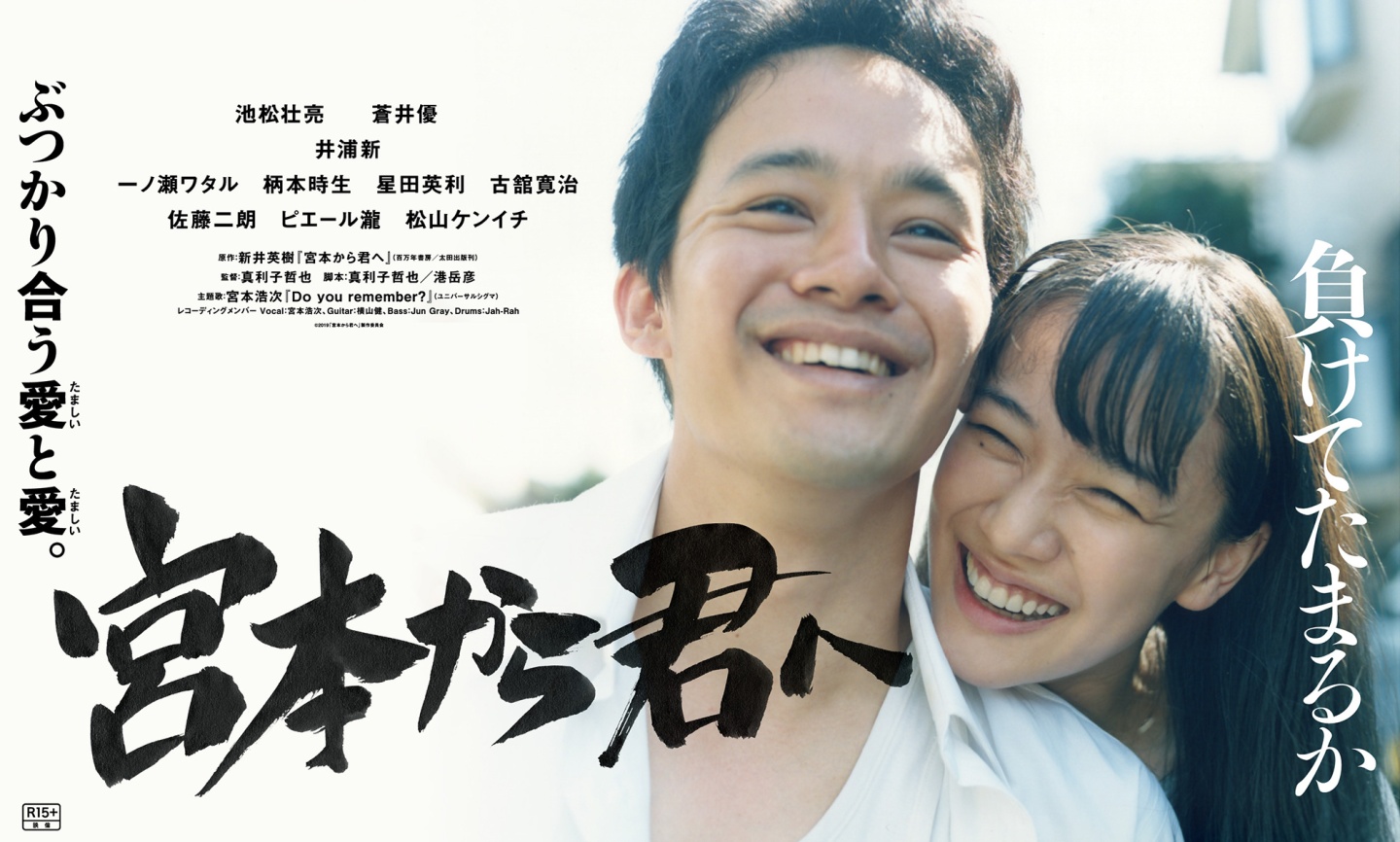 Three years after Destruction Babies, Tetsuya Mariko returns with another ultra-violent though strangely humorous masculinity drama as a mild-mannered salaryman embarks on a quest to win the heart of his one true love by proving himself a man even if aware that his efforts are entirely meaningless while he strikes out where it counts. Inspired by Hideki Arai’s manga, Mariko previously adapted Miyamoto (宮本から君へ, Miyamoto kara Kimi e) as a late night TV drama with the majority of the cast reprising their roles for the big screen feature.

As the film opens, the titular Miyamoto (Sosuke Ikematsu) is walking bruised and bloodied through a children’s park, staring at his unrecognisable face in the hazy mirror of a public bathroom. A regular salaryman, he’s later taken to task by his boss (Kanji Furutachi). After all, how does he expect people to do business with him when he’s lost all his front teeth and has his arm in a sling? His boss reminds him he’s about to be married and will soon be a father so perhaps a little more forward-thinking responsibility is in order. It seems that Miyamoto got into some kind of fight and improbably enough he won, the other guy apparently in hospital not to recover for months though thankfully he does not want to press charges. Nevertheless, Miyamoto seems strangely cheerful, happy in himself as he takes his bride to be, Yasuko (Yu Aoi), home to meet his parents who don’t disapprove but are extremely put out by his continued secrecy especially as Yasuko is already pregnant though something tells us there’s much more to this than your average shotgun wedding.

Skipping back between the present day of the happily settled couple and the various stages of their courtship we begin to see a pattern developing as the hapless young salaryman falls for the pretty office lady only to discover she was technically using him to break up with an obsessive ex struggling to accept that their relationship is over. Challenged by bohemian playboy Yuji (Arata Iura), Miyamoto instinctively barks out that Yasuko is a special woman and he will protect her at all costs though the jury’s out on how exactly he plans to do that. In any case, Yuji exits and even if unconvinced, Yasuko is taken in by the idea of finding a protector. But Miyamoto is less than true to his word. When it really counts, he lets her down, passed out drunk as she’s assaulted by a friend from his rugby team (Wataru Ichinose). What ensues is partly, in his mind, a means of making amends to her by getting his revenge and a quest to reclaim his self-respect by asserting his masculinity in besting his girlfriend’s rapist in a fight. “It was me he insulted” Miyamoto somewhat problematically insists, rage shovelling rice into his mouth directly from the cooker while Yasuko can barely contain her resentment and exasperation with his continued failure to follow through while painting himself as the victim in her rape.

Consumed by toxic masculinity, Miyamoto does indeed frame everything through the prism of his fracturing manhood, never jealous or abusive but comparing himself unfavourably to the other men in Yasuko’s life and convincing himself the way to beat them all is by proving himself the most manly through the medium of pugilism. Meanwhile, he emotionally neglects the woman he claims to love and promised to protect, temporarily distancing himself from her while he embarks on his quest, leaving her entirely alone to deal with her trauma. Yasuko makes it clear that she doesn’t care about his pointless and idiotic need to validate himself through male violence, but he does it anyway and then expects her to be impressed (which she isn’t, really). In any case he freely admits he did it all for himself, literally shredding his rival’s manhood in order to retake his own in addition to gaining an extremely ironic form of revenge.

Absurd and ridiculous as it is, Miyamoto’s quest does at least allow him to gain the self-confidence which will eventually allow him to patch things up with Yasuko, ironically by affirming that he no longer sees the need to look for approval and will protect her and their new family forevermore. A dark satire of fragile masculinity filled with cartoonish yet surprisingly graphic violence, Mariko’s third feature nevertheless retreats from the pure nihilism of Destruction Babies towards a more positive if perhaps equally uncomfortable resolution as the no longer quite so insecure Miyamoto prepares to enter a new phase of his life as a paternal figure and protector of a family.

Miyamoto streams in the US via the Smart Cinema app until Sept.12 as part of this year’s New York Asian Film Festival.