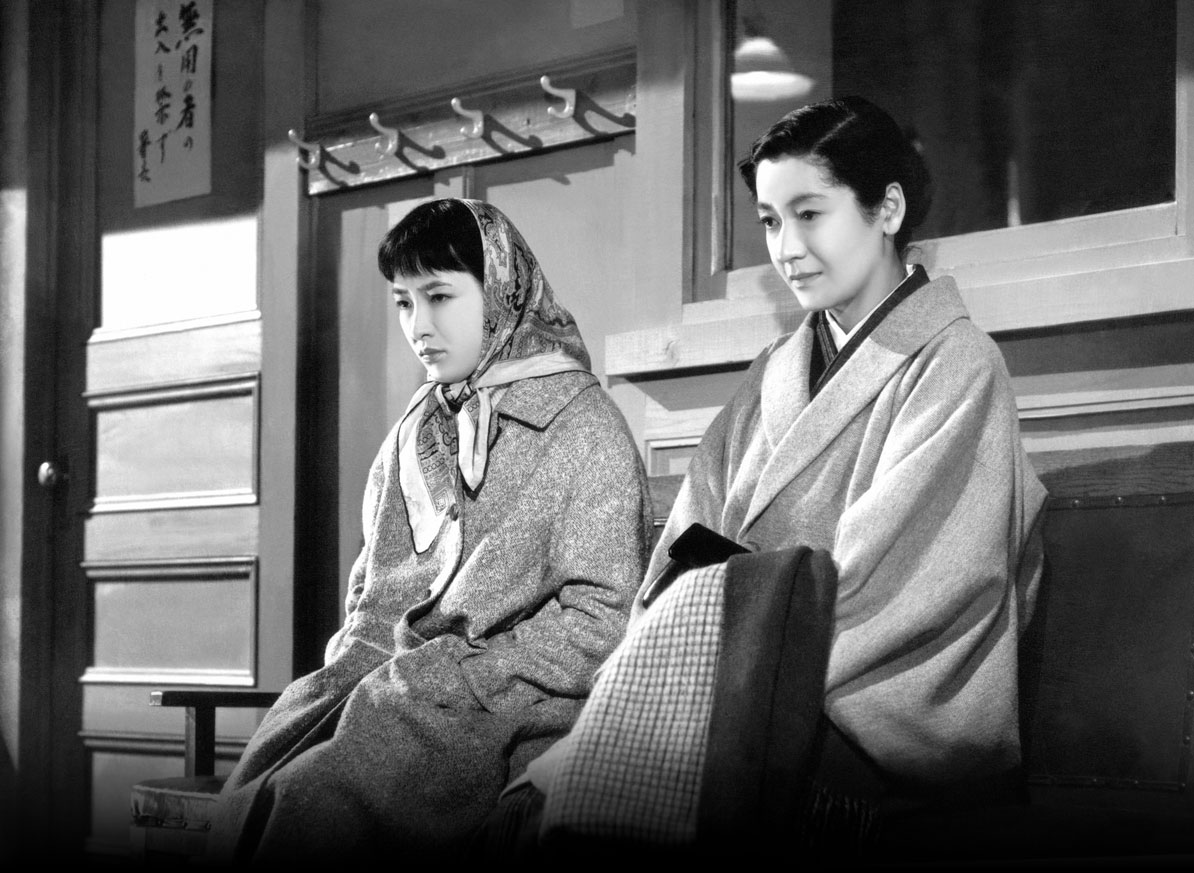 Closely associated with the family drama, Yasujiro Ozu is perhaps the most socially conservative of golden age directors. Unlike Naruse or Mizoguchi, he cheerfully reinforces patriarchal social norms and foregrounds the paternal experience while upholding the primacy of the traditional family in a rapidly modernising society. In his later career he’d come to sympathise more strongly with the young, but 1957’s Tokyo Twilight (東京暮色, Tokyo Boshoku), perhaps his bleakest take on familial failure, is essentially a treatise on the legacy of corrupted motherhood and rebuke to growing post-war freedom in which a young woman is made to feel that her future is impossible because of maternal betrayal while her sister is forced back into an unhappy marriage to an abusive husband in order to avoid the same fate befalling her own daughter.

Unlike most Ozu families, the Sugiyamas do not seem to be particularly happy in each other’s company, living in superficial politeness rather than true intimacy. This may partly be because the sisters had a brother who passed away young in a mountain climbing accident, but it also seems that Mr. Sugiyama (Chishu Ryu), though kind and polite, is a typically authoritarian, distant father. Oldest daughter Takako (Setsuko Hara) has returned home declaring herself unable to go on living with her professor husband Numata (Kinzo Shin) who, she says, has become increasingly erratic, taking out his petty professional disappointment on their small daughter Michiko whom he seems to resent. Younger sister Akiko (Ineko Arima) meanwhile is sullen and introverted. Unmarried, she lives at home and is studying to become a stenographer.

As we later discover, the girls’ mother Kikuko (Isuzu Yamada) left the family during the war after falling in love with the junior officer Mr. Sugiyama enlisted to look in on the family while he was away in Seoul. Akiko was only three when their mother left and barely remembers her. Takako attributes her wayward behaviour to “loneliness”, that she has been forever corrupted through never knowing a mother’s love. Mr. Sugiyama admits he tried his best, but both agree that children need two parents and no matter how much he wants to a father cannot make up a mother’s share.

This atmosphere of alienation is perhaps why Akiko feels as if she has no one to turn to in her own moment of maternal crisis. She has become pregnant by her college student boyfriend who has been avoiding her and even has the audacity to ask if the baby’s his when Akiko finally manages to pin him down. Trying to borrow money for an abortion, Akiko visits her aunt who declines to give it to her without knowing why, eventually turning to a family friend who apparently provides no questions asked. The woman at the clinic assumes she is a bar girl, as does a policeman who eventually “arrests” her for loitering in a sleazy cafe where her boyfriend has obviously stood her up which is quite openly being used as a place for men to pick up call girls. All of this contributes to Akiko’s increasing sense of shame and worthlessness. She sees herself as a fallen woman, convinced that she is all her mother’s child contaminated by her “bad blood” which makes a conventionally successful life as an ordinary wife and mother an impossibility.

Akiko’s aunt wants to set her up with arranged marriage matches, but Akiko declares she has no intention of marrying or having children. Without knowing anything of Akiko’s circumstances, Takako assumes this is because of her obviously unhappy marriage, trying to convince her sister that there are plenty of happy couples she is merely unlucky. Mr. Sugiyama attempts to talk to his son-in-law but finds him strange and indifferent, offering treatises on familial love while implying that he has little of it. He regrets pressuring Takako to marry him when he knew that she preferred someone else while Takako is once again haunted by the spectre of corrupted maternity in her mother’s decision to leave the family for emotional fulfilment and is fearful of making the same mistake creating another troubled daughter just like Akiko in denying her a father’s love (which seems a moot point given that Numata does not care for the child).

Neither woman is able to escape paying for their mother’s transgression. Akiko is punished firstly for embracing her sexuality and secondly for the rejection of motherhood in choosing to have an abortion. Alone and humiliated by her unreliable boyfriend, she is denied the opportunity to start over, while Takako meditates on female failure and believes that her only option is to live in misery with a cruel and narcissistic husband because that is the “proper” thing to do and the only way to bring her daughter up “right”. The absent mother, meanwhile, is denied reconciliation and left only with the painful separation from her daughter who finally rejects her in order to reclaim the image of the good wife and mother by returning to her unhappy home. Bleak as it is, all of this is presented as a kind of happy ending in that it restores the idea of the traditional family, increasingly threatened by post-war modernity, to its original primacy. We leave with Mr. Sugiyama rehiring his maid and heading cheerfully back to the male world of work, making the fresh start that his daughters have been so cruelly denied.

Currently streaming in the UK via BFI Player as part of Japan 2020. Also available to stream in the US via Criterion Channel.