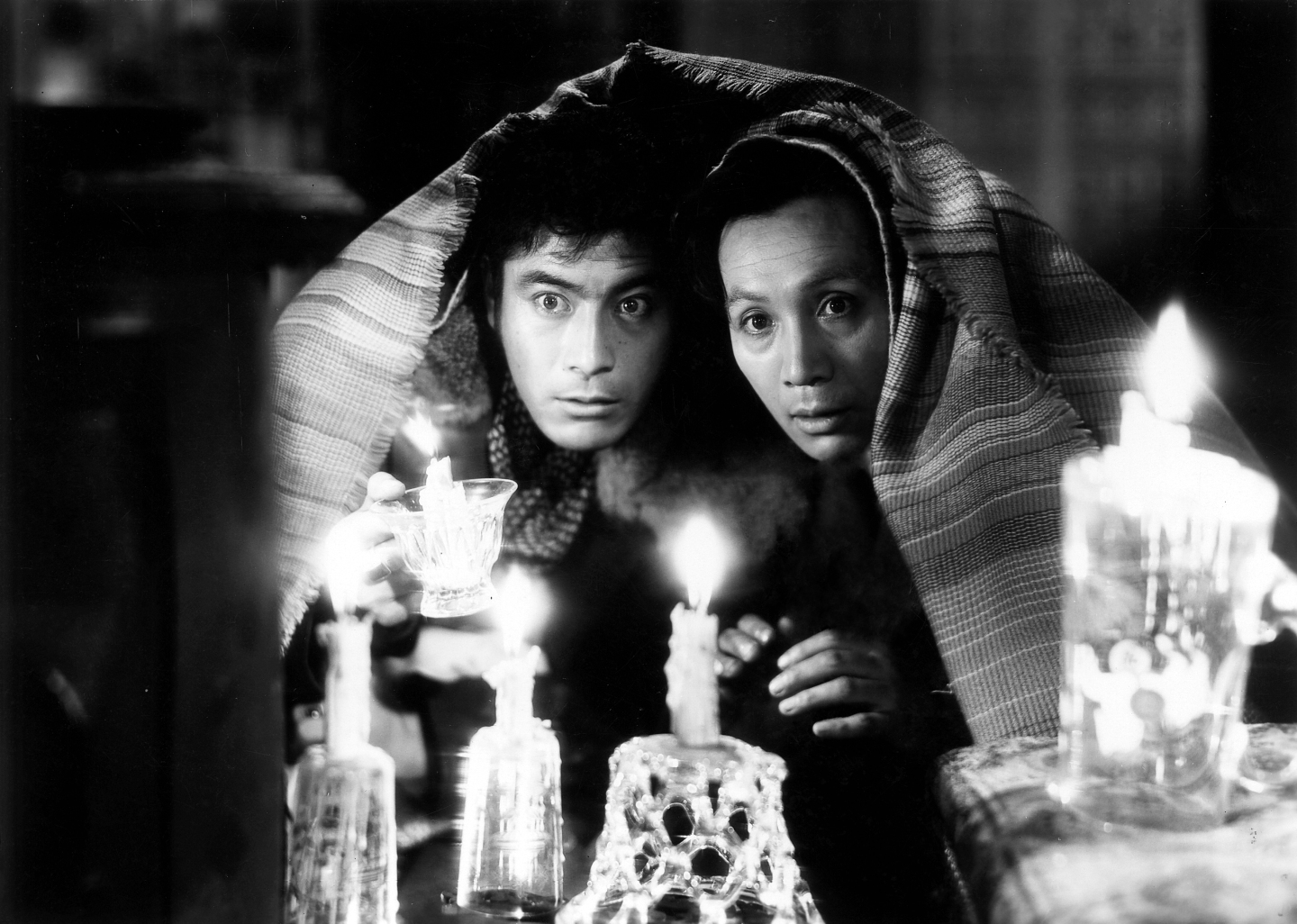 “He was too good for this world” a matriarch finally concedes of the pure soul at the centre of Akira Kurosawa’s The Idiot (白痴, Hakuchi), though like most she had found his goodness unnerving. Adapted from the Dostoyevsky novel, Kurosawa’s poetic morality play is like much of his contemporary work a meditation on the post-war future but perhaps also an admission that this “faithless world” isn’t meant for pure souls and that goodness too can be destructive in its incompatibility with a world ruled by cruelty and selfishness.

Relocated to a wintery Hokkaido, the film opens with former soldier Kameda (Masayuki Mori) travelling north to stay with a relative after a spell in a psychiatric hospital in Okinawa. Having been sentenced to death for war crimes in what he claims was a case of mistaken identity and then unexpectedly reprieved, Kameda suffered a nervous breakdown but also describes himself as having been reborn, as if everything that had happened to him up to that point had happened to someone else. Ever since then he’s been a pure soul, selfless and ethereal but also with, as someone later puts it, an eerie power to see into people’s hearts that leaves some feeling shamed or uncomfortable in the stinging light of his goodness.

In the outdated language of the time, he is called an “idiot” because of his epilepsy which has he says caused him epileptic dementia. In the title cards that open the film, it is said that goodness is often conflated with idiocy as if to be good is only to be naive for sophistication necessarily favours calculation over feeling. He is an outcast firstly because of the stigma surrounding his condition and secondly because of the way his goodness reflects on others, leaving them feeling exposed or perhaps judged and found wanting.

He finds his mirror in a young woman, Taeko (Setsuko Hara), who is loved by a man he met on the train, Akama (Toshiro Mifune), but is herself an outcast because she has been the mistress of a wealthy man, Tohata (Eijiro Yanagi), since she was only 14 years old. On seeing a photograph of her in a shop window near the station he remarks that she seems very unhappy, later explaining that in her eyes he saw only long years of lonely suffering that reminded him of the eyes of a young soldier executed by firing squad who looked back at him with eyes filled with reproach that he must be sacrificed for the folly of the war. But whereas Kameda’s awakening as a pure soul has opened him up to the world, Taeko’s internalised shame has made her cold and indifferent. Kameda’s recognition of her as another pure soul grants her the courage to escape one kind of suffering in abandoning the wealthy man who has ruined her life, but only provokes further destruction in her conviction that Kameda is the one man she can never love for she will only ruin him.

Kameda, meanwhile, falls in love with the daughter of his relative, Ayako (Yoshiko Kuga), who is proud and largely unable to express her feelings honestly often saying the direct opposite of what she actually means. She too has her idea of goodness, breaking with her childhood sweetheart Kayama (Minoru Chiaki) when he is tempted by an offer from Tohata to enter into a sham marriage with Taeko for appearance’s sake in return for a large sum of money and guaranteed social advancement. Though Ayako originally rejects Kameda because of the shame and humiliation she would feel married to a man with a disability, she nevertheless fails in love with him but is unable to accept the equality of his love in his inability to abandon Taeko to whom he has come to represent a kind of salvation.

Ayako later comes to believe that it was she who was truly the “idiot” in her petty jealousy lamenting that “if only we could all love without hatred” as Kameda had done though it was in the end his selfless love that sealed his fate, while for Akama it was perhaps the opposite in realising that he would never possess Taeko’s heart and that the only reason she returned to him was because she thought him to be a man of so little importance that ruining him was of no consequence and ruin him she did in the madness of his love. Guileless, Kameda is also a pauper cheated out of his inheritance by a relative and then again exploited by a duplicitous businessman, his poverty another proof of his goodness while others squabble over money. Having escaped an authoritarian father and come in to his inheritance, Akama wagers his fortune trying to buy Taeko from Tohata by gazumping Kayama who later redeems himself by letting the money burn but never really escapes the stain of his temptation.

Kurosawa frames the tale as high gothic, filled with eerie winds and mist and fire in the midst of snow. The stove of Akama’s otherwise dark and gloomy mansion seems to flare with the intensity of confrontation as the passions of these four tortured souls rise and fall while each seeking a kind of salvation which necessarily cannot satisfy all. Originally intended to run in two parts over 265 minutes, the film was famously too big for producers at Shochiku for whom Kurosawa was working outside of his regular studio Toho. They cut 100 minutes to suit their exhibition needs, excising most of the prologue and inserting a number of clumsily placed intertitles absent from the rest of the film while undercutting the sense of mounting dread in the tragic backstories of each of these doomed romantics. But even in this compromised version, Kurosawa captures something of the gothic fatalism that surrounds Kameda, an innocent lamb in a world of wolves as Akama describes him, whose boundless, selfless love has no place in this faithless world.

The Idiot screens at the BFI Southbank, London on 13th & 21st January 2023 as part of the Kurosawa season.