Finding the sinister in the commonplace is the key to creating a chilling horror experience, but “finding” it is the key. Attempting to graft something untoward onto a place it can’t take hold is more likely to raise eyebrows than hair or goosebumps. The creators of Korean horror exercise Manhole (맨홀) have decided to make those ubiquitous round discs the subject of their enquiries. They are kind of worrying really aren’t they? Where do they go, what are they for? Only the municipal authorities really know. In this case they go to the lair of a weird serial killer who lives in the shadows and occasionally pulls in pretty girls from above like one of those itazura bank cats after your loose change.

Of course, it’s sort of our first victim’s fault because she’s dared to go out late at night on her own and committed the cardinal sin of shouting at her over protective father on the phone shortly before realising she’s wandered into a horror movie by mistake. The lights start flickering, everything goes wavy and then you’re being pulled down a manhole. Not cool.

Anyway, the real story is about two sisters. Yeon-seo (Jung Yu-Mi) is now the sole guardian of Soo-jeong (Kim Sae-Ron) following the death of their parents and also seems to be harbouring some kind of guilt over an accident that left Soo-jeong permanently deaf. Perhaps a little over protective as a consequence, Yeon-seo instructs Soo-jeong to stay in their apartment and wait for her to get back. Soo-jeong, however, is old enough to push the boundaries and ventures out alone to meet her sister on her way home with an umbrella. Unfortunately, she catches sight of the killer along the way and is soon trapped in the sewer like everyone else, apparently. Yeon-soo tries to call the police but they aren’t interested so she has little choice but to track her sister’s phone and journey underground herself. She’s joined (well, they’re there at the same time) by the father of the first victim (Choi Duk-Moon) who happens to be a former policeman, now in possession of a gun stolen from a friend also set to make a fateful descent at a later point.

Manhole is a very confused film. Unable to decide who its protagonist(s) is (are), it meanders freely between its disparate plot strands without ever managing to build coherent connections between them. Though the sisters are posited as the main element of the story, they take quite a long time to arrive and are then frequently sidelined in favour of other ongoing developments. Their story is undoubtedly the most interesting as it presents an unusual plot device in which they remain unable to communicate verbally during their attempts to escape from the sewers and it’s nice to see sign language used so ordinarily in a genre film, yet even their meagre backstory is painted in broad strokes and through flashbacks once again making it difficult to fully connect with them as they battle the threat in the shadows.

The role of the killer, Soo-chul (Jung Kyoung-Ho), is also a difficult one as he is neither protagonist nor generic threat but given a small amount of flashback backstory delivered in monologue to his victims which only serves to make him a frustrating presence. Manhole seems as if it has a point to make about families in that Soo-chul is a damaged child of a broken home, both trying to avenge himself and regain what he’s lost by, in a sense, “recreating” a family through his kidnappings. Frequent glances towards the prominently displayed portrait of the ideal family contrast with the other relationships in the film – Jong-ho and his hunt for his missing daughter, and the bond between the two sisters. Both of these family units are also missing elements – the sisters who’ve lost their parents and Jong-ho as a lone father. Neither of the parental figures in the film is fully able to protect their charges despite appearing controlling and over protective prior to the incident though no particular reason seems to be offered for this other than praising parental sacrifice in allowing both to fight all out to protect those closest to them.

What Manhole tries to be is a chase film, confining itself to the sewer environment as its crazed killer crawls around it like the literal beast in the shadows, cocooning victims in clingfilm and wearing bug-like bright red night vision goggles. Though exciting enough the frequent cutaways and over reliance on shaky cam disrupt the claustrophobic atmosphere as do the stereotypical jump scares and framing which feel as predictable as the final sequence of a video game in which the idea is to dodge the falling axes. Muddled and inexpertly photographed, Manhole is a disappointing genre exercise which even the generally strong performances of its cast can’t mask. Still, hardcore genre fans may find more to admire in the gore stained darkness of the oddly accessible sewer network and its lizard-like psycho killer. 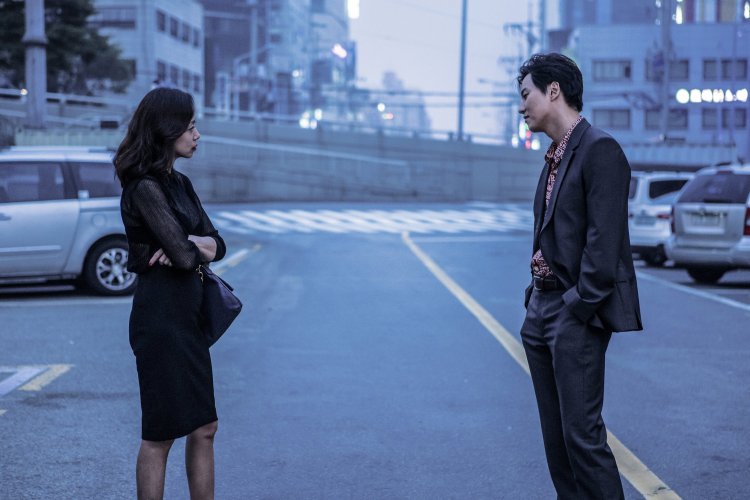 Review of Oh Seung-uk’s The Shameless (무뢰한, Moorwehan) up at UK Anime Network. I read some lukewarm reviews but I actually really liked this one (though I’m a sucker for B-movie noirs and my tolerance for melodrama is sky high)!

Director Oh Seung-uk maybe best known as the screenwriter behind such varied and well respected efforts as Green Fish (directed by Korean auteur Lee Chang-dong), Christmas in August and H, but way back in 2001 he made a minor splash at Cannes with his existential gangster piece, Kilimanjaro. The Shameless sees him one again turn to the shady world of underground crime though this time what he’s interested in is a romantic melodrama laced with deadly film noir morality.

Recently divorced police detective Jung Jae-gon has been handed what seems like a fairly straightforward murder. They already know who the killer is and the motive behind the crime, all that remains is to track the guy down. Luckily they also know that Park, a gangland thug, has a regular girlfriend, Kim Hye-kyung, who works at a seedy downtown bar. Through tailing her they’ll find their man. This is where things get sticky. Said girlfriend is the former lover of the head of another crime syndicate who’d now like to use Park’s current predicament to exact some revenge on the drifter who’s stolen his girl. Roping in a disgraced ex-cop, the gang offer Jae-gon a significant amount of money to cripple Park during his arrest and take him out of the picture for good. Jae-gon is conflicted. The way he sees it, the day you can’t tell which side you’re really on is the day you need to hand back your badge, but Jae-gon’s in need of money, this guy used to be his friend and then, there’s the girl…

Right here you have all the essential elements of your classic film noir. Basically good, if imperfect, detective receives an offer he can’t refuse and ultimately accepts it against his better judgement in part because of a femme fatale that he just can’t get out of his mind even if the more rational part of his brain knows this is something that is never going to happen. Before you know it, Jae-gon has researched Park’s history and adopted the persona of a former cellmate before taking an undercover job at Hye-kyung’s bar and attempting to become close to her in the hope that she’ll eventually lead them to Park’s whereabouts. Of course, he starts falling for her too and though she remains doggedly committed to Park, something in her begins to warm to him in return. This is a situation which can never end well and its classic B-movie style inevitability only adds to the eventual pathos of its deliberately downbeat ending.

The film is called The Shameless for a reason – nobody looks good in this shady world of corrupt cops and vicious gangsters who will stop at nothing to get what they want. The fact that you can barely tell who is on which side is a good indicator of the levels to which this world of chaos has become warped. Even the police are literally “shameless” stooping so far as to indulge in an interrogation technique which is, in fact, a sexual assault. At least the gangsters are abiding by their own rules.

The picture has a slick, stylish aesthetic which is perfectly in keeping with its morally grey, film noir inspired mood. It’s full of existential angst and the ennui of modern, aimless life. As usual for this kind of film, Hye-kyung repeatedly gets the short end of the stick – used and abused by faithless men, so massively in debt it’s almost impossible she’ll be able to extricate herself from the seedy world of hostess bars and petty gangsters before its too late. She’s only one victim of the pervasive sexism that defines this harsh world. Clinging desperately to Park, Hye-kyung’s one and only escape route is to hope one of these feckless men is the one who can take her away from this place.

Needless to say this isn’t one of those films where everyone gets what they want and walks off into the sunset of eternal happiness, but perhaps it isn’t as apocalyptic as the original premise might promise. That is actually something of a problem as the slightly softer ending undercuts the film’s emotional resonance and ultimately leaves one feeling a little less than satisfied. Still, even if The Shameless fails to hit its mark at the very end, Oh has still crafted a stylish and beautifully photographed neo-noir romance that stays true to its classic B-movie roots whilst also embracing the best of the modern crime movie.