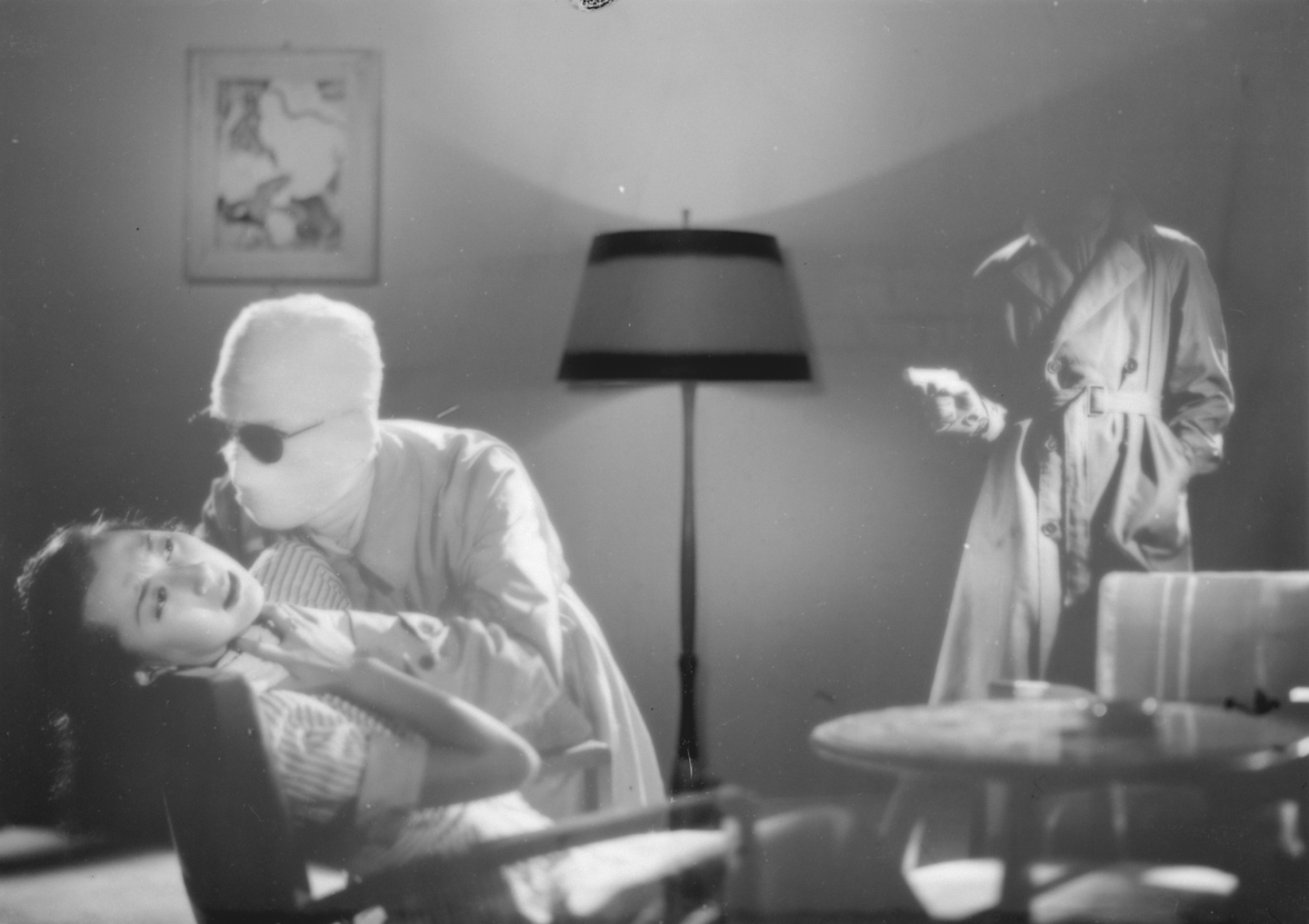 Once again the action centres around an esteemed chemist, Professor Nakazato, who has been working on a serum to render living things invisible. So far he has a sample which works on animals but is reluctant to move on to human testing as A) he hasn’t found a way to reverse the procedure, and B) there are some unpleasant side effects in which the subject becomes increasingly violent and irrational. The professor currently has two top students who are helping him towards his goal and, inconveniently, both have taken a shine to his daughter, Machiko. Half joking, the professor remarks that whoever can solve the problem first will win his daughter’s hand.

A business associate of the professor, Kawabe, is also interested in Machiko and also in the rights to the professor’s important new discovery. The professor, however, is a responsible man and refuses to sell it in case it falls into the wrong hands. Shortly after the professor is kidnapped by a gang of armed thugs who plan to use the serum to steal a set of diamonds known as The Tears of Amour.

There’s plenty of intrigue with various twists and turns to the original story which keep the viewer on their toes as they try to figure out who exactly is the invisible man and what he’s really after. Actually, the solution is sort of obvious and heavily signposted but that doesn’t make it any less fun. Kawabe is a moustache twirling villain from the get go and it’s obvious he has various things going on in the background but there’s more to the story than a greedy business man trying to manipulate everyone around him for his own gains. There’s also an interesting subplot in which the younger sister of one of the scientists is a top actress at the Takarazuka Review and turns out to have a connection to the Tears of Amour.

All of the classic B-movie hallmarks are here from the slightly ridiculous sci-fi jargon to the classic women in peril shenanigans as the serum starts to take hold and the Invisible Man becomes increasingly paranoid. There’s nothing good or bad but thinking makes it so – so it would be for science as far as the film is concerned. According to the message at the film’s beginning and end, there is no scientific discovery which is innately “evil” but each is apt to be misused. It’s not difficult to see why this would be a popular, even essential, message in the Japan of 1949 and indeed it recurs in many films of this type including, of course, the original Godzilla. The professor takes responsibility for having invented something which, although not created with evil intent, has wrought such destruction on society but finds himself with nothing left to do other than apologise.

Director Nobuo Adachi uses a lot of classic silent cinema techniques such as dissolves and montages with a fair amount of handheld camera and some location shooting (though the majority of the film is studio bound). The special effects were supervised by Eiji Tsuburaya who would later become the founding father of tokusatsu and co-creator of the Godzilla franchise and are top notch for the time period. An enjoyably silly B-movie, The Invisible Man appears is a well crafted addition to the Invisible Man corpus and a fantastic example of Daiei’s post-war genre output.

Original trailer (English subtitles) – I wish all trailers were this much fun!