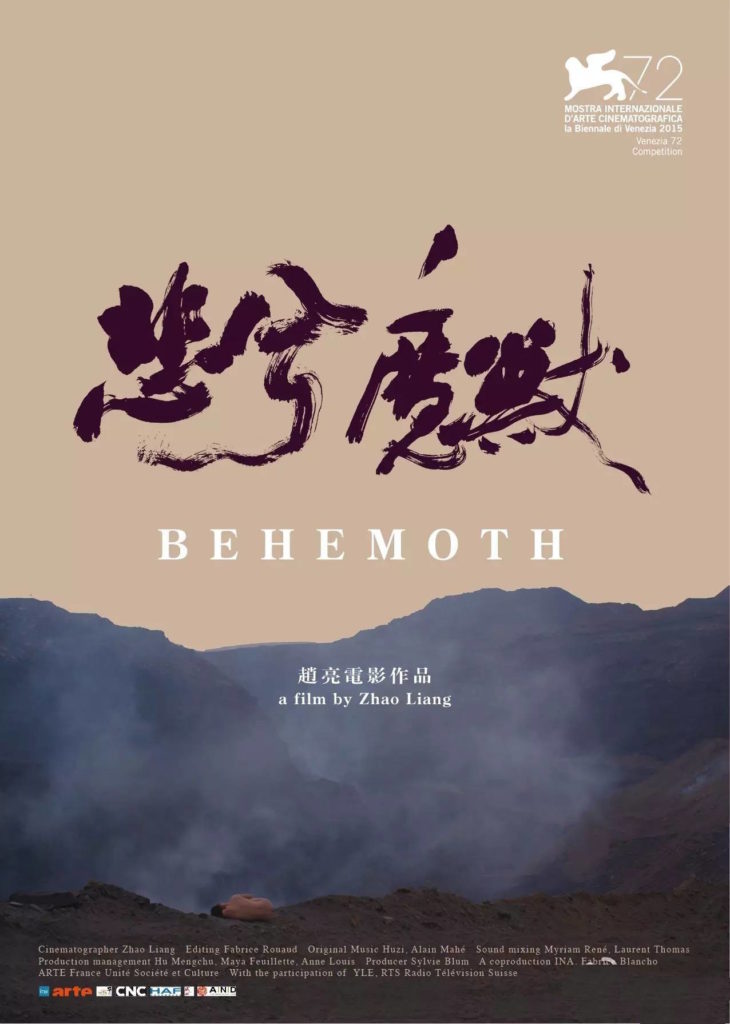 Evil, so a wise man said, begins when you start treating people as things. Fritz Lang’s Metropolis showed us a city that literally was its people – nothing but a vast yet perfectly functional machine with the workers little more than cogs to be replaced and discarded once worn out. Zhao’s Behemoth (悲兮魔兽, Bēixī Móshòu) is no fantasy but a very real journey through our own world and so we follow our narrator, a poetic, naked stand in for Dante’s Virgil, through hell and purgatory on a path to paradise only to find ourselves staring into a void filled with our unfulfilled desires and forlorn hopes.

On the fifth day God created Behemoth, and the mountain brings him forth food. Where once there was a paradise of verdant green fields and pastoral hills, now there are only quarries and the sounds of men at toil have replaced those of birds and other kinds of beasts. Our journey into hell takes us into a coal mine filled with noise and fires as the mountain is asset stripped right before our very eyes. We are witnessing a murder – the brutal slaughter of natural beauty for human gain, perpetrated by exploited workers who live in penury while their bosses rake off the profits from a safe distance.

Zhao’s workers labour at all hours under the searing heat of a midday sun or the bright glow of moonlight. He lingers on their faces, some old before their time but each tired, wrinkled. The workers are not provided with much in terms of infrastructure or facilities. They have no showers as Western coal miners might, they return home to scrape themselves with towels in an attempt to remove the stain of coal dust from their skin. Coal dust is a penetrative parasite, it sinks deep, falling into the creases each worker has developed through their strenuous efforts to earn the money to survive.

The dust does not stop at the skin. It runs deeper still, into the lungs where it stifles breath even once the unbreathable air of the furnace has been left behind. In what amounts to the naked dreamer’s path through purgatory, we see former workers lying listlessly on hospital beds as the black fluid is drained from their lungs. They cough, wheeze and struggle to breathe but they receive scant care or regard for their years or backbreaking toil. Some of them have formed a pressure group, hoping to get the government involved in their struggle to improve pay and conditions in the powerhouse of the nation but, as is expected, they receive little attention – after all, there are plenty more workers out there and leverage is small when jobs are in demand.

So what of Paradise? Paradise is empty, all the righteous are trapped in hell. Vast cities of high rise buildings lie vacant – a symptom of economic hubris as supply outstrips demand by an inconceivable margin. All this progress, and no one left to enjoy it. At the beginning our naked dreamer evokes Dante to tell us that there is no greater pain than desire without hope. It is unclear if Zhao’s Inner Mongolian workers would prefer this kind of paradise to their green rolling hills, but the decision has been made for them and even so, this is a workers’ paradise that is intended for a different kind of worker, there is no space here for any of Zhao’s coal smeared faces.

Our naked dreamer was guided here by a fellow plains dweller who does not know how to write poetry, but the eloquence of his heart is equal to Dante himself. The guide claims to show us a picture of the dead but the weight he carries on his back is a mirror – it shows us death wearing our own faces. Zhao shows us who we are – the faceless monster, Behemoth, is us or a manifestation of our relentless greed. We were born in paradise, and created ourselves a hell because we wanted more than the Earth could give us. This is our never-ending tragedy, overwhelmed by desire we destroy each other in an endless quest for an unattainable paradise that only exists in dreams.

Zhao’s background in photography comes to the fore as he captures these hellish scenes with an odd kind of beauty, mixing the bucolic with the brutal. Cattle grazes on the distant fields as fires burn in the background, and a baby boy plays innocently by madly digging at the ground as if mimicking the behaviour he sees all around him. At one moment the entire screen floods with red as the hellish glow of the smelting process momentarily blinds us, as does a dust cloud of white later on. For the most part, Zhao is content to show us the faces of these men and women, weathered by years of backbreaking labour yet he also tells us that he sees past their fatigue and their resignation to the people they once were that this environment has also destroyed. This is no social realist propaganda film, Zhao respects the sacrifice of these hard working people but it’s as far from glorification as it’s possible to be.

It’s tempting to say this is a China specific issue, brought about by the country’s unique political situation and rapid industrialisation but Zhao’s canvas is wider. This is a human problem that is not bound by national borders or cultural norms. We each live complicit with this system, so desperate to keep the lights on that we’ve become afraid to ask how it’s done. We can continue feed the monster that will one day devour us, or we can try to starve it out but that would require us to acknowledge the greed and selfishness that underline human nature. History is not on our side.