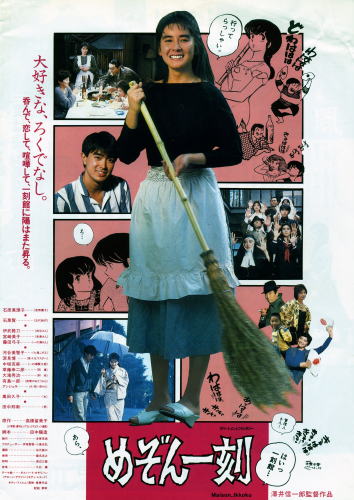 If you’ve always fancied a stay at that inn the Katakuris run but aren’t really into zombies and murder etc, you could think about spending some time at Maison Ikkoku (めぞん一刻). Based on the classic 1980s manga by Rumiko Takahashi, the 1986 live action adaptation is every bit as zany as you’d hope. Eccentric tenants, women pulled from ponds, bank robbers, and an all star dog. It’s a pretty full house, but if anything’s for certain it’s the more the merrier over at Maison Ikkoku.

Godai (Ken Ishiguro), a would-be student retaking his university entrance exams, has finally had enough and vowed to move out of Maison Ikkoku for good but just as he’s made his decision, an elegant woman arrives with a big white dog. The beautiful lady, Kyoko (Mariko Ishihara), is their new building manager. Godai falls instantly in love with her and decides to stay, but Kyoko has her own reasons for coming to Maison Ikkoku and isn’t quite ready to engage in a romance with a feckless student.

Kyoko also makes the mistake of reminding the collection of eccentric tenants that they’re behind on their rent. There are currently four residents occupying the apartment building including Godai. He’s joined by the mysterious Yotsuya (Masato Ibu) who seems to have several different jobs and speaks in an overly formal manner, Ichinose (Yumiko Fujita) – a gossipy middle aged housewife, and Akemi (Yoshiko Miyazaki) who works at a nearby bar and is almost always in her underwear. They don’t want to pay so they start coming up with plans to stop Kyoko coming after them for the money – the first one being to drug and assault her so she’ll be too embarrassed to talk to them again! Went dark quickly, didn’t it?

Despite the quirky goings on, the presence of death is constant. Kyoko is an extremely young widow sill mourning the death of her husband and has even named her dog after him. Shinichiro keeps making his ghostly presence known to her by ringing the nearby shrine bells or stealing her umbrella, making it impossible for Kyoko to move on. A non-resident but frequent visitor (played by Kunie Tanaka) recounts that his wife left him and took part in a double suicide with another man, whilst the gang also picks up another member in the form of a woman that Yotsuya claims to have fished out of the lake after she “got caught on his pole” and is now a little obsessed with him thinking that he’s the boyfriend she tried to commit suicide over.

If that all sounds a little heavy, Sawai makes sure to pile on the absurdism to keep things light and even includes a few visual gags such as a floating geisha doll during Yotsuya’s “I regret preventing a woman’s suicide because it turns out she’s quite annoying” speech. About half way through the film the entire gang suddenly decides they’re going to perform an “Ikkoku speciality” in celebration of Godai’s success which turns out to be a full scale song and dance number with everyone dressed in outfits that reflect their personality from Yotsuya in his temple singer garb, Ichinose in her wedding dress, Akemi in a nurses outfit, and Godai and Kyoto both in a school uniform, to the mysterious man dressed as a hardboiled detective the failed suicide woman for some reason dressed as a nun. Just when a big “The End” sign pops up we get yet another song accompanied by glow sticks waving in the background.

The main “drama” revolves around Godai’s attempts to pass his university entrance exams and win the heart of Kyoko though there are also various subplots concerning the odd rivalry between Yotsuya and the mysterious man over a bank robbery as well as their attempts to evade the police. Maison Ikkoku becomes a kind of sanctuary where those with wounded hearts can find a place to heal themselves. Occasionally bleak, such as in the frequent references to death and suicide, Maison Ikkoku is an absurd place filled with larger than life characters acting out their surreal existence in this shared paradise of a rundown boarding house in a quiet backwater. The film ends on another ironic note as the party goes on but the Gilbert O’Sullivan track Alone Again, Naturally plays over the end credits which is, of course, about the singer’s intention to commit suicide after being jilted at the altar. A strange if well crafted film, Maison Ikkoku is in someways ahead of its time in the quirky humour stakes but also makes use of a typically ‘80s kind of absurdism which fuses black humour with innocent, youthful charm.