Written by Hayley ScanlonPosted on July 23, 2017Leave a comment 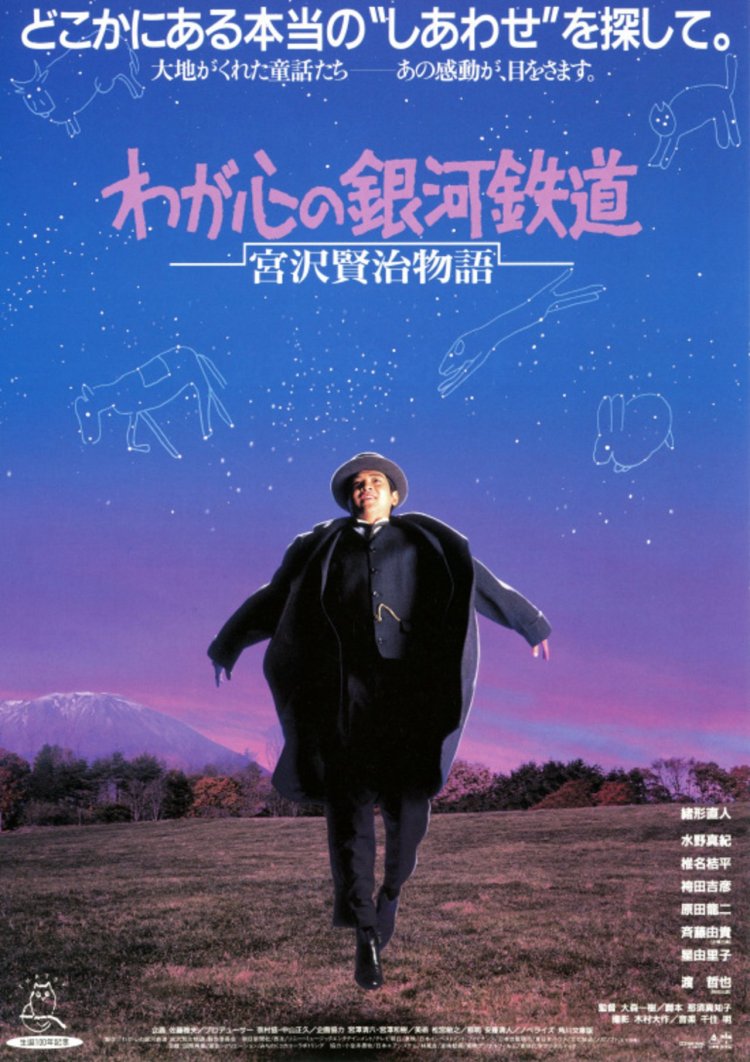 Kenji Miyazawa is one of the giants of modern Japanese literature. Studied in schools and beloved by children everywhere, Night on the Galactic Railroad has become a cultural touchstone but Miyazawa died from pneumonia at 37 years of age long before his work was widely appreciated. Night Train to the Stars (わが心の銀河鉄道 宮沢賢治物語, Waga Kokoro no Ginga Tetsudo: Miyazawa Kenji no Monogatari), commissioned to mark the centenary of Miyazawa’s birth, attempts to tell his story, set as it is against the backdrop of rising militarism.

An aimless if idealistic young man, Miyazawa (Naoto Ogata) is at once fiercely religious and interested in mildly left-wing, agrarian politics. Together with a close friend, Kanai, he dreams of building a village utopia in which a community of farmers works the land enjoying peace and prosperity free of the oppression of landlords. The eldest son of a money lender, Miyazawa does not approve of his father’s profession and attempts to show him up by interfering in his business but only succeeds in showing his own naivety and though he has an especially close relationship with his older sister Toshi (Maki Mizuno), Miyazawa longs for pastures new but never manages to stick at anything for very long. After failing to join a religious sect in Tokyo, he returns home to start an agrarian school which will teach ordinary famers’ sons the joys of the arts.

Miyazawa had seemingly always been a strange, ethereal presence – a drunken guest at his family home mocks the way he used to wander around town robotically banging his toy drum as a child, and it’s clear he doesn’t fit within any of the environments he attempts to carve out for himself save the solitary cabin where he later begins his personal agrarian experiment. As the eldest son of the family it would be expected that Miyazawa take over the family business but there just isn’t any way he could. Second son Seiroku (Ryuji Harada) later adopts the familial responsibilities, even if remaining committed to his brother’s legacy by collating and publishing his work following Miyazawa’s death.

Miyazawa’s strangeness extends to his diet – he’s a strict vegetarian thanks to his attachment to Nichizen Buddhism. Intense religiosity remains a central part of Miyazawa’s life but it’s often one that’s hard to integrate with his other relationships. Not content with leading by example, Miyazawa is continually trying to convert his reluctant friends and family to his own beliefs, refusing to take their polite refusals seriously. Though his father simply ignores Miyazawa’s pleas and accepts them as a part of his strangeness, other friends are not so tolerant. One even eventually decides to sever the friendship entirely, giving the young Miyazawa a painful station platform lecture on the true nature of friendship. Berating him for the fact his letters are essentially all about himself and his religious claptrap, his friend reminds him that true friendship is accepting someone for what they are, implying that he’s not a trophy to be won for the cause of Nichizen Buddhism and has his own beliefs and causes which are just as valid as Miyazawa’s.

Yet even if sometimes misguided, Miyazawa’s intensions are altruistic. His is a love of the world, of dreams, and nature and people too though something in him has never quite felt at home in conventional society. Miyazawa’s writing is more an artistic pursuit than an attempt at a literary occupation – his first published volume sold so badly he felt guilty enough to get himself in debt buying all his own books so that the publishing company wouldn’t be out of pocket after supporting him. The son of wealthy family, Miyazawa could perhaps afford to indulge his eccentric ideas but the same is not true for all as he finds out when visiting the home of a pupil who is considering giving up his studies because of an alcoholic parent. Miyazawa offers to pay his tuition for him, but the boy turns him down, studying is a frivolous affectation that he can no longer afford.

Though he talks of romance, Miyazawa prefers the one of the mind to the one of the heart. A young woman falls in love with his writings and, she thinks, with him though Miyazawa explains that her feelings are too big for him to process – just as one cannot eat all the clouds in the sky, he cannot accept the weight of her emotion. Knowing that his health is failing, Miyazawa chooses a fantasy, idealised love over a physical one he fears he will abandon, cleaving to the beauty of the landscape rather than those who people it.

On his deathbed Miyazawa asks his family to throw his notebooks away – he only kept them to try and figure things out but he feels as if he knows all he needs to know by now. Miyazawa’s constant search, as it was for the characters of Night on the Galactic Railroad, was for “true happiness” – perhaps he found it, perhaps not, but thankfully his work lived on thanks to his brother who later took up his interest in agricultural reforms. A typical prestige picture of the time, Night Train to the Stars is a straightforward biopic but one which also bears out Miyazawa’s dreamlike world view with all of its strangeness and wonder.