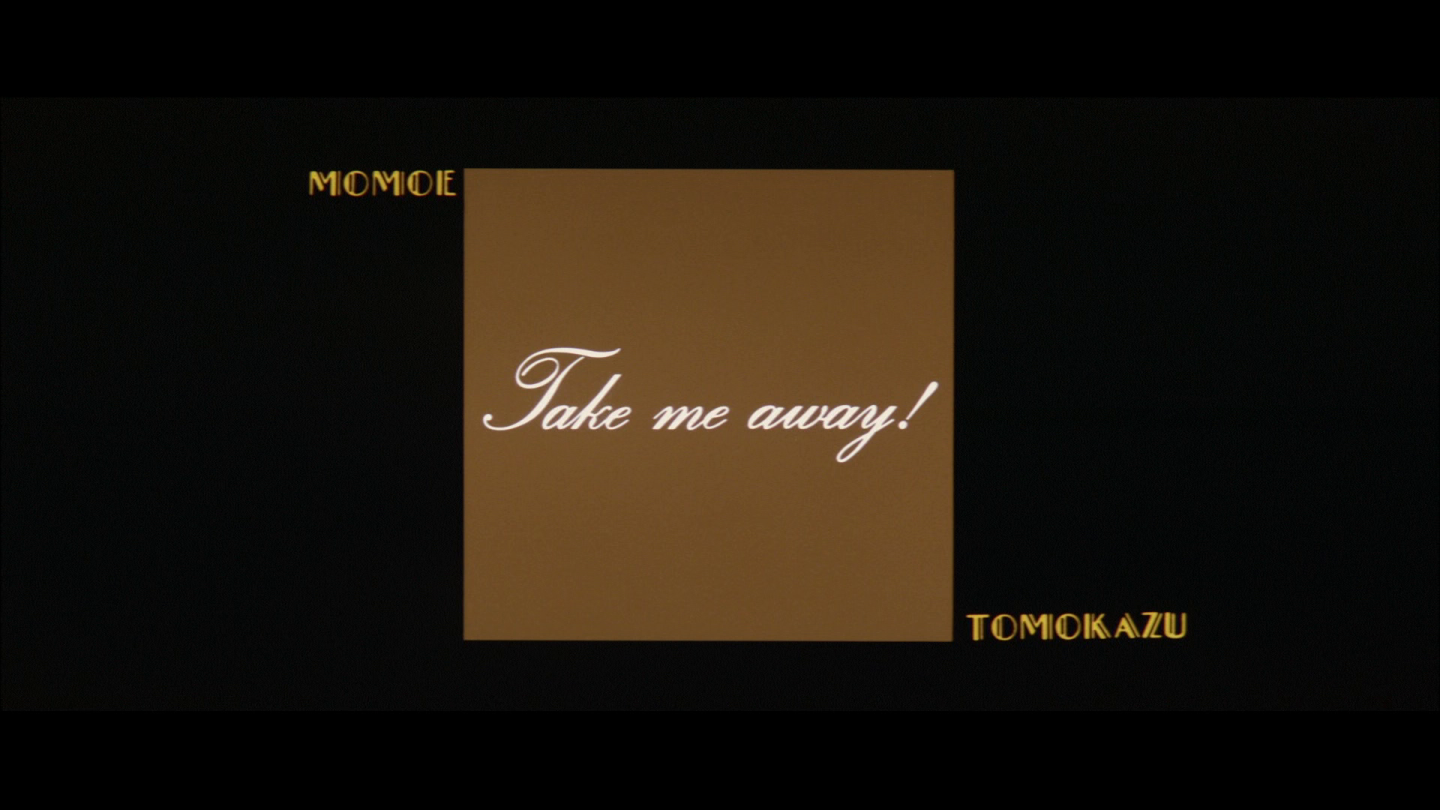 Written by Hayley ScanlonPosted on September 20, 2017Leave a comment 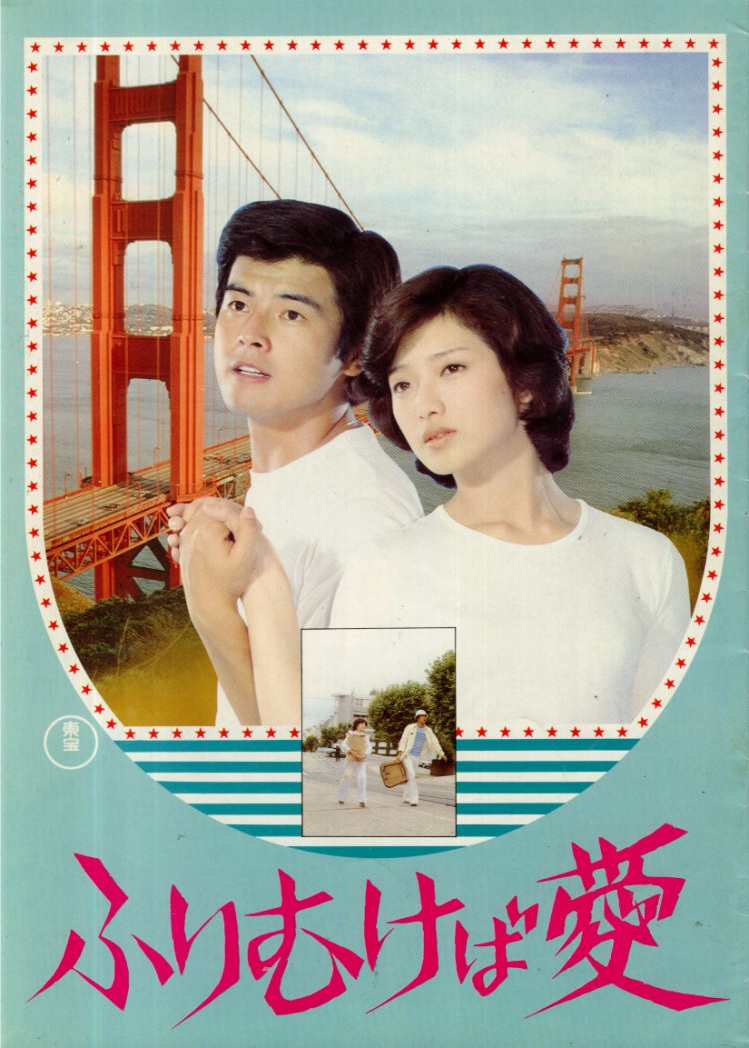 During his long and extremely varied career, Nobuhiko Obayashi was a not infrequent visitor to the world of the idol movie though his most notable entries into the genre would come in the 1980s Kadokawa heyday with the much loved The Little Girl who Conquered Time (starring Tomoyo Harada) and School in the Crosshairs (starring Hiroko Yakushimaru) among many others made for that studio alone. Obayashi’s ‘80s idol movies play very much into his key themes in their preoccupation with youthful melancholy and teenage ennui but 1978’s Take Me Away (ふりむけば愛, Furimukeba Ai) takes a slight step away from the genre norms in its slightly more grownup tale of complicated love and early life disappointments.

Beginning in typically strange Obayashi style, the film opens with some footage of abandoned machinery before the caption “Kyoko is on a journey” flashes up on the screen and we meet the woman herself (Momoe Yamaguchi) as she stares at San Fransisco’s Golden Gate Bridge.  Soon enough her view is obscured by a runaway kite bearing the name of Tetsu (Tomokazu Miura) – a young Japanese man currently living in the city. The pair hit it off while Tetsu tries to fix his both kite and Kyoko’s shoe which she broke trying to catch it. Tetsu promises to show her around San Fransisco and asks her to meet him at Union Square the next day at noon. Kyoko waits but Tetsu does not arrive – eventually a friend of his turns up in his place and Kyoko reluctantly spends a few hours with him during which she reveals that she’s on a suicide holiday and is about to go back to her hotel room to write the note. Finally Tetsu arrives, takes her to a hippy beatnik club where he sings her the title song of the movie, and the pair fall deeply in love.

Tetsu promises to meet Kyoko back in Tokyo to start a life together, but once again he does not turn up. Heartbroken and worried, Kyoko searches for him but the name of a bar he gave her as a point of rendezvous seems to be fake and her letters all come back undeliverable. When she gets hit by a car driven by a wealthy businessman, another, more stable, romantic possibility presents itself but will Kyoko let her true love dream go?

Take Me Away was the eighth in a series of films which starred popular Horipro idol Momoe Yamaguchi and her regular leading man Tomokazu Miura but the couple already had a long history of working with Obayashi in his career as a director of TV commercials. In fact the pairing which would eventually become a real life marriage was born thanks to Obayashi who was casting around for some stars while he made commercials with Miss Lonely apparently already on his mind. Obayashi was offered the chance to direct Yamaguchi’s cinematic debut but the dates didn’t line up and she made her first film, an adaptation of Yasunari Kawabata’s The Dancing Girl of Izu, with Katsumi Nishikawa instead.

This being the eighth Yamaguchi/Miura romantic drama the stakes needed to be raised – hence the decision to shoot for real on location in San Fransisco. Like many idol movies, the temporary shift away from the regular world the leading lady inhabits provides her an occasion to reinvent herself and the jet-setting, glamorous American holiday is certainly in keeping with the new, globally minded youth of Japan interested in transgressing borders of all kinds. When Tetsu meets Kyoko, she spins him a tale about diplomat parents that sounds like it could come out of any idol movie but in a departure from the norm it’s a part of her new holiday persona. In truth, beatnik dropout Tetsu is the posh one, a runaway son of a wealthy doctor, while Kyoko’s origins are humbler – she’s saved the money for this extremely extravagant holiday while working not as a concert pianist as she claimed, but as a piano tuner (making her choice of a Holiday Inn less strange in retrospect).

Though many idol movies centre around their teenage target audience, Kyoko and Tetsu are very noticeably grown up, already leading “adult” lives, no longer students but young people living semi-independently. This is brought home by the incongruous inclusion of a sex scene – the first in the series of films starring Yamaguchi and Miura, something which would not usually feature (at least explicitly) in the generally innocent idol movie world. Obayashi chooses to shoot this in an artistic, surreal, and impressionistic rather than naturalistic manner which shows the pair lying together naked (Yamaguchi covers herself with an arm) with a superimposition of the couple about to kiss over the top while the entire scene is bathed in golden white light. The sequence is one of the few typically Obayashi flourishes seen in the film (others include the title sequence, obvious Pan Am model shots, illustrated starry skies, and a slapstick brawl conducted to ‘20s jazz), but it perfectly captures the glory of young love so central to the early part of the film.

Of course, it doesn’t last. Holiday romances are one thing, but Tetsu proves to be a flaky sort of guy on every conceivable occasion until he’s finally dragged back into Kyoko’s orbit and vows to give up on his half-hearted ways once and for all to finally be true to his one true love. Kyoko’s second chance – a marriage proposal from the CEO who ran her over looks like the better option, that is until he shows his true colours at the film’s climax. Just as Tetsu leant meaning to Kyoko’s life in San Fransisco, so she too reawakens his fighting spirit. Tetsu describes himself as like the kite which bears his name – a free floating thing whose strings have long been severed. He needs the steady hand of Kyoko to right himself again. Unlike many of Obayashi’s wistful dramas, Take Me Away has a classically happy ending though its oddly silly, slapstick quality is very much in keeping with his sensibilities. A strange brew to be sure, but one which retains the essential innocence of the idol movie even whilst moving it beyond its traditionally adolescent remit.