Written by Hayley ScanlonPosted on January 4, 2019Leave a comment 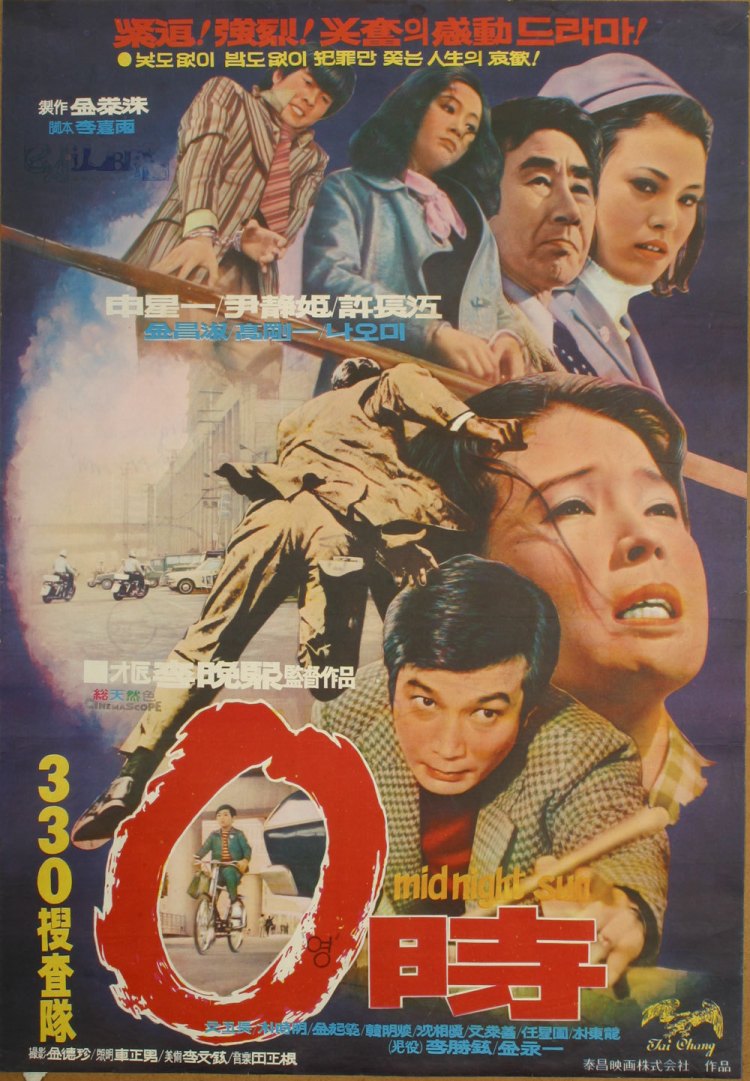 In Korean cinema, the police are a problematic presence. Often corrupt, violent, self-interested, and incompetent, even when the cops are the good guys it’s generally because they’re badder than the bad. 1972’s The Midnight Sun (0시(영시) / 0時, 0 Shi), however contains a rare example of a virtuous policeman whose fierce commitment to ethical values perhaps runs too far in endangering his role as a husband and father.

Police captain Jang Jung-han (Heo Jang-gang) has been charged with tracking down a couple of delinquents who’ve been going round committing robberies on a motorcycle they stole from the son of a high ranking police officer. Meanwhile, his son, Kyuseok, has made friends with a boy from the country, Dol Lim, who’s looking for his sister. Feeling sorry for the boy who’s all on his own, Jang takes him in until Kyuseok manages to get him a job as a greeter outside a local restaurant. Complications arise when Lee Min-soo (Mun Oh-jang), a felon previously arrested by Jang, is released and signals his intention to get revenge on Jang whom he blames for the death of his son while he was inside.

Jang is in all ways a model police officer who is good at his job and pursues all of his investigations with the utmost professionalism. His work is, however, not always compatible with being a regular family man. An early scene sees him greeted by his young son, up early on a part-time job delivering newspapers on his flashy pushbike, who reminds him he’s not been home in a couple of days. Kyuseok has been given a message from both his aunt and his mum to make sure his dad remembers to come home early – Jang has completely forgotten that it’s his wife’s birthday (and not for the first time).

Though she has long made her peace with being a policeman’s wife, Mrs. Jang (Yoon Jeong-hee) has her share of troubles with a husband whose safety is not assured while he is often absent from home for extended periods of time. Jang’s salary is also comparatively low and the family have a very modest quality of life with little chance of any kind of advancement. For all of these reasons, she counsels her sister, Hye-rung (Kim Chang-sook), not to get into a relationship with Jang’s junior officer, Park (Shin Seong-il). Hye-ryung, unmarried, lives with the Jangs and works as a tour guide on a tourist bus. Rather than advocating marriage, Mrs. Jang thinks her sister should look into becoming an air hostess, hinting at new possibilities outside of the home for the next generation of Korean women. Despite her sister’s advice, however, Hye-ryung purses a tentative, spiky romance with Park even if somewhat irritated that he only takes her out for noodles rather than something fancier. A policeman’s salary only stretches so far, after all.

Jang’s loyalties are strained when his cases begin to overlap. Lee Min-soo has returned from his prison sentence to find his wife has left him for another man and his son has died. Lee only turned to crime because his son was ill and he needed money for medical treatment, but Jang wouldn’t listen to his mitigating circumstances and arrested him anyway. While he was inside his boy died and Lee holds Jang responsible. In revenge, he kidnaps Kyuseok but rather than drop everything to look for his son, Jang continues to work on the delinquent case and reminds his colleagues to split their workloads. He regards his son’s predicament as “personal” and refuses to dedicate extra resources or take men and time away from other matters for his own benefit. Jang’s coolness further strains his relationship with his wife who can’t understand why he isn’t trying harder to find their son. Yet in Jang’s officious mind, to do so would be wrong and a betrayal of his duty as a police officer.

Lee eventually decides to give up on his revenge and let Kyuseok go after bonding with the boy and being swayed by his cheerful innocence. Kyuseok forgives his kidnapper and wants his dad to do the same. Jang too is a compassionate soul – he is eventually able to help Dol Lim find his sister though, unfortunately, also has to arrest her. Like Lee, Dol’s sister is also forced into a reconsideration of her life of crime after seeing her brother. Arrested by Jang, she resolves to atone, swaps her bright red mini skirt for modest attire, and ties her hair up in a more innocent style. She even manages to convert her boyfriend to the same cause and the pair decide to get married once they’ve paid their debts to society. Wanting to help Dol, Jang does his best to get the pair as a light a sentence as possible while ensuring justice is served both on a legal and on a human level.

Mixing the crime genre with family drama, Lee Man-hee continues his tendency towards experimentation but with a more hopeful outlook, allowing for a happier ending in which family bonds are restored and crimes forgiven rather than punished. Rather than the frustration and inertia which often traps Lee’s conflicted heroes, Jang and his family are able to free themselves from their various prisons through nothing more than compassion and goodness. Sponsored by the Seoul Metropolitan Police Agency, Midnight Sun is an oddly cheerful piece of pro-police propaganda in which the stigmatised face of authoritarian rule is given a humanising makeover even while remaining steadfast and selfless in the pursuit of justice.