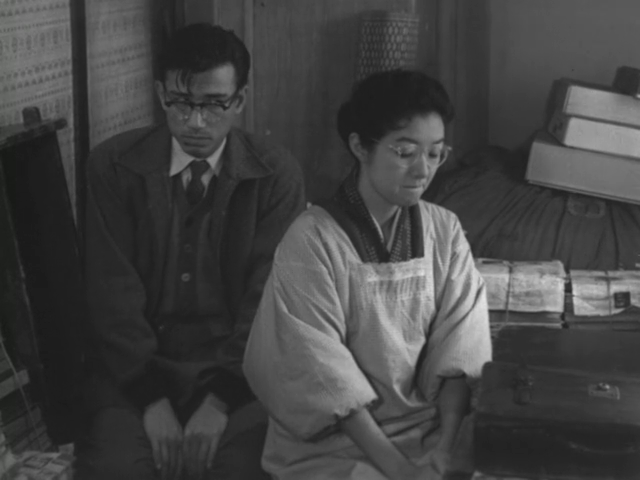 Written by Hayley ScanlonPosted on January 27, 2019Leave a comment

Keisuke Kinoshita is often regarded as a sentimentalist but he wasn’t completely immune to bitterness and cynicism as many of his farcical comedies bear out. Danger Stalks Near (風前の灯, Fuzen no Tomoshibi) begins in serious fashion as a trio of young toughs set on burgling the home of an elderly woman they assume has money but quickly descends into absurd dark humour as we discover there’s just as much money-grubbing thievery going on inside the house as out.

Two street toughs bully a nervous young man who needs money to get back to the country into joining them in a plot to rob a suburban house owned by a mean old woman whom they assume must be hiding a serious amount of cash inside. Having watched the place before, they know that it’s generally just housewife Yuriko (Hideko Takamine), her young son Kazuo (Kotohisa Saotome), and grumpy grandma Tetsu (Akiko Tamura) at home during the day after husband Kaneshige (Keiji Sada) has gone to work at his lowly job as a shoe salesman. Today, however, their aspirations towards crime will be thwarted because it’s all go at the Sato residence – flouncing lodgers, sisters with issues, tatami repair men, and mysterious faces from the past all mean that today is a very bad day for burglary but a very good one for entertainment.

Kinoshita deliberately upsets the scene by casting familiar actors Hideko Takamine and Keiji Sada in noticeably deglammed roles – she with a ridiculous pair of large round glasses and he with a giant facial mole designed to make them look “ordinary” but accidentally drawing attention to their star quality in the process. The Satos are, however, a very ordinary family in that they’re intensely obsessed with money and with their own precarious status in the improving but still difficult post-war economy. Tetsu is Kaneshige’s step-mother which is perhaps why he urges his wife to put up with her tyranny seeing as Tetsu is old and will probably not be around much longer, which means it’s just a waiting game until they inherit the house. Whatever else she may be, Tetsu is a mean old woman whose only hobbies are penny pinching and occasional trips to the cinema where she watches heartwarming dramas about filial piety. Her haughty attitude is perhaps why the crooks assume there is cash in the house but sometimes mean people are mean because they really don’t have money rather than just being stingy by nature.

Nevertheless, Tetsu’s iron grip is slowly destroying the family unit. Kaneshige (whose name ironically means “money multiplying” and uses a rather pretentious reading for his name kanji which are often misread by the postman etc) sneaks home to tell his wife he’s won second place in a competition, worrying that if Tetsu finds out she’ll expect her share of the prize money. The old woman is so mean that she even keeps her own stash of eggs in her personal cupboard along with tea for her exclusive use and takes the unusual step of locking the doors when Yuriko is out running errands because she feels “unsafe” in her own home – an ironic state of mind once we discover how exactly Tetsu was able to buy this house as a lonely war widow in the immediate aftermath of the defeat.

Tetsu is, in a fashion, merely protecting her status as matriarch in oppressing daughter-in-law Yuriko by running down her every move as well as those of her sisters whom she criticises for being dull despite their “cheerful” names but also chastises for lack of traditional virtues. Sakura (Toshiko Kobayashi) pays a visit to the Satos because she needs help – her husband has been accused of embezzlement, but is also hoping Yuriko is going to feed her in return for help with domestic tasks only the pair eventually fall out over a missing 30 yen and some crackers. Meanwhile, second sister Ayame (Masako Arisawa) also turns up but with a “friend” (Yoshihide Sato) in tow whom she hopes can become their new lodger after they ended up throwing the old one out because she burned a hole in the tatami mat floor through inattentive use of an iron. Neither Tetsu nor Yuriko could quite get their head around previous tenant Miyoko’s (Hiroko Ito) liberated, student existence of rolling in late after dates and lounging around reading magazines but a male lodger wasn’t something they had in mind either.

Persistent economic stressors have begun to wear away at family bonds – Tetsu is not a nice old woman, but it probably isn’t nice to be living in a house where you know everyone is just waiting for you to die. At least little Kazuo is honest enough to admit he only likes grandma when she gives him candy. Yuriko seems to be a responsible figure for both her sisters, but resents their relying on her for money while enjoying the various gifts they bring to curry favour including a large amount of fish cake from the prospective lodger/Ayame’s intended (if he doesn’t wind up being swayed by the dubious charms of the seductive Miyoko who insists on sitting in her empty room for the rest of the day because she already paid today’s rent). Meanwhile, Yuriko’s attempt to palm off a pair of unwanted tall geta that were a “present” from Kaneshige’s boss (who also heard about the prize money) leads to an accusation of attempted murder as if she hoped Tetsu might topple to her death after trying them on! The burglars have wasted all day sitting outside watching the ridiculous comings and goings as they bide their time waiting to strike only for the police to arrive on a completely unrelated matter. Turns out, inside and outside is not so different as you might think in a society where everything is a transaction and all connection built on mutual resentment.

Titles and opening scene (no subtitles)