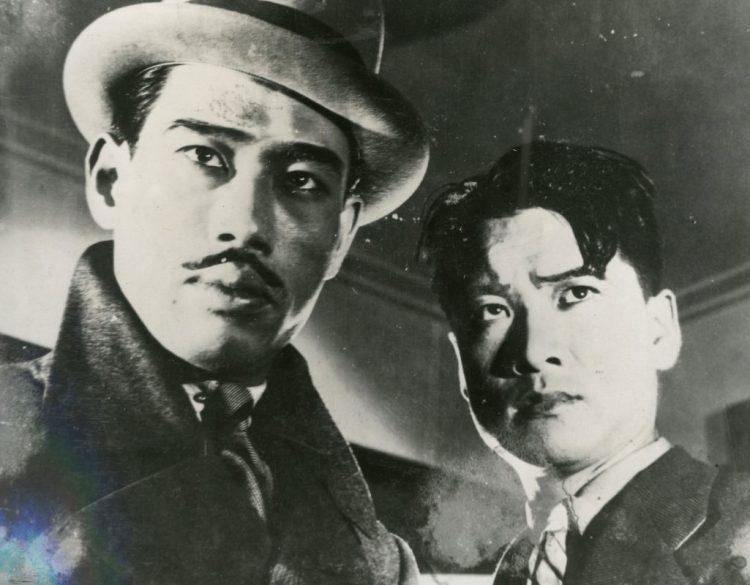 The picture one gets of the 1930s is largely one of fear and oppression, especially in Korea under the increasingly brutal Japanese colonial regime, but then it was also a time of intense social flux in which the continuing influence of Western culture and the effects of the great depression placed the traditional way of life into question. 1936’s Sweet Dream (迷夢 / 미몽, Mimong, lit. “delusion”) is, at the time of writing, the oldest extant sound film, and perhaps attempts to kick back against the “corruptions” of the modern age in telling a tragic story of ruined motherhood in which a young woman’s desire for material wealth and a social freedom eventually draws her to her doom.

Our “heroine” is Ae-soon (Moon Ye-bong), a married wife and mother who resents the restrictive nature of her life and attempts to escape it through embracing the “modern” hobby of shopping – with her husband’s money of course, while neglecting her young daughter Jeong-hee (Yoo Seon-ok) whom she perhaps sees as a symbol of the forces which make her a prisoner of her own home. It’s on a shopping trip that she begins her descent into ruin when she’s spotted by the extremely suspicious-looking Chang-geon (Kim In-gye) who swipes her handbag while she’s busy wrapping up purchases only to give it back to her as a kind of meet cute. Nevertheless, Ae-soon is smitten, especially as she believes that Chang-geon is extremely wealthy. Kicked out by her husband for her increasingly unacceptable behaviour, Ae-soon moves in with Chang-geon at his hotel and embarks on the fun loving and fancy free life of her dreams.

As might be expected, the film does not end there and Ae-soon will pay for her “selfish” choice to pursue pleasure in her own life rather than channelling all of her hopes and desires into her family as a woman is expected to do. Truth be told, Ae-soon is not a particularly sympathetic woman, especially as her husband Seon-yong (Lee Keum-ryong) is portrayed as kind, sensitive, and devoted to his daughter who is clearly his primary point of concern in his dealings with his wife. It is therefore difficult to sympathise with her dissatisfaction in her married life which, externally at least, appears comfortable, stable, and close to the ideal that many young women would hope for in a society which continues to favour arranged marriage.

What Ae-soon wants is something which a woman is not allowed to have – freedom. Then again, the film asks us to set aside the natural desire to be free and see Ae-soon’s refusal to conform as a corruption born of excess modernity. Rather than abandon her home to pursue a career or a dream, Ae-soon leaves in pursuit of a man and even then she pursues him not for reasons of love or desire but greed. No sooner has Ae-soon begun to discover that Chang-geon is not all he claimed to be than she’s planning the next conquest in chasing a famous dancer she quite liked the look of at the theatre the previous evening when Chang-geon skipped out to meet a “business associate” leaving her feeling neglected. Unable to chase material success off her own bat, she chases it through men by using her sexuality which places her at the wrong end of just about every social code going even while she herself continues to abide by the tenets of those social codes by remaining in a monogamous relationship with Chang-geon which is in reality not so different from her marriage save for the absence of her daughter, the fact they live in a serviced hotel, and the illusion of having more money and with it more social power.

Ae-soon is no Nora. Her decision to abandon her daughter isn’t born of a sudden awakening to the destructive effects of patriarchy (which the film otherwise belittles in its casting of Ae-soon’s dissatisfaction as a dislike of housework), but of “mistaken” ambition which, paradoxically, she pursues through trading up her sexual partners in order to increase her material wealth and social standing. Ae-soon rejects her maternity and with it her daughter because she wishes to assert her own identity and finds it impossible to maintain both within the society in which she lives, but allowing a woman to reject the ideas of home and family, as Ibsen had done 50 years previously, is too dangerous an idea for the Korea of 1936 and so Ae-soon’s “sweet dream” is in effect a siren song which will lead her down a dark path towards the only redemption possible for a woman who has betrayed the very idea of what society believes a woman to be.

Strangely enough, Sweet Dream was commissioned as a public information piece sponsored by the Choman Traffic Office as the first “traffic film” intended to increase awareness of traffic safety which is why the subject features so prominently throughout culminating the heavily foreshadowed traffic accident that provokes Ae-soon’s reawakening to her latent maternity. Understandably unhappy, the sponsors requested that the next traffic film be “more cheerful and artistic” yet what could be more symbolic (except perhaps a train) of the dangers of modernity than a speeding motorcar? Ae-soon should perhaps have learned to look both ways and cross when the going’s clear, but then again the film seems to insist that the safest place for her to be is inside the cage, that the only path to “happiness” lies in learning to accommodate oneself within its confines as any attempt to deviate from the accepted course will lead to disaster not only for the individual but for society as a whole.