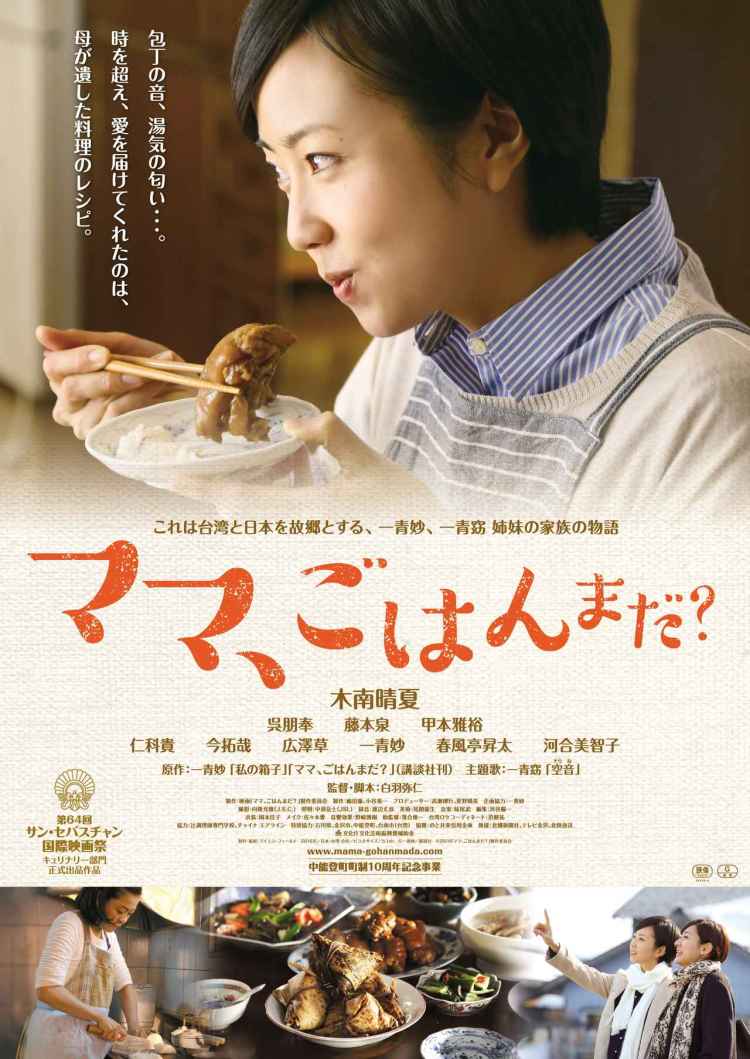 Japanese cinema has a preoccupation with mothers and the nature of motherhood, but the mothers of the typical “hahamono” tend to be either saintly, self sacrificing figures whose selfless love often goes unrecognised, or problematic matriarchs whose fierce love and desire to protect their children has caused them to transgress and perhaps lose their children’s love. The mother at the centre of What’s For Dinner, Mom? (ママ、ごはんまだ？, Mama, Gohan Mada?) falls into a more realistic category – loving, self sacrificing, imperfect and perhaps sometimes misunderstood but always doing the best for her two daughters even in difficult circumstances. Where What’s For Dinner, Mom? differs from the accepted pattern is in its use of the domestic world to ask questions about culture and identity, and about all the various ways one never quite knows one’s family.

Tae (Haruka Kinami) and Yo (Izumi Fujimoto), sisters and now middle-aged women, are preparing to clear their family home 20 years after the death of their mother (Michiko Kawai). What’s taken them so long to make the decision is never revealed but both are as happy as possible about the idea and it seems Tae and her husband plan to knock the house down and build their own on the same plot – not quite so radical a thing as it might sound, Japan has no real housing market and “modern” houses are often knocked down and rebuilt every 20 to 30 years. Whilst packing things away, Tae finds a small box full of her mother’s keepsakes – chiefly letters and photographs along with a handwritten recipe book she began keeping in 1972.

Though Tae has lived in Japan for all her adult life, she was born in Taiwan and is half Taiwanese. Tae’s father passed away from lung cancer when she was small, but was a depressed, sometimes difficult man with ambivalent feelings towards his home nation. His own family had come from the mainland, but he’d lived in Taiwan under Japanese rule and attended university in Japan. He felt himself to be Japanese and was constantly upset and angry about the turbulent political situation of the post-war nation, facing its own series of identity crises and a protracted period of oppressive martial law.

Nevertheless, after their unpredictable whirlwind romance, Tae’s mother Kazue moved to Taiwan to live with her husband’s family and became determined to adapt to the local culture – chiefly through food. After her husband died in Japan, Kazue kept Taiwan alive for her daughters through continuing to cook the dishes she’d learned from her friends and family in Taiwan (even though her intensely “Japanese” husband only ever wanted to eat yudofu). Though Tae at one point urged to her mother to stop cooking Taiwanese and give her stereotypically cute high school bento, she quickly realised her mistake and Kazue’s unusual Taiwanese cooking became a local hit (even boosting the availability of the previously unobtainable pig’s trotters).

Despite her love of the food, Tae has all but forgotten her Taiwanese roots since her mother’s death and doesn’t know how to cook any of the dishes herself. Tae’s mild identity crisis comes to the fore in the second half of the film, though it’s an oddly under developed plot strand given the centrality of the cuisine. When she eventually makes the decision to visit her father’s remaining family, Tae seems to understand Taiwanese Mandarin but usually replies in Japanese (her uncle, accompanying her, is fluent). Like Kazue’s diary, Tae’s reminiscences are accompanied by on screen intertitles written in Chinese characters drawn childishly (even the characters which are identical to those used in Japanese are somewhat awkwardly rendered), which points to a kind of duality but is never really resolved even if Tae is able to explain a strange childhood memory and bring a piece of her past home with her.

Through her food odyssey and return to source, Tae is able to appreciate her mother’s love and sacrifice from an adult perspective, no longer left with teenage resentment and unfair anger over her early death but reclaiming her happy memories and appreciating the hardship her mother must have faced as a single mother in pre-bubble Japan. Despite its warm and fuzzy tone, What’s For Dinner, Mom? occasionally seems as if it wants to do something bigger by briefly introducing larger themes – Tae’s father’s depression, illness, the difficult political situation of post-war Taiwan, and the complex interplay between the two nations, but is content to settle back into a comforting “hahamono” tale of selfless motherhood finally appreciated only when it’s too late. Nevertheless it does what it set out to do in telling the story of a warm and loving family anchored by a kind yet determined woman and tables full of wholesome home cooking offered with an open, internationalist, heart.