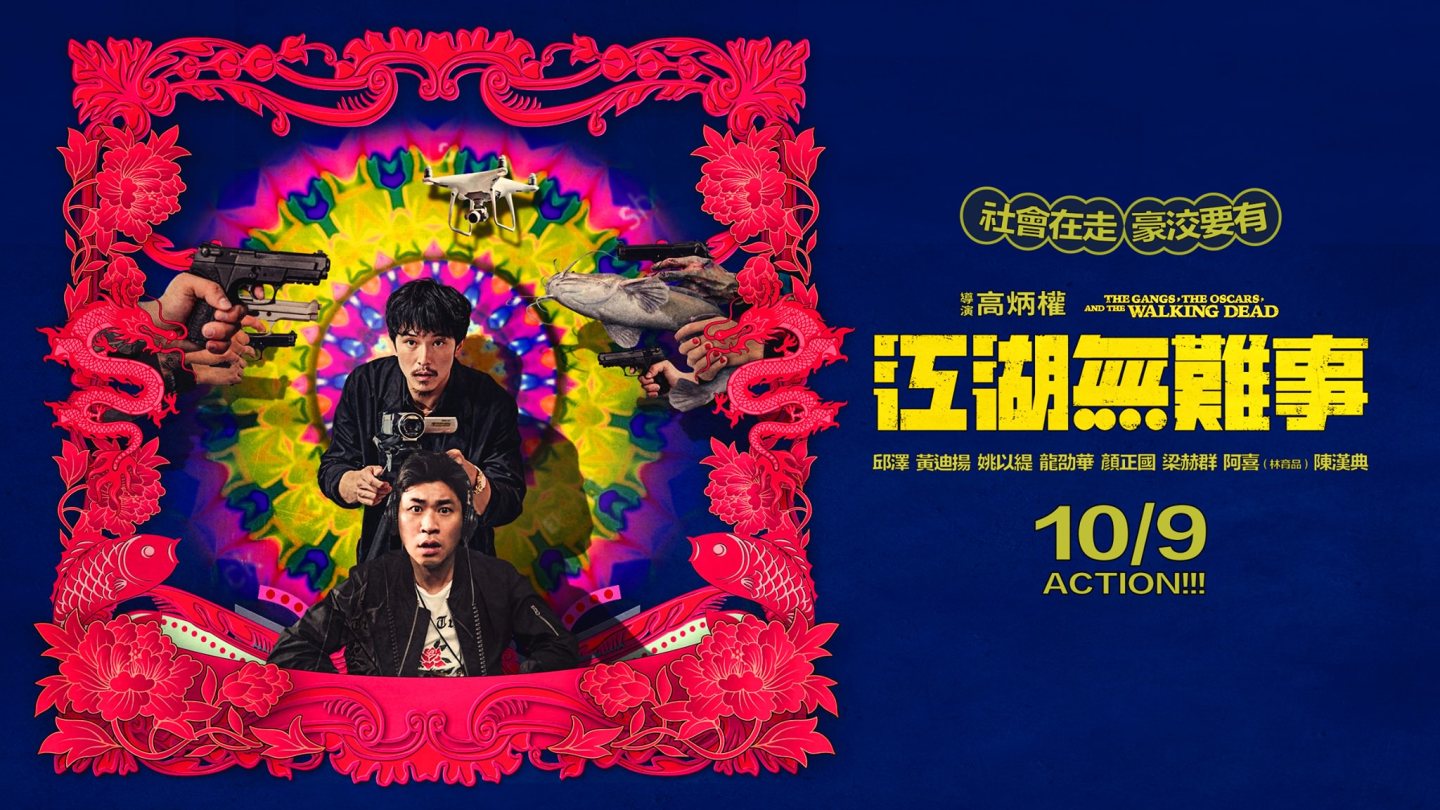 You remember that film back in the ‘80s where those guys go to their boss’ house for a party only he’s dead but they want to have a good time without being murder suspects so they pretend that he’s alive, only it turns out he was going to have them killed because they found out about his massive fraud and embezzlement? The Gangs, The Oscars, and The Walking Dead (江湖無難事, Jiānghú Wú Nán Shì) is kind of like that, if lacking the mild critique of rampant consumerism.

Our heroes are BS (Roy Chiu), a film producer, and his director/childhood best friend Wenxi (Huang Di-yang). Wenxi is a lifelong film buff who decided he had to grow up and make a zombie movie after falling in love with hopping vampires from Hong Kong. BS has been trying to make his friend’s dream come true, but the production gets derailed when the lead actor is engulfed by a sex scandal and the guys end up taking on odd jobs to make ends meet one of which involves filming the funeral of a recently deceased mob boss who later joined the boy scouts to give back to the community. The job goes just about as wrong as it’s possible to go seeing as they manage to set fire to the corpse, but somehow they manage to impress Boss Long (Lung Shao-hua) who agrees to fund their movie on the condition that part of it is shot in Japan, and his girlfriend Shanny (Yao Yi-ti) gets to play the lead.

The second part is more of a deal breaker than the first because Wenxi’s long gestating zombie script revolves around a pure and innocent high school girl who quickly gets zombiefied during the initial outbreak but somehow retains her humanity while a heroic PE teacher/gangster falls in love with her as they fail to survive the apocalypse. Shanny is many things, but passing for a high schooler will be a stretch and in Wenxi’s eyes at least she is neither beautiful nor “pure”. To be fair, Shanny does look as if she may have suffered a lot in her life, but Wenxi’s peculiar obsession is with a mole on her face which he seems to find unsightly. In any case, it’s not a problem for very long because Shanny ends up dying during a freak accident at the launch party leaving the guys with several problems of a different order. Afraid of Boss Long, they decide to hire a top SFX artist and manipulate Shanny’s body as if she were a puppet so no one knows she’s dead.

Sadly the film has little sympathy for Shanny who is treated more or less as a human plot device, a ridiculous figure of fun who seems to have sealed her own fate by being an “immoral” woman involved with a man like Boss Long who is, we find out, using her in more ways than one as are his not so loyal henchmen. Latent misogyny later gives over to mild homophobia as the boys figure out that Shanny got her unusual looks after getting plastic surgery to look like her favourite drag queen, so they decide to try asking him to help out, playing into an extended joke about Boss Long being fooled into canoodling with a man.

The theme, however, is brotherhood and loyalty not only between BS and Wenxi, but also Boss Long, Shanny/drag queen Hsiao Ching, and the gang. You have to die to figure out who your real brothers are, according to Boss Long, and it’s a lesson which gets put to pretty good use by just about everyone. At the end of Wenxi’s screenplay, everyone is supposed to become a zombie – the ultimate end of the world pay off for anxiety suffers, at least you won’t have to worry about getting zombified anymore, but is intended to render everyone “equal” so the world is “fair”. There is something quite ironic therefore in their unwitting zombification of Shanny, exploiting her body even after death while playing at being tough guy gangsters so they can make a film with zombies in it they are certain will win an Oscar. Aside from all that, however, the Wenxi gets his “happy” ending which eventually honours Shanny’s memory while cementing a feeling of brotherhood and acceptance placing Hsiao Ching firmly at the boss’ side as they look forward to a bright new movie making future founded on the ashes of the violent past.

The Gangs, the Oscars, and the Walking Dead was screened as part of this year’s Osaka Asian Film Festival.