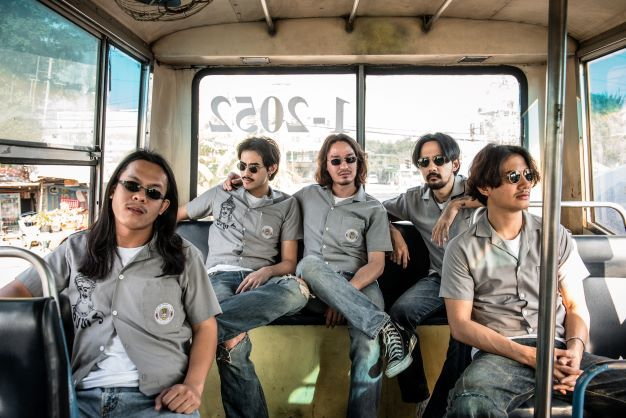 Marginalised young men turn to internecine gang violence in ‘90s Bangkok in Puttipong Nakthong’s edgy youth drama 4 Kings (4 Kings อาชีวะ ยุค 90’s). In essence a high school delinquency movie, 4 Kings finds little glory in pointless macho posturing but suggests that the older generation is no different, a parade of absent or authoritarian fathers no better than the sons they criticise attempting to preserve their patriarchal authority through threats of violence while roundly rejecting the right of these young men to try to make a life for themselves simply because of their social class and a stigma surrounding vocational schools.

In a framing sequence set around 2010, the hero Billy (Itchnakorn Pheungkiatrasmee) has become an embittered middle-aged man with a drinking problem bringing up his teenage daughter Amm alone though she holds only contempt for him. When Amm is caught up in gang violence and injured while he is unable to protect her, it forces Billy to remember his own past as a high school delinquent especially when he recognises her teacher as former gang rival. Flashing back to 1995, Billy is one of four guys representing their school as a street gang engaging in pointless fights with rival institutions while experiencing problems at home with his authoritarian stepfather who has already written him off causing him to temporarily move in with best friend Da (Arak Amornsupasiri) and his warmhearted mother. Da meanwhile has problems of his own as his girlfriend Au whose father is a local policeman has become pregnant and though he wants to do the right thing and raise his child his prospective father-in-law does not approve.

Though they treat the boys like stray dogs and openly insist that they have no future nor any right to one, the fathers behave no better expressing their patriarchal authority though macho posturing. Au’s father more or less describes Da as a thug no good for his daughter insisting that only he has the right to decide who she dates or marries but then punches him in the face and threatens him with his service gun. Billy’s dad meanwhile barks that “there’s no point being nice to him” telling Billy to go sleep in a dog’s cage, insisting that he needs “discipline” because he has his father’s “vile blood” again punching him in the face and telling him to get lost and never come back. The only expression of masculinity the boys have ever learned is exerting their dominance through violence so it’s little wonder that they seek the same kind of validation in fighting each other in the streets with only the solace of the solidarity they find among their friends and allies.

After all, everyone is telling them they have no future anyway because they attend a technical high school and are already at the bottom of the social ladder with no real prospect of moving up. The boys don’t know why they’re fighting each other merely owning the uniforms they’ve been given. When Billy is sent to prison after his stepfather refuses bail and decides to press charges on the theft of his camera, he ends up becoming friends with two guys from other gangs now each on the same side wearing the white T-shirts of prison inmates while finding themselves lost within an entirely different gang hierarchy of which the guards are at the top. Meanwhile even on the outside there are other elements too such as randomer drug dealer Yad who has a beef with technical students in general but is otherwise outside of their struggle. The former prisoners might individually have decided to put their differences behind them but are still members of their respective gangs and it’s a minor irony that the climactic act of violence which changes each of their lives occurs only after they’ve graduated and are no longer members of their respective schools.

Even so as the framing sequence makes clear, the legacies of these intergenerational conflicts continue to echo into the present with Billy “wallowing in the past” as he struggles to raise his daughter she wondering if he really loves her or only feels an obligation while he struggles to get over his delinquent past even after having made a good life for himself as a successful contractor. 4 Kings certainly does not glorify gang violence even if it may celebrate the brotherhood between the young men who are basically good at heart just hotheaded and immature making bad decisions and paying a heavy price for them, but may in a sense also glamourise the same kind of macho posturing the film otherwise critiques especially in its post-credits sting teasing the possibility of a sequel if ultimately undercutting it with its otherwise positive conclusion healing the generational divide through emotional honesty.