An adulterous bulldozer operator in north east China finds himself in conflict with a failed construction magnate when his wife insists he find a new home for their Alsatian before their baby arrives in Geng Jun’s dark comedy Manchurian Tiger (东北虎, dōngběihǔ). A Manchurian tiger does indeed appear at certain points of the film, a child at the zoo asking their grandfather why the rather morose beast does not roar only to receive the explanation that the tiger is all alone with no one to talk to. The child sadly reflects that it’s like the tiger is in prison, but the grandfather corrects them that it’s in there for its own good so that it can be protected, loved, and admired, but its plight still calls out to an emotionally wounded poet (Xu Gang) who is also no longer young and feels isolated and constrained by the world around him.

As for bulldozer operator Xu (Zhang Yu) who it seems may once have been a teacher, his problems seem to lie more in the inability to reconcile his conflicting emotions towards his family. His wife Meiling (Ma Li) tells him to get rid of the dog because it’ll be too much for them when the new baby arrives and he complies but is also sickened when he’s met with only prices by the pound on trying to find it a new home. He unwisely decides to leave the dog with a local businessman, Ma (Zhang Zhiyong), but Ma slaughters it to curry favour with a pair of “collection agents” he hires to help him get back money he invested into a construction project that’s clearly gone south and in truth sounds like it may have been a scam to begin with. When the heartbroken Xu discovers the truth he vows revenge only for a strange sort of solidarity to arise between them in shared victimhood both bested by the problems of the modern society in the formerly industrial north east.

Ma could try to make the case that he’s a victim too and he is in a sense but he’s also a conman as Xu later brands him. Even so he does seem to feel some remorse if not for eating Xu’s dog then at least for plunging his friends and family into financial ruin after they sunk their lifesavings into his project because they believed in him. As he puts it they all, he included, fell for the fantasy of the modern China believing they could all get rich quick only to be undercut by the ironic flip side when cost cutting and subpar materials prevent the apartment block from being finished leaving Ma high and dry unable to recoup his costs until the apartments can be sold. The debt collection agents he unwisely hires are just thuggish loansharks who then ask him for a hefty deposit, smashing up his car to make a point when he tries to use it as collateral.

In essence it seems as if all Xu wants is to Ma to apologise to the spirit of his dog but Ma apparently values his pride above money and complains the price is too high while Xu resents the attempt to place a monetary value on his friend or imply that perhaps his own flesh also has a price. He’s clearly in a space of mental despair, reminding his mistress that like the tiger he’s no longer young and has exhausted all other opportunities to improve his life so the only thing he has left is his marriage. As his wife Meiling starts starts visiting several women around the local area after noticing the scent of perfume along with stray hairs on Xu’s clothes, it becomes clear he has had several affairs already and is seemingly being punished for his sexual transgressions which are perhaps an attempt to escape his own sense of imprisonment, as caged as the tiger by his familial responsibilities and humiliated by the inability to meet them.

Yet none of these men, not Xu, nor Ma, nor the dejected poet are going to roar because they’ve long since accepted their captivity and believe themselves already too old to risk escape. A fight eventually breaks out among Ma’s creditors when one suggests that the money should first be given to the young because they will spend it, keeping the money moving through an uncertain economy, while the old will save having learned to be cautious amid the vicissitudes of life in a rapidly changing society. Darkly comic and tinged with the fatalism of Sino-noir along with its jazzy score, Manchurian Tiger seems to suggest that the cage is infinite and the only escape lies in accepting its myriad disappointments.

Manchurian Tiger screened as part of this year’s New York Asian Film Festival where it was presented in partnership with CineCina. 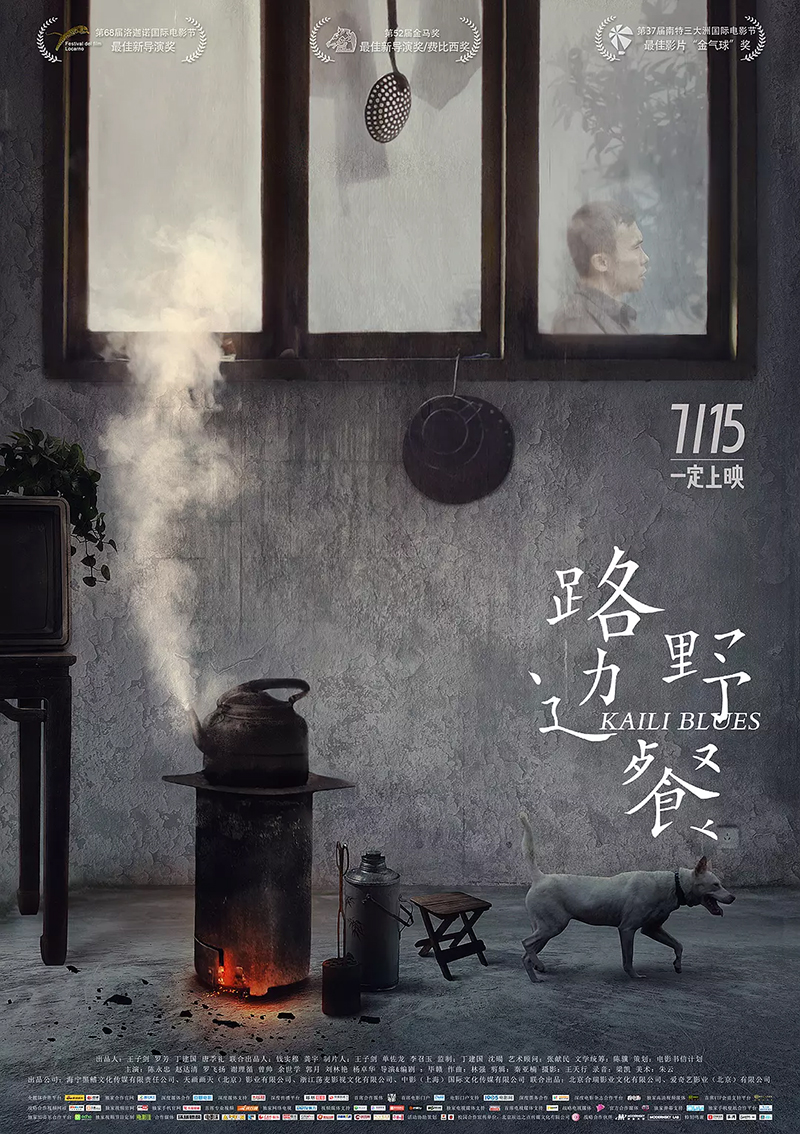 “There is bound to be one who will return, to fill an empty bamboo basket with love.” intones the lonely poet at the centre of Bi Gan’s Kaili Blues (路边野餐, Lùbiān Yěcān) part way through his strange odyssey through the tiny yet infinite village of Dangmai, a place either out of time or entirely made of it. Longing, regret, the temporal impossibilities of memory, injustice, disappointment – a lifetime’s unresolved emotional trauma works its way into a dreamlike exploration of the past as a work in progress, half built but already obsolete. Time is just memory mixed with desire, in the words of another poet, and contrary to conventional wisdom, perhaps it does not flow ceaselessly in only one direction.

Our hero is Chen (Chen Yongzhong) – a middle aged doctor and published poet who once served time prison and inherited the money to start his clinic from his mother who passed away while he was inside. His major preoccupation in life is his young nephew – the son of his half-brother, the aptly named Crazy Face (Xie Lixun). Crazy Face is, to put it mildly, not a reliable father and often locks his son, Weiwei (Luo Feiyang), in their apartment while he wastes his life drinking and gambling. Chen has taken it upon himself to ensure the boy is well looked after – taking him on days out to the amusement park, buying him nutritious dinners, and just generally keeping him company. Chen is even prepared to adopt the boy, but Crazy Face is resentful and vindictive, irritated their mother left the family home to Chen and not to him. Eventually, Crazy Face “sells” Weiwei to an old man in another town, Zhenyuan, and Chen decides to try and fetch him back while delivering a long overdue message from his assistant to a man she once knew there before the cultural revolution who is now gravely ill.

Chen himself was once abandoned in Zhenyuan, by the mother who now haunts his dreams with the sound of lusheng pipes and memories of the Miao people who are now themselves rapidly disappearing. All Chen can see of her in his dreams is her shoes with their floral embroidery, distorted by their journey in the water. His assistant urges him to burn some paper money for her that she can use in the afterlife but to do it when no one’s looking – such ancient superstitions, like the lusheng pipes, are not to be seen or heard in the new “modern” China. Even Chen’s clinic is due to be pulled down, rendering the animosity between himself and his unhinged brother all the more pointless.

Looking for the lonely boy, who is also in a way himself, Chen chases ghosts of future and past. His passage to find the famed lusheng players and the last remnants of the Miao is precipitated by an act of fate – a young man’s attempts to kick start his motorbike to give his “girlfriend” (he seems to think that what she is, she may feel differently) Yangyang (Guo Yue) a lift fails miserably and she gets one from someone else, enabling Chen to climb on. Later we learn the young man’s name is Weiwei, and his mission is that he wants to make time run backwards because Yangyang is leaving to go to Kaili to work as a “tour guide” (it remains unclear who needs a tour in Kaili) and says she will only return if he can “turn back time”. Whether this Weiwei is somehow the teenage version of the boy Chen was looking for or not, he shares his obsession with imagined time, scrawling fake clocks on trains so that time really will be running backwards as one train passes another as if travelling into the past.

If the future can yield its ghosts then the past can too. A young hairdresser is the spitting image of Chen’s late wife who, according to a story he tells her disguised as that of a friend, he discovered had died while he was is in prison but had written him several letters in advance to hide the truth. Chen’s strange life, his time “on the streets” and accidental involvement with a stoic loanshark who accepted the death of his son at the hands of an enemy but demanded vengeance for his severed hand, might as well have been a dream for its all meandering disappointments. The gangster is now a horologist, as luck would have it. Even dreams have their logic. Only on arrival at his secondary destination does it all come together, the dream world and the real somehow merging and becoming whole once again. The past is a call that can’t be answered, but must be heard all the same.

Follow Windows on Worlds on WordPress.com
Join 334 other followers