Strangely enough, North Koreans in South Korean films are often marked by a naive nobility, filled with all the “goodness” that is otherwise so absent from the hypocritical egalitarianism of the nation that raised them. Jang Hoon’s Secret Reunion (의형제 / 義兄弟, Uihyeongjae) is a perfect example of the ongoing trend in its direct contrasting of a pure hearted North Korean operative betrayed by his comrades, and the cynical NIS officer who turns to a shady career in the private sector when a botched operation gets him fired. An interesting look at North/South relations, Secret Reunion is equal parts buddy cop comedy and probing thriller but places the heartfelt connection between its perfectly mirrored protagonists firmly at its centre.

North Korean agent Song (Gang Dong-won) reads a bedtime story to his unborn child over a telephone whilst preparing for an operation south of the border, while NIS officer Lee (Song Kang-ho) bickers with his wife about their daughter’s education. Song, along with another agent, Tae-soo (Yoon Hee-seok), is to meet a top North Korean hitman known as Shadow (Jeon Kuk-Hwan) and assist in his mission to take out a prominent North Korean defector. Horrified by Shadow’s abrupt murder of the target’s wife and mother-in-law, Song draws on Shadow in defence of the man’s young son whom Shadow has also marked for death and places himself in the firing line in the process but is “saved” when Lee and the NIS turn up following a tip-off from Tae-soo who has betrayed them. Lee and Song briefly catch sight of each other but the operation is a bust which allows both Shadow and Song to escape whilst causing mass civilian casualties from stray police bullets and general panic.

Six years later Lee, fired from the NIS and divorced by his wife, spots Song again during his shady line of work as a finder of missing persons which often sees him tracking down runaway mail order brides from Vietnam. Unable to go home after being branded a traitor, Song is living as a casual labourer under a false South Korean identity. Unbeknownst to Lee he recognises the NIS agent but is unaware Lee has recognised him, especially when he offers him a job at his “company”. Song, intrigued, accepts in the hope of getting enough money together to bring his family to the South while Lee is hoping Song will lead him to Shadow and path back into the NIS but despite their best efforts the two men begin to develop a deep and warm understanding of each other even whilst working at cross purposes.

Song and Lee are indeed mirror images. When we first meet Song he’s eagerly embracing his role as a father and lamenting the fact that he cannot be with his pregnant wife while promising to be home soon. Lee, by contrast, argues with his wife over the phone and abruptly hangs up to go back to police business. Neither man is able to have the close and loving relationship with their daughters they would like – Song because he cannot return home and worries for the safety of his family, and Lee because his wife has remarried and moved to England. Lee’s loss of family is a personal failure first and foremost, but also a consequence of the botched operation in which Song escaped – hence Lee’s desire to capture Song is also part payback for ruining his life, but one which is frustrated by his gradual awakening to Song’s uncomplicated pureheartedness and identification with his own separation from his wife and child.

Song’s nobility is used against him by the heartless North Korean hitman, Shadow, who decries the “pathetic Southerners ruled by emotion” and warns Song that the “Great Nation cannot tolerate someone so fragile” when taken to task over his heartless murder of the defector’s South Korean family members. Lee, the NIS agent, resorts to barely legal immorality when stripped of his authority in becoming a finder of missing persons. The work largely involves tracking down trafficked women who’ve been tricked into coming to South Korea to marry rich and handsome men but often find themselves shackled to cruel husbands who regard them as slaves to be beaten and tortured. Yet Lee sends them back, knowing exactly what will happen to them when he does – something which Song refuses to allow. Despite coming from a brutalising regime, Song has retained his innate humanity, battles injustice and (tries to) protect the weak where Lee, a police officer in a (recently) democratic developed nation, quips about the nature of capitalism being learning to find happiness in stealing the wealth of others and is content to make himself complicit in a system he otherwise does not condone.

Despite their differences the two men come to see themselves in the other, discovering the better qualities of an “enemy” and becoming conflicted in anticipating the day when they will eventually have to confront the secrets they’ve been keeping. Jang keeps the tension high as Lee and Song play each other while Shadow dances around in the background, presumably playing a game which is entirely his own. Nevertheless the bonds of brotherhood between North and South are firmly repaired in Lee and Song’s eventual transition to blood brothers, restoring their severed familial connections whilst building and strengthening new ones. 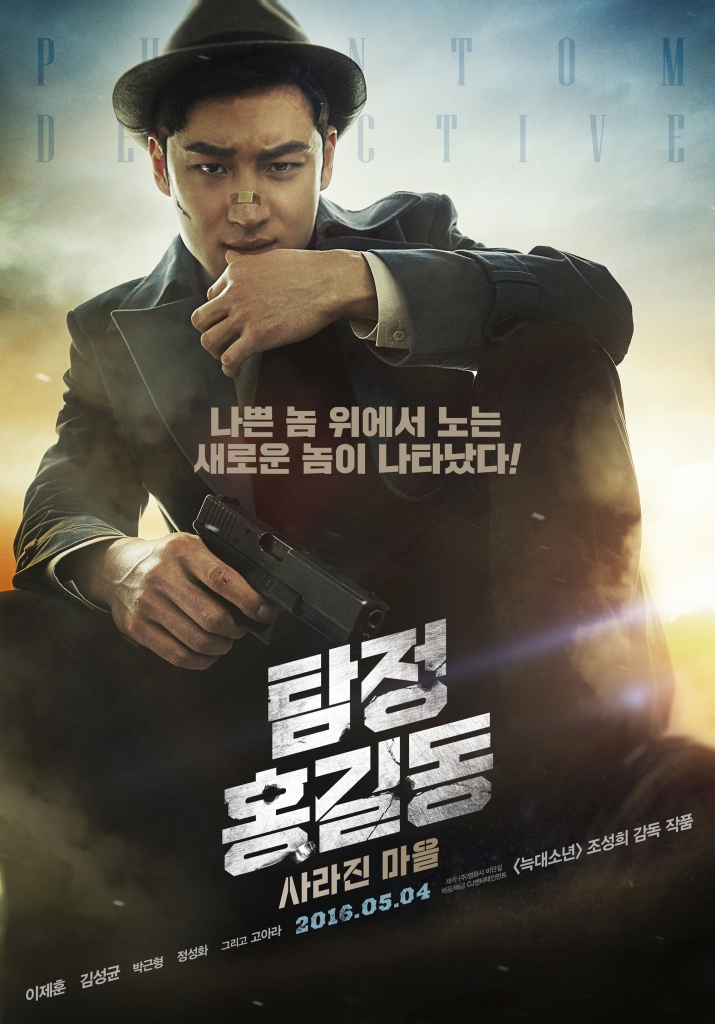 Comic books and film noir are, in many ways, a match made in heaven. Tough guys lurking in the shadows, larger than life villains and an ever present sense of the strangeness of criminality, lend themselves particularly well to the extremes of both genres which is why the combination is not exactly an uncommon one. In The Phantom Detective , director Jo Sung-hee adds an extra layer of meta textuality in naming the amnesiac hero Hong Gil-dong which is both the Korean “John Doe” and the name of a legendary Robin Hood figure from the 16th century. Like his namesake, this Hong Gil-dong is a preternaturally gifted detective with a faultless memory and an almost supernatural ability to stay ahead of the game, but he’s also a classic film noir hero with a damaged past and hollow heart…

In an alternate 1980s Korea, Hong Gil-dong (Lee Je-hoon) is an ace detective about to break a trafficking ring, which is righteous enough, but he also has another motive – these men may be able to offer him a clue to tracking down a target he’s been chasing for over 20 years. A one eyed man, Kim Byung-duk (Park Geun-hyung), contributed to Gil-dong’s origin story by murdering his mother right in front of him. At least, he thinks so – Gil-dong can’t remember anything about that day save for the visions he sees in his nightmares. In fact, he doesn’t even know his real name or who he really is.

When he finally gets to Byung-duk’s location, Gil-dong discovers he’s already been kidnapped by someone else leaving his two young granddaughters, Dong-yi (Roh Jeong-eui) and Mal-soon (Kim Ha-na), all alone. Taking off with the kids in tow, Gil-dong vows to track down “grandpa” but still has revenge in his heart. As the investigation progresses Gil-dong finds himself getting involved with the strange residents of a tiny town who may be about to fall victim to a dastardly doomsday plan engineered by a shady cult leader…

Ever since his mother’s death, Gil-dong has been unable to sleep thanks to constant nightmares and has lost the capacity for fear and empathy (qualities which serve him well in his line of work). Fiendishly clever, Gil-dong also has a sweet tooth and a sarcastic personality but despite his protestations, usually does the just thing when comes down to a straight choice. Byung-duk’s adorable granddaughters pose something of a problem for him as he begins to warm to their straightforward earnestness, yet his revenge rests in killing their beloved grandfather to avenge his mother’s death. The kids quickly take to Gil-dong, for some reason believing in his essential goodness. Dong-yi follows him around like a deputy detective, meticulously noting everything down in her notebook, whereas Mal-soon has figured out Gil-dong’s talent for deception but hilariously almost blows the gang’s cover on several occasions through her total lack of investigatory acumen.

Through investigating his lead on Byung-duk, Gil-dong hopes to recover his own memories of his early life and the mother he only remembers in his nightmares. The path he finds himself on is a dark one leading straight towards a powerful cult populated by fascism fetish sociopaths. Sure that the “New World is Coming”, the cult have planned a large scale event which threatens the lives of most of the residents of a small, strange town. Now Gil-dong has several reasons to get to the bottom of this long standing mystery ranging from his own desire for answers and revenge to saving the lives of these ordinary people and making sure no one else comes under threat.

Taking inspiration from the comic book world, The Phantom Detective makes use of highly saturated color schemes and deliberately artificial looking backgrounds. Though the approach remains bright and colourful for much of the film which adds to its slightly surreal atmosphere, there’s still ample room for noir with faces cast in shadow, light striking glasses so as to eerily block out the eyes, and Gil-dong’s classic detective outfit and occasional weary voiceover. The pulpy plot doesn’t worry too much about internal consistency, but blusters along well enough on its own even if coasting on Gil-dong’s wisecracking tough guy antics as he unexpectedly bonds with the two plucky little girls temporarily in his care. Cute and funny but also filled with innovative action sequences, The Phantom Detective acts as a worthy secondary origin story for its titular hero whose return will be eagerly awaited!