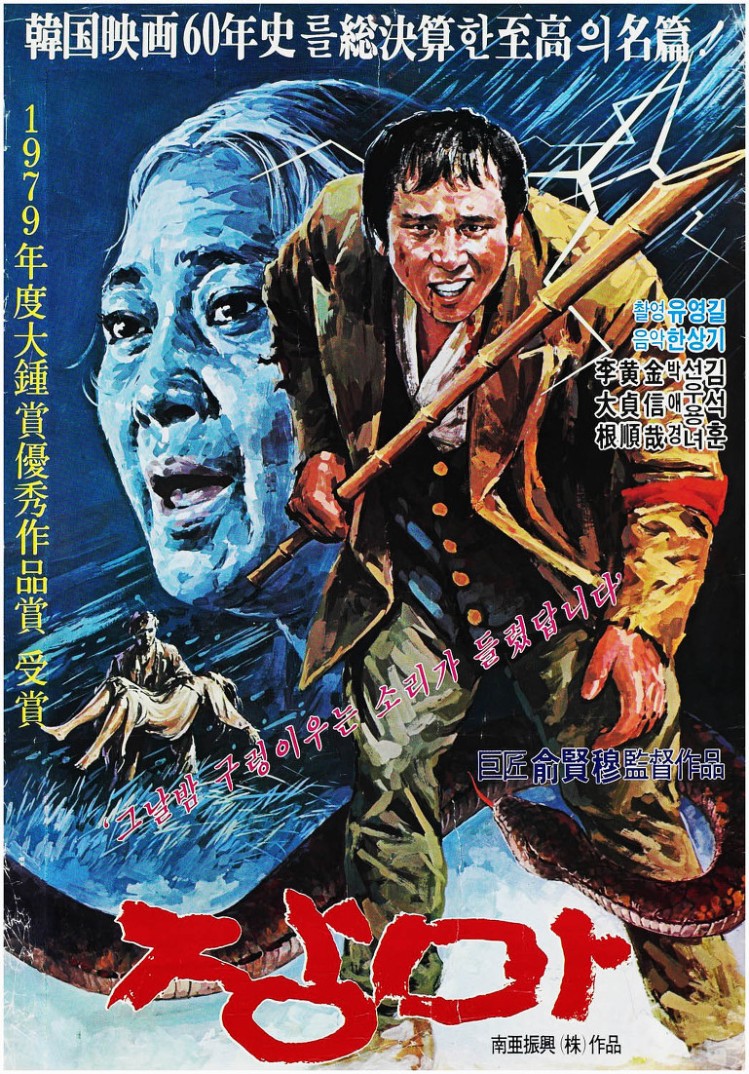 Often regarded as an “intellectual” filmmaker, Aimless Bullet’s Yu Hyun-mok returns to one of his central preoccupations in 1979’s Rainy Days (장마, Jangma). Released close to what would be an abrupt end to the oppressive and authoritarian rule of Park Chung-hee (which would be followed by another repressive military regime), Yu’s literary film falls into the anti-communist subgenre though Yu is careful to reframe his tale not as one of left versus right but of right versus wrong and of the dangerous gulf in-between. As it would in 1979, the political wind shifts without warning and then reverses itself leaving few untouched by the chaos and confusion of a government in flux. Rainy Days is a season of silence and tension, waiting for the sun but weathering a storm which may never end.

In the early 1950s, a family moves from Seoul to stay with relatives including Dongman (Choi Yong-weon) – the grandson of the older woman who is coming to live with her daughter’s family along with her university educated son Giljun (Kang Seuk-woo) and student daughter Gilja (Ju Hae-kyeong). Towards the end of the war, Maternal Grandmother (Hwang Jung-seun) has a prophetic and traumatic dream of trying to pull her own tooth which she interprets as a warning that Giljun, a serving soldier fighting for the South, has been killed in action. Sure enough, the next day a telegram arrives carrying the dreadful news back to the family. Maternal Grandmother tries to comfort herself as best she can, pretending to have grown used to the news thanks to her dream but in reality heartbroken and distraught by the loss of her only son.

Meanwhile, Dongman’s other uncle, the son of Paternal Grandmother (Kim Shin-jae), is off fighting for the North as a communist partisan hiding in the mountains. Suncheol (Lee Dae-geun) was once so kind hearted that as a boy he released the fish he caught in the local river, but when the communists took his village he was quickly seduced by their recently acquired power. While Giljun was forced to hide in a makeshift hollow covered by leaves in the woods, Suncheol was busy getting in with communists and though he claims to want to protect his family eventually informs on his brother-in-law only to find it blowing back on him when they doubt his commitment to the cause in not having turned the “Southern Sympathiser” in sooner. A simple man, Suncheol joins the communists and turns on Giljun as a reaction against his feelings of inferiority in the face of urban sophistication. Suncheol is cheerful and goodhearted, broadly liked by those around him, but he is also like a child who acts on impulse and takes things too far without considering the consequences of his actions just as he does when instigating a little “mob justice” against a villager who had tried to crack down on the trafficking of illegal moonshine much to the consternation of his neighbours.

The central conflict is dramatised by the sparky relationship between the two grandmas who have each passed into the age in which it becomes appropriate to voice one’s concerns openly without particularly caring how those views will be received. Paternal Grandmother, having opened her house to Maternal Grandmother and her children, feels herself to be in a position of superiority and is often wilfully unkind to her guests, offering a series of truly unforgivable words to the bereaved Maternal Grandmother who has, quite reasonably, cursed all the communists who are responsible for the death of her son. Seeing as Paternal Grandmother’s son Suncheol is a communist partisan she takes exception to this which provokes a fierce, accidentally political family row which may be eternally irreparable.

The North is, however, beaten back and the village retaken by the South. Suncheol is now a fugitive hiding in the mountains who has killed many men and fears he will not be forgiven even if he gives himself up to the authorities in the hope of rejoining his family. Proud Paternal Grandmother remains proud of her brave son, refusing to believe what they say about the partisans and secretly hoping for a resurgence of the North though like Maternal Grandmother before her she cannot say these words plainly for fear of getting into trouble with the authorities. When Suncheol makes a brief visit back to the family home, broken and desperate, to float the idea of turning himself in, it has grave consequences for little Dongman who is tricked into to informing on his uncle and earns the wrath of Paternal Grandmother in the process. Maternal Grandmother, however, has had more time to come to terms with her grief and is sympathetic to her grandson’s plight, knowing that he is just a child and did not understand the consequences of his actions.

Focussing tightly on the realistic emotions of the contemporary villagers who hold no particular political views but are caught in the middle of a war and simply trying to survive, Yu dramatises the tragedy of division not in a question of “good” Southerners, and bad “Communists”, but of bereaved grandmothers and broken families, ruined futures and fractured pasts. Yet once again he departs from the tragic ending of the novel for one which allows hope for the future. Little Dongman, put on house arrest by his irritated father, is finally allowed to go out to play with the other village children, rejoicing in the sunny skies and beautiful forrest scenery, returning to a childhood idyll now free of wartime confusion.

By 1967 Korea’s fortunes were beginning to expand. For the young, the future held promise but the nature of that promise was still indistinct. Often considered his masterpiece, 1967’s Mist (안개, Angae, AKA The Foggy Town) was another in the series of literary adaptations for which director Kim Soo-yong had become well known but its avant-garde mise-en-scène and gloomy outlook stand in stark contrast to the heartrending melodramas with which the genre was synonymous. Economic prosperity and superficial success have provoked only emptiness and despair, but a return to source provides little clarity for one harried salaryman lost in the expanding landscape of Korea’s global ambitions.

A poor boy from a remote coastal village, Gi-joon (Shin Seong-il) is now a successful salaryman in the capital where the constant clacking of typewriters, ringing of telephones, and racing of traffic rub at his tired mind. The fact of the matter is Gi-joon is not all that successful – he owes his position to having married the widowed daughter of the CEO. His wife and father-in-law, however, have relatively little faith in his business acumen and so, with the annual shareholders meeting on the horizon, they suggest he get out of the way by paying a visit to his hometown. Gi-joon is not all that happy to be going back, he hated Mujin with its unrelenting fog and general air of existential malaise, but he’s spineless and so he goes, despite himself.

Taking the train, Gi-joon has plenty of time to dwell on his past, literally seeing reflections of his younger self and entering extended flashbacks of memory. Mimicking the stream of consciousness approach of the novel, Gi-joon provides frequent voiceover, introducing his hometown in a less than favourable light as a place which traps its young who yearn to be free of its oppressive boredom. According to the irritated dialogue of two passengers on the bus (which Gi-joon has to take after his lengthy train journey), Mujin is a nothing sort of town where the sea is too shallow for fishing and the fields to narrow for farming, yet the population is large and largely survives on desperation alone, isolated by the oppressive fog that envelops the landscape each and every morning.

Gi-joon characterises the residents of Mujin as petty and materialistic. Having longed to escape, he thought he’d achieved his dreams in Seoul but a trip home forces him to reconsider what it is he’s become. In truth he’s no different from the petty and materialistic villagers he looked down on in their need to look down on each other. Powerlessness has defined his life. As a young man, he resorted to hiding in a cupboard to escape the draft on the orders of his terrified mother and later suffered from weak lungs which made him something of a local laughing stock. Now he’s set for a big promotion in the city but, as his wife reminds him, he wouldn’t even be there if it weren’t for her. Gi-joon’s marriage is one of convenience but it’s clear his wife holds all the cards – a wealthy widow with ambition needs a husband to act as a foil, and a weak willed man like Gi-joon is just the sort to submit himself to her authority in return for the obvious benefits she can offer him. Gi-joon has gained everything he ever dreamed of, but he feels only despair, oppressed by the very system he longed to be a part of.

Back in Mujin his various self delusions are rammed home to him. Trapped once again by the unrelenting fog, he longs to escape from his Seoul life and free himself from the yoke of his marriage and career. Whilst in town he meets up with old friends who introduce him to recent arrival Ha In-sook ( Yoon Jeong-hee) – an opera student turned music teacher who has joined the local school. In-sook is by far the most exciting thing in the extremely boring town, but Gi-joon is worried he’s stepped into the middle of something when he realises his old friend, Park, now a teacher, has a crush on In-sook while another old friend, Cho, now a status obsessed tax inspector, may also have marital designs.

Gi-joon didn’t need to worry about the tax inspector – as it turns out, he thinks he can do better than a mere music teacher and plans to marry up, much like Gi-joon has. Gi-joon bristles slightly at this, as he does to Cho’s lewd story about how he trapped In-sook on an overnight trip and planned to have a fling with her but she managed to get away (much to Gi-joon’s relief). Back home Gi-joon sees reflections of himself everywhere and particularly doesn’t like this alignment of himself with the ugly ambition of men like Cho who only want to lord it over their former friends. More flatteringly he sees his younger self in the depressed, conflicted In-sook who is already going half mad in the stultifying rural town and longs to go back to Seoul. Despite mild qualms about his friends’ feelings, Gi-joon finds himself bonding with the melancholy young woman who again forces him to see himself the way he really is rather than as the idealised personality he’d constructed for himself as a successful Seoul salaryman.

Bonding in their existential loneliness, the two eventually embark on a tender if melancholy affair which, despite their protestations to the contrary, is built on self delusions if not exactly on lies. Gi-joon intends to take In-sook to Seoul, but he won’t, and In-sook knows she won’t leave even if she wants to believe in the possibility of rescue. The world for them is as foggy and indistinct as the mists around the beaches of Mujin. Filled with emptiness and despair, they remain adrift in the post-war society unable to accept the soulless compromises of conventionality but finding no escape from their self imposed prisons.