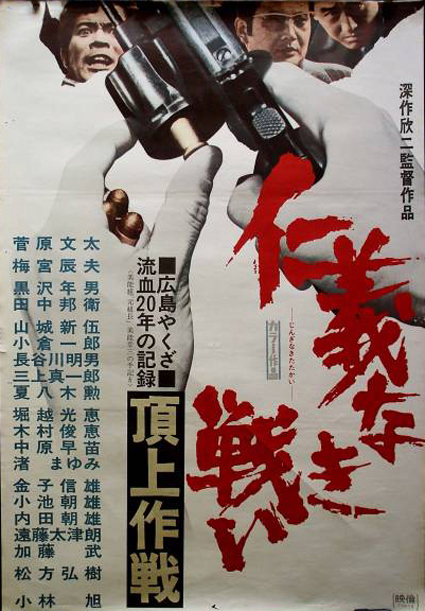 It’s 1963 now and the chaos in the yakuza world is only increasing. However, with the Tokyo olympics only a year away and the economic conditions considerably improved the outlaw life is much less justifiable. The public are becoming increasingly intolerant of yakuza violence and the government is keen to clean up their image before the tourists arrive and so the police finally decide to do something about the organised crime problem. This is bad news for Hirono and his guys who are already still in the middle of their own yakuza style cold war.

Police Tactics (仁義なき戦い: 頂上作戦, Jingi Naki Tatakai: Chojo Sakusen), the fourth in the Yakuza Papers (or Battles Without Honour and Humanity) series, once again places Hirono at the centre of events for much of the film. The cold war from the end of the last film, Proxy War, is still going on with ambitious boss Takeda hosting additional foot soldiers from other areas of the country. However, all these extra guys are quite a drain on his resources and, simply put, it’s going to ruin him if this situation goes on much longer. Yamamori is currently holed up in a safe place and only steps outside to go to the bath house when he’s surrounded by a huge entourage of bodyguards. Added to the gang rivalry which is only growing now as factions split and new families are formed, not to mention all the guys from outside, is the now constant police pressure. Up to now, the police have been either a minor irritation or a soft ally but this time the guys might have finally met their match.

It’s almost twenty years since Hirono settled into the yakuza life. He’s not an old man, but he’s not a young one either. You can no longer explain or excuse any of his actions with the fire of youth – he’s one of the veterans now. However, young men are always young men and even while the older guys try to scheme and come up with a plan the youngsters are all for action. Hirono has always been the one noble gangster. Committed to yakuza ideals, he’s loyal to his bosses and dedicated to taking care of his guys. Hence, there’s no way he’s going to let one of his men take out Yamamori – firstly, after nursing a grudge for 18 years he wants to handle it himself but even if he didn’t he still wouldn’t be able go after Yamamori in anything other than an honourable way. However, now even Hirono says at one point “I don’t give a fucking shit about honour anymore”. At this point you know it’s all over, the one loyal retainer has finally given up.

With the police pressure mounting, the violence on the streets intensifies with even more feats of desperate backstreets warfare. Hirono himself is absent for a lot of the film while he gets picked up by the police on a flimsy pretext. More gangs are introduced, more guys die before you even begin to remember their names. There’s death everywhere yet still more yakuza keep turning up, offering to die for their bosses who will sell them out without a second thought if it buys them ten seconds more in power. The younger generation may not have the trauma of the war to burn through, but they’ve grown up in this world of street gangs and constant violence so it stands to reason that they come to idolise the tough guys and think joining a gang is their one way ticket out of the slums. As they will discover, there is always a heavy price to be paid for ambition and naivety.

The shooting style is pretty much the same as the first few films in the series. Documentary style voice over, hand held camera and freeze frame death shots are the order of the day. Once again we begin and end with the ruined dome reminding us of the price of violence. Police Tactics could almost be the end of the cycle. With the police finally deciding to act, by the end of the film all of the major players are off the streets in one way or another. In the end, all that death and violence amounted to to nothing. As the film reminds us, public order may have been restored (temporarily) but the systems and conditions which lead to violence are still very much in place.

Police Tactics is available on blu-ray in the UK as part of Arrow Video’s Battles Without Honour and Humanity: The Complete Collection box set.