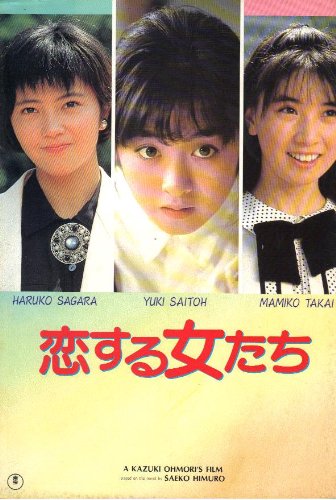 The friends you make in high school are the friends you’ll have the rest of your life, says Takako – the heroine of Kazuki Omori’s Young Girls in Love (恋する女たち, Koisuru Onnatachi). Only she doesn’t quite want hers – they’re weird and cause her nothing but trouble. Also one of them is too pretty so she soaks up all of the attention – where’s the fun in that? Takako is not altogether happy in her adolescence but at least she has her friends there beside her, right?

Takako’s two best friends have both recently fallen in love leaving her feeling a little left out. Midoriko (Mamiko Takai), the most “unusual” girl in her group (but also thought to be the prettiest), had fallen in love with a teacher and even struck up something of a friendship with him as evidenced by her collection of cute photos of them together. However, he’s recently got married leaving her heartbroken so Midoriko is having another one of her trademark “funerals” in which she buries painful memories from her past. Previously she’s had funerals for an unfortunate PE related incident in which she ripped her shorts during gymnastics, and another for when her grades got so bad that the teachers told her she probably wouldn’t graduate from high school.

Teiko has a difficult homelife as her literature professor father has left the family for unspecified reasons and her mother is still mourning the end of the marriage. However, she has found herself and older poet who formerly wrote lyrics for cheesy teen idol pop songs (though he’s a serious poet now so that’s all beneath and behind him). Teiko knows that this relationship is doomed to failure but is pursuing it in any case.

Takako is so wound up by her friend’s series of love stories that she finds herself visiting “raunchy” movies like 9 1/2 weeks. This is where she encounters possible crush and high school baseball star Kutsukake (Toshiro Yanagiba), but does she really like him or is she just lovesick and jealous of her friends? A new complication also arises in the form of fellow student Kanzake (Yusuke Kawazu) who previously had a crush on older sister Hiroko (Kiwako Harada) but seems to have shifted his attentions on to Takako.

Young Girls in Love is a little broader than the average idol drama though it maintains an overall quirky tone with a few swings towards melodrama. Takako continues with her romantic dilemma although in contrast to what she says towards the opening of the film she mostly does so alone. Rather than her similarly romantically troubled friends, Takako confides in a painter friend, Kinuko (Satomi Kobayashi) who has some rather more grown up advice for her than other friends (or sister) are willing or able to offer.

During her troubles Takako also goes to visit another girl who is kind of involved with low level bosozoku motorcycle gangs, and finds out that her morbid friend Midoriko has gone seriously off the rails. Leading some kind of double life, Midoriko is a disco queen in another town, dancing her troubles away and enchanting all the boys in the club (including the other girl’s biker boyfriend). Distressed, yet a little envious of Midoriko’s ability to soak up all the attention for herself, Takako is the only one to try and intervene during a drag race duel though little heed is given to her desperate plea for sanity and she is only one that gets hurt during the proceedings.

It’s all fairly innocent stuff even though biker gangs, older boyfriends, and boyfriend stealing, all fall into the mix. Omori keeps things simple and brings his idols to the fore to do what they do best though he does overly rely on TV style reaction shots for some of his gags. According to the anecdote Takako offers at the end, none of the various love stories have worked out they way the girls hoped (at least for now) but everything carries on more or less as normal. The three girls have another of their traditional extreme tea ceremonies dressed in kimono and sitting on the edge of a cliff, but they’re all still together despite their recent romantic adventures. The real love story is between three childhood friends who may have temporarily drifted apart over teenage drama, but their bonds are strong enough to withstand the storm and, as Takako stated in the beginning of the film, they’ll be together for the rest of their lives.