Written by Hayley ScanlonPosted on January 12, 2017Leave a comment 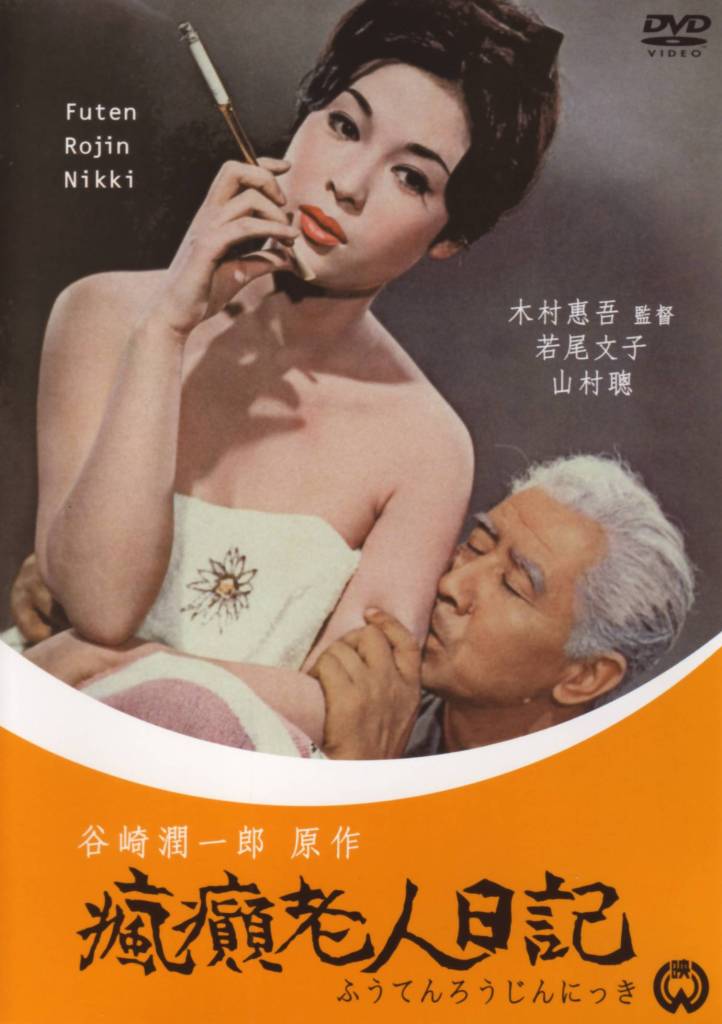 Junichiro Tanizaki is giant of Japanese literature whose work has often been adapted for the screen with Manji alone receiving four different filmic treatments between 1964 and 2006. His often erotic themes tallied nicely with those of the director of the 1964 version, Yasuzo Masumura who also adapted Tanizaki’s The Tattooist under the title of Irezumi, both of which starred Masumura’s muse Ayako Wakao. Preceding both of these, Keigo Kimura’s Diary of a Mad Old Man (瘋癲老人日記, Futen Rojin Nikki) adapts a late, and at that time extremely recent, work by Tanizaki which again drew some inspiration from his own life as it explores the frustrated sexuality of an older man facing partial paralysis following a stroke. Once again employing Wakao as a genial femme fatale, Kimura’s film is a broadly comic tale of an old man’s folly, neatly undercutting its darker themes with naturalistic humour and late life melancholy.

Tanazaki’s stand in is a wealthy old man, Utsugi (So Yamamura), who has recently suffered a stroke which has paralysed his right hand and significantly reduced his quality of life. He currently operates a large household with a number of live-in staff, including a round the clock nurse, his wife, son, daughter-in-law, and grandson. The son, Joukichi (Keizo Kawasaki), is a successful executive currently having an affair with a cabaret dancer, leaving his extremely beautiful wife, Sachiko (Ayako Wakao), herself also formerly a dancer, at a loose end. Though approaching the end of his life and possibly physically incapable of acting on his desire, Utsugi is consumed with lust for Sachiko and thinks of little else but how to convince her to allow him even the smallest of intimacies. Sachiko, for her part, is not particularly interested in pursuing a romantic entanglement with her aged father-in-law but is perfectly aware of her power over him which she uses to fulfil her material desires. Meanwhile, Utsugi’s rather pathetic behaviour has not gone unnoticed by the rest of the household who view his desperation with a mix of pity, exasperation, and outrage.

Kimura’s film takes more of an objective view than the subjective quality of the title would suggest but still treats its protagonist with a degree of well intentioned sympathy for a man realising he’s reached the final stages of his life. Utsugi’s sexual desire intensifies even as his body betrays him but this very life force becomes his rebellion against the encroaching onset of decay as he clings to his virility, trying to off-set the inevitable. As such, conquest of Sachiko becomes his last dying quest for which he is willing to sacrifice anything, undergo any kind of degradation, simply to climb one rung on the ladder towards an eventual consummation of his desires.

Sachiko, instinctively disliked by her mother-in-law, is more than a match for Utsugi’s finagling. A young, confident, and beautiful woman, Sachiko has learned how to do as she pleases without needing permission from anyone for anything. In this, the pair are alike – both completely self aware yet also in full knowledge of those around them. The strange arrangement they’ve developed is a game of reciprocal gift giving which is less a war than a playful exercise in which both are perfectly aware of the rules and outcomes. Sachiko allows Utsugi certain privileges beginning with slightly patronising flirtation leading to leaving the bathroom door unlocked when she showers (behind a curtain) and permitting Utsugi to kiss and fondle her leg (even if she hoses it down, complaining it feels like being licked by a slug).

Tanizaki’s strange fetish is again in evidence as Utsugi finally deifies Sachiko in creating a print of the sole of her foot which he intends to have carved into his grave so he can live protected beneath her forever, as insects are under the foot of Buddha. This final act which takes the place of a literal consummation goes some way towards easing his desire but may also be the one which pushes him towards the grave he was seeking to avoid. Notably, Sachiko is bored and eventually exhausted by the entire enterprise even whilst Utsugi is caught in the throws of his dangerous ecstasy.

Other members of the household view the continuing interaction of Sachiko and Utsugi with bemusement, pitying and resenting the old man for his foolishness whilst half-admiring, half disapproving of Sachiko’s manipulation of his desires. Utsugi had been a stingy man despite his wealth and even now risks discord within his own family by refusing to assist his grown-up daughter who finds herself in financial difficulty and in need of familial support, yet lavishing vast sums on Sachiko for expensive trinkets even as she continues an affair with a younger man right under his nose. Still, Sachiko uses what she has and gets what she wants and Utsugi attempts to do the same only less successfully, completely self aware of his foolishness and the low probability of success yet buoyed with each tiny concession Sachiko affords him. A wry and unforgiving exploration of the link between sex and death, Diary of a Mad Old Man undercuts the less savoury elements of its source material with a broadly humorous, mocking tone gradually giving way to melancholy as the old man begins to accept his own impotence, the light around him dwindling while Sachiko’s only brightens.