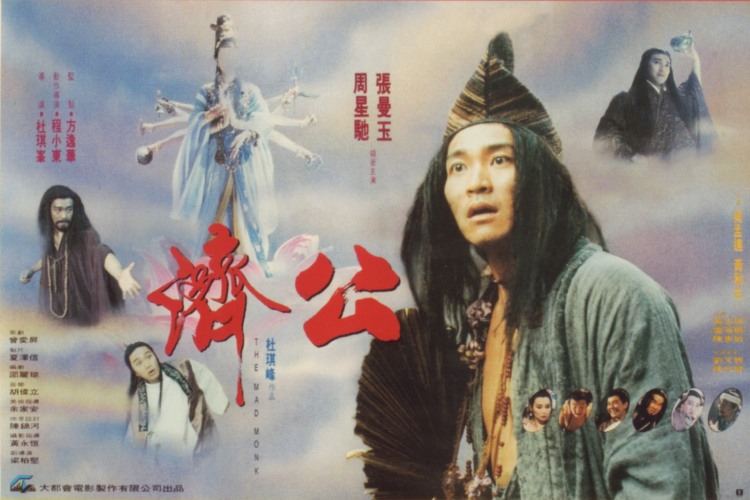 “The Mad Monk” sounds like a great name for a creepy ghost, emerging robed and chanting from the shadows to make you fear for your mortal soul. Sadly, The Mad Monk (濟公, Jì Gōng) features only one “ghost”, but it might just be the cutest in cinema history. The second of Johnnie To’s Shaw Brothers collaborations with comedy star Stephen Chow is another wisecracking romp in which Chow revels in his smart alec superiority, settling bets made in heaven and eventually vowing to spread peace and love across the whole world.

Dragon Fighter Lo Han (Stephen Chow) has a low opinion of his fellow celestial beings. He thinks they ought to be taking more of an interest rather than blindly following the rules. Consequently, Lo Has been making all kinds of mischief and the other gods are very annoyed. They’ve appealed to their high arbitrator – the goddess of mercy (Anita Mui). Wisecraking Lo Han first tries to fob the gods off by sending his friend, Tiger Fighter (Ng Man-tat), instead but can’t resist offering a few more words of smugness in his own defence. Nevertheless, the goddess sees something in Lo Han’s argument and, rather than condemn him to a life as an animal, sets him a challenge – go to Earth and change the fates of three people whose destinies are set to remain the same for the next nine lives. Lo Han agrees and the “Mad Monk” is born.

Like Justice, My Foot, Mad Monk is an opportunity for Chow to show off his verbal dexterity with occasional forays into martial arts. Sadly much of the fast and furious dialogue does not translate though Chow’s spirited performance helps to breathe life into the comedy. Slightly less forgivably, To and Chow repeat jokes from the earlier film including one odd, very much of its time sequence in which Chow walks in on two gay men enjoying a banana in the privacy of their own room. Other attempts at long running jokes include Tiger’s metamorphosis into a giant baby which soon becomes tiring but is eventually forgotten.

Lo Han’s mission is to “reform” a prostitute (Maggie Cheung) who enjoys her work too much, a beggar (Anthony Wong ) with social anxiety and low self esteem, and a stone hearted villain (Kirk Wong) intent on inflicting as much evil as possible on the Mad Monk and his cohorts. Whilst living as a mortal, Lo Han is not allowed to use any of his celestial magic, but is given a magic fan which can be used three times a day. The goddess of mercy instructs Lo Han that he is to use his sincerity to convert these dyed in the wool sinners, which he does – descending to Earth in an oddly Christlike fashion, determined to save these lost souls even if he’s doing it for the pleasure of winning a bet more than an altruistic desire to help “troubled” people back onto what he sees as “the right path”.

Like many Shaw Brothers comedies, Mad Monk’s narrative is its least important element. The nonsensical plot races from one random incident to another, glued together with over the top slapstick and the occasional martial arts showdown. By the end, Lo Han has wound up in a monster movie as he tries to stop a giant marauding spirit from destroying the city even though he is running out of time for his personal quest and currently has other pressing concerns. Lo Han’s “sincere” attempts to manipulate his targets into changing their ways may seem as if they fail, but even if the effects will be felt in the next life rather than this one, Lo Han has made difference in the mortal world, albeit not quite the one he expected. Seemingly out of nowhere, Lo Han’s mission seems to have changed him too as he begins extolling the virtues of compassion and insisting on building another paradise to spread peace and love through the world. Like the film itself, it’s a noble cause but one that sadly never hits its mark.