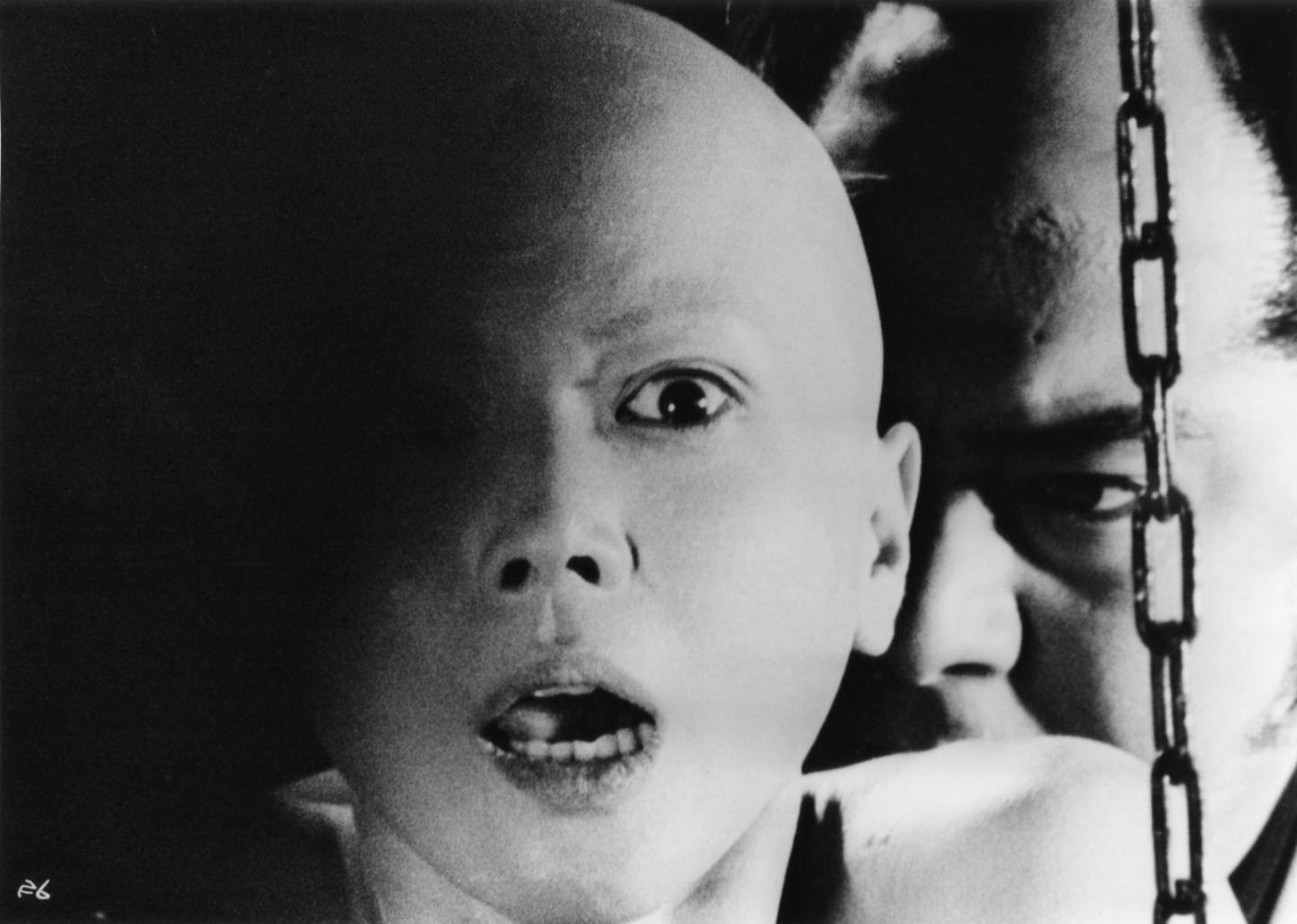 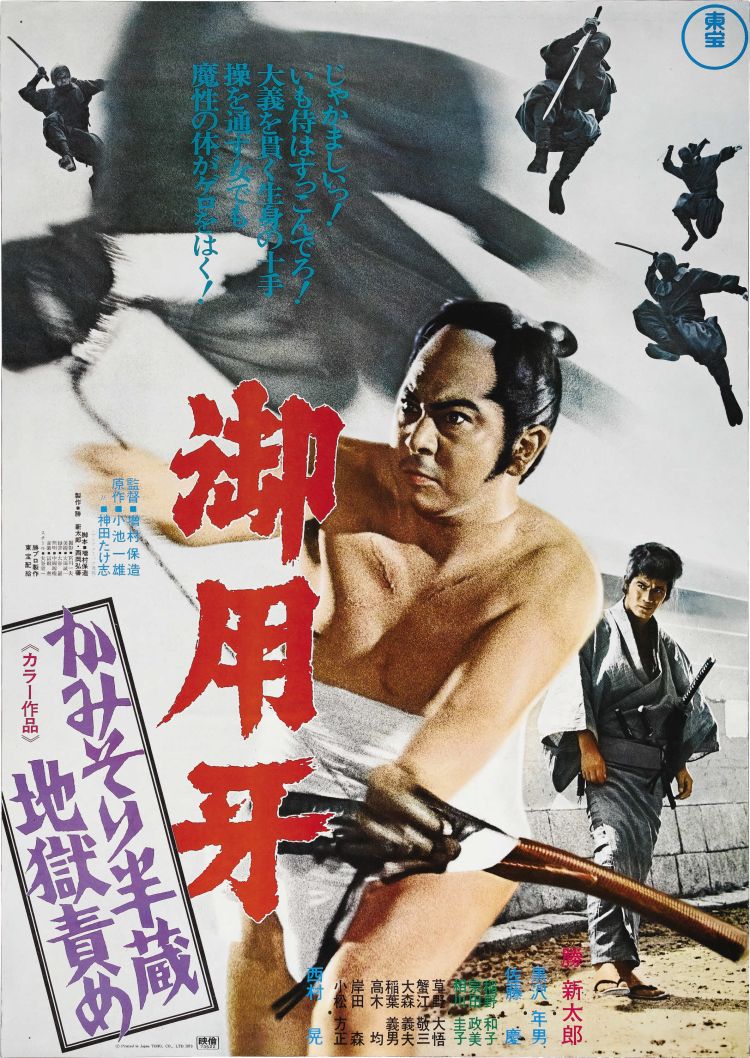 Yasuzo Masumura had spent the majority of his career at Daiei, but following the studio’s bankruptcy, he found himself out on his own as a freelance director for hire. That is perhaps how he came to direct this improbable entry in his filmography on the second of a trilogy of exploitation leading jidaigeki films for Toho. Essentially a vanity project for former Zatoichi star Shintaro Katsu who both produces and stars in the series, Hanzo the Razor: The Snare (御用牙 かみそり半蔵地獄責め , Goyokiba: Kamisori Hanzo Jigoku Zeme) is another tale of the well endowed hero of the Edo era protecting ordinary people from elite corruption, but Masumura, providing the script himself, bends it to his own will whilst maintaining the essential house style.

Hanzo (Shintaro Katsu) chases a pair of crooks right into the path of treasury officer Okubo. As expected, the lord and his retainers kick off but Hanzo won’t back down, shouting loudly about honour and justice much to his lord’s displeasure. Eventually Hanzo takes the two crooks into custody and they tell him exactly what’s happened to them this evening – they snuck over from the next village to steal some rice from the watermill but they found a dead girl in there and so they were running away in terror. Hanzo investigates and finds the partially clothed body still lying in the mill untouched but when he takes a closer look it seems the girl wasn’t exactly murdered but has died all alone after a botched abortion. Realising she smells of the incense from a local temple, Hanzo gets on the case but once again ends up uncovering a large scale government conspiracy.

Though it might not immediately seem so, Masumura’s key themes are a perfect fit for the world of Hanzo. In his early contemporary films such as Giants & Toys and Black Test Car, Masumura had painted a grim view of post-war society in which systemic corruption, personal greed, and selfishness had destroyed any possibility of well functioning human relationships. It was Masumura’s belief that true freedom and individuality was not possible within a conformist society such as Japan’s but this need for personal expression was possible through sexuality. Sex is both a need and a trap as Masumura’s (often) heroines chase their freedom through what essentially amounts to an illicit secret, using and manipulating the men around them in order to improve their otherwise dire lack of agency.

Hanzo’s investigation takes him into an oddly female world of intrigue in which a buddhist nun has been duped into becoming a middle-woman in a government backed scheme pimping innocent local girls to the highest bidder among a gang of wealthy local merchants. Hanzo berates the parents of the murdered girl for not having kept a better eye on her, but these misused women are left with no other recourse than the shady protection of others inhabiting the same world of corrupt transactions such as the local shamaness who has developed a “new method of abortion” just as Hanzo has developed a “new method of torture” which involves a bizarrely sexualised ritual in which both parties must be fully naked before she enacts penetration with her various instruments. Hanzo first tries more usual torture methods on the nun before indulging in his trademark tactic of trapping her in a net to be raised and lowered onto his oversize penis which he keeps in top notch by beating it with a stick and ramming it into a bag of rough uncooked rice.

Unlike the first film, the women are less ready to fall for Hanzo’s giant member. The nun complains loudly that her Buddhist vows of chastity are being violated while Hanzo’s later rape of the woman who runs the local mint is a much more violent affair. Hanzo grapples with her legs as she struggles, gasping as he opens his loincloth and reveals his surprisingly large appendage, once again playing into the fallacy that all women harbour some kind of rape fantasy. Hanzo has done this, he claims, to “calm her down”, because he could sense her sexual frustration and desperate need for male contact. To be fair to Hanzo, he does appear to be correct in his reading of the woman’s behaviour as she sheds her anxiety and becomes a firm devotee of the cult of Hanzo.

Meanwhile, political concerns bubble in the background as the main conspiracy revolves around consistent currency devaluations which are placing a stranglehold on the fortunes of the poor while their overlords, who are supposed to be protecting them, spend vast sums on claiming the virginity of innocent young girls. Hanzo may be a rapist himself (though he makes it clear that he derives no pleasure from his actions and only gives pleasure to the women involved), but he draws the line at the misuse of innocents, saving a little girl about to be violated by the master criminal Hamajima (Kei Sato) in a daring confrontation in which he boldly brings his own coffin, just in case.

Masumura broadly sticks to the Toho house style, but gone is the camp comedy of the first instalment with its giggly gossipers and humorous shots of Hanzo’s permanently erect penis. Instead he opts for an increase in sleazy voyeurism, filling the screen with female nudity whilst neatly implicating the male audience who enjoy such objectification by shooting from secretive angles as his collection of dirty old men crowd round a two way mirror to watch the lucky winner torture and abuse the soft young flesh they’ve just been bidding on. Like Sword of Justice, The Snare also ends with a slightly extraneous coda in which Hanzo settles a dispute with another official by means of a duel he would rather not have fought. Walking off bravely into the darkness, Hanzo utters only the word “idiot” for a man who wasted his life on petty samurai pride. Hanzo has better things to do, protecting the common man from just such men who place hypocritical ideas of pride and honour above general human decency in their need for domination through fear and violence over his own tenet of unrestrained pleasure.