Written by Hayley ScanlonPosted on December 28, 2019 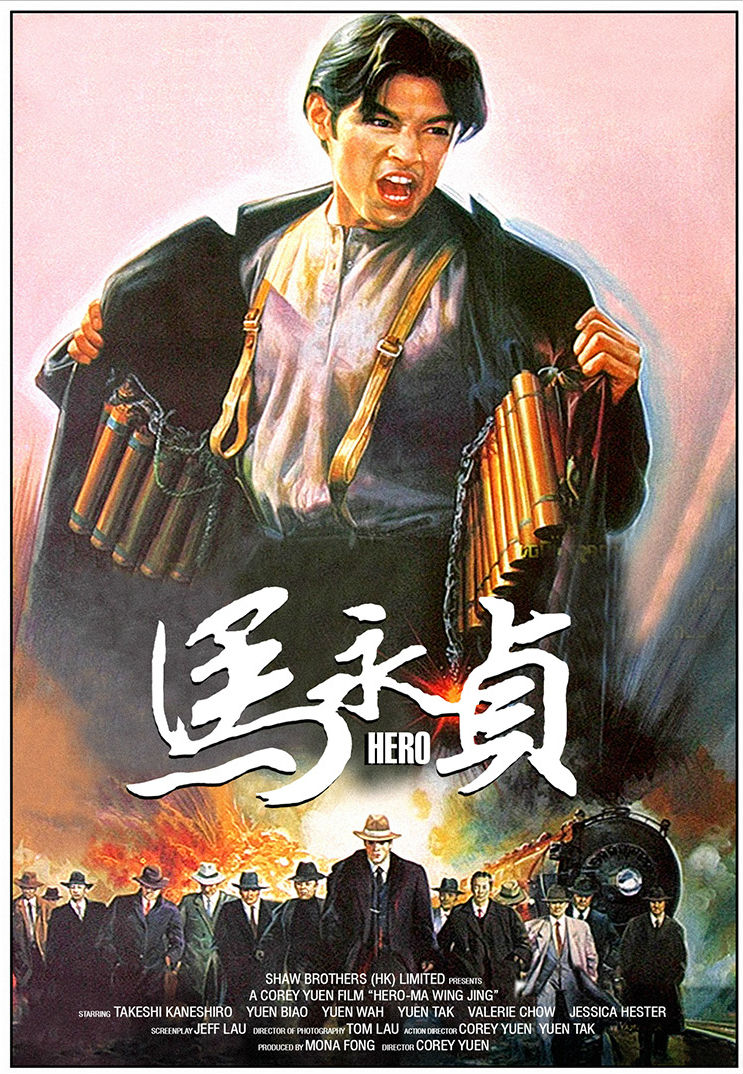 It’s an old ‘un but a good un. Young gun from the country hits the city, decides to do things his own way, becomes the top dog but loses himself in the process and is then faced with a choice between his better nature and potential gains. Corey Yuen’s remake of the Shaw Brothers classic Boxer from Shantung, Hero (馬永貞, Ma Wing Jing), stars Taiwanese heartthrob Takeshi Kaneshiro in his first big action lead as the titular good guy who nevertheless finds himself wavering under the oppressive skies of turn of the century Shanghai.

Ma Wing Jing (Takeshi Kaneshiro) and his brother Tai Cheung (Yuen Wah) have left their old country home to seek their fortunes in the city following a devastating drought. The Shanghai International Settlement, nominally under the control of the British, was a bustling, international port city but also lawless place where gangsters ruled – Tam Sei (Yuen Biao), who is supported by the Brits, controls half the territory with his rival Yang Shuang (Yuen Ta), backed by the local police, taking the rest. The Ma brothers hoped to make something of themselves in the brave new world of Shanghai but are simply two of thousands of refugees fleeing famine and can only find dock work where they are exploited and treated poorly.

Their fortunes pick up, however, when Wing Jing gets an early opportunity to show off his hero qualifications by saving Tam from certain death during an ambush. Tam, grateful, somewhat humiliates Wing Jing by forcing him to bend for a silver dollar before berating him for doing it but the pair eventually bond in a good old fashioned fist fight. Tam offers him a job, but Wing Jing has learned his lesson – he’ll be his own man and make his own name.

A melancholy love story plays in the background behind the otherwise macho dynamics. Arriving at Tam’s saloon, Wing Jing falls in love at first sight with the beautiful singer, Ling-tze (Jessica Hsuan), but is unable to pursue his romance with her thanks to his brotherly debt to Tam, who is in love with the bar’s landlady, Yam (Valerie Chow), but has broken things off because the of precariousness of his gangster lifestyle. Tam disappears for a bit, leaving the bar and his territory to Wing Jing, but doesn’t bank on Yam’s machinations as she gets rid of Ling-tze and takes up with Wing Jing while working with Yang on an evil plan that turns out to be a weird way of protecting her one true love.

Nevertheless, Wing Jing takes centre stage as he quickly climbs the local tree and becomes the big guy in town, little realising that his bravado has irked just about everyone in sight – he’s not only made himself a target for Yang but for the local Chinese police while Tam’s old associations with the British can’t be counted on forever. Yang, ironically enough, is playing divide and conquer but Wing Jing is too naive to see and too hotheaded to listen to Tam’s advice even when he returns to offer it.

Then again, a hero is a hero through and through and so it’s not long before Wing Jing’s moral goodness begins to resurface and he realises where his loyalties really lie. Given that Hero is a Hong Kong production released in 1997, perhaps it’s less surprising that the good guys are the ones backed by the British rather than local law enforcement which is, of course, deeply corrupt and and immersed in Yang’s world of internecine scheming. Still, this Shanghai is one of scrapping poor boys fighting for freedom from oppression (if accidentally veering into the role of oppressor in the process) much more than it is about international politics or the or the increasingly global milieu of the late 19th century city and its position as the gateway to the East for an avaricious Europe.

Mixing classic Shaw Brothers style with a modern New Wave edge, Yuen gives Kaneshiro his time to shine as an ultra cool action hero complete with a series of hugely impressive action sequences culminating in a fantastically satisfying final shoot out where blood and brotherhood take centre stage. But there can be no winners in this world of betrayals and counter betrayals, and so our Hero may have to leave it behind for pastures new as he takes his heroism with him into a hopefully better future.

Currently available to stream on Netflix in the UK and possibly other territories.