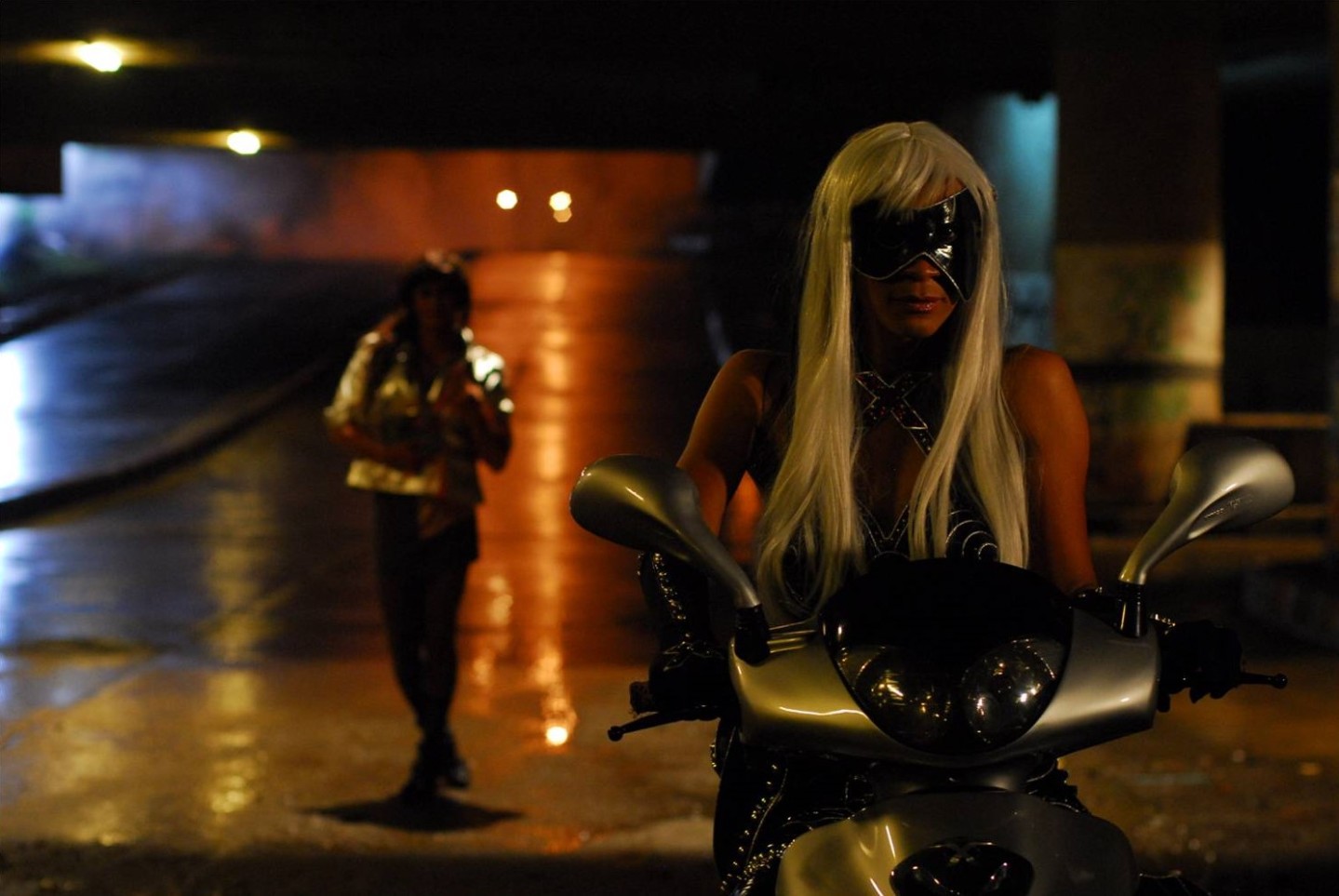 “With the force of rainbows I will punish you all” transgender superhero Madame X exclaims as she takes on bigotry and self-interest to fight for human rights in a largely oppressive social culture. Despite emerging from long years of authoritarian military dictatorship in 1998, Indonesia’s LBGTQ+ community finds itself in a marginalised position with homosexuality still taboo and illegal under religious law in certain parts of the country. Lucky Kuswandi’s high camp, pure punk tale of a transwoman embracing her inner power to claim her place in society while standing up against intolerance is a bold advocation for a more compassionate world but also a whole lot of anarchic fun.

It’s transgender hairdresser Adam’s (Amink) birthday and unbeknownst to her, her life is about to change. A mysterious client arriving at the salon warns her that she shouldn’t go dancing because there’s a kind of dance so dangerous it might end her life. Adam ignores her and goes anyway but is set up by her awful boyfriend and captured by anti-gay vigilante group Bogem who bundle all the transwomen in the place into their pickup truck for “recycling”. During the journey, Adam’s best friend Aline (Joko Anwar) is killed by Bogem leader Storm who turns out to be the head of the National Morality Front, a political party denying any ties to far right violence. Taken in by an LGBTQ+ friendly Lenggok dance studio in the dreamily named village Beyond the Clouds, Adam struggles to rebuild her life but receives a new mission when Aline appears to her in angelic form and demands vengeance.

“There’s no place for us in the real world” Adam explains at the bar when a potential client asks what a nice girl like her is doing in a place like this, telling him that there are no “normal” jobs for women like her and so she has no other option than to make ends meet through sex work. Bogem refers to the transwomen as “trash”, as if they’re cleaning up the city while touting magnanimity in their intention to “recycle” them so they can be returned to mainstream society as “normal” men. Despite having three wives, their identities hidden by their colour-coded burkas, Storm preaches old fashioned family values but later is revealed to have ties to human trafficking mediated through Tarjo (Ikhsan Himawan), a local man continually dressed like a religious leader who himself is hiding an aspect of his sexuality from his sweet and innocent fiancée Ratih (Saira Jihan) whom he has convinced to give up her career as a lenggok dancer to become a “migrant worker”.

Lenggok, a traditional Indonesian dance, turns out to be the one that the mysterious woman said would end Adam’s life which is one reason she was reluctant to take it up, but only because the way former military instructor Uncle Radi (Robby Tumewu) is teaching it is really a martial art. Radi is himself in a happy longterm relationship with trans woman Auntie Yantje (Ria Irawan) who now uses a wheelchair because the strain of living has taken such a profound toll on her health as she and Radi attempted to stand up to injustice. With the help of mute servant Din (Vincent Ryan Rompies), they’ve built a secret base behind their bedroom filled with amazing gadgets made out of cosmetics and accessories, as well as a beautifully designed superhero suit just waiting for a hero. Adam can only embrace her destiny as Madame X by first accepting her national legacy in Lenggok dance, along with her identity as a transwoman and the trauma of her first love.

Told in flashback, the melancholy story of Adam and Harun becomes a point origin in the tragedy of love destroyed by oppressive patriarchal authority. “You’re the one ruining my son” Harun’s father claims before literally scarring his own boy and leaving him with an internalised homophobia which encourages him to blame Adam for arousing in him such taboo desires. Yet Adam fights back with the tools used against her, vanquishing her foes with the power of the rainbow. Rich with pop culture references from the Bond-esque opening titles to a Sailor Moon meets Wonder Woman transformation scene imbued with its own particular irony, Madame X is an anarchic tale of high camp hijinks but also a heartfelt origin story for a transgender superwoman claiming her space and standing up for the oppressed in an increasingly hostile environment.

Madame X screened as part of this year’s Queer East.