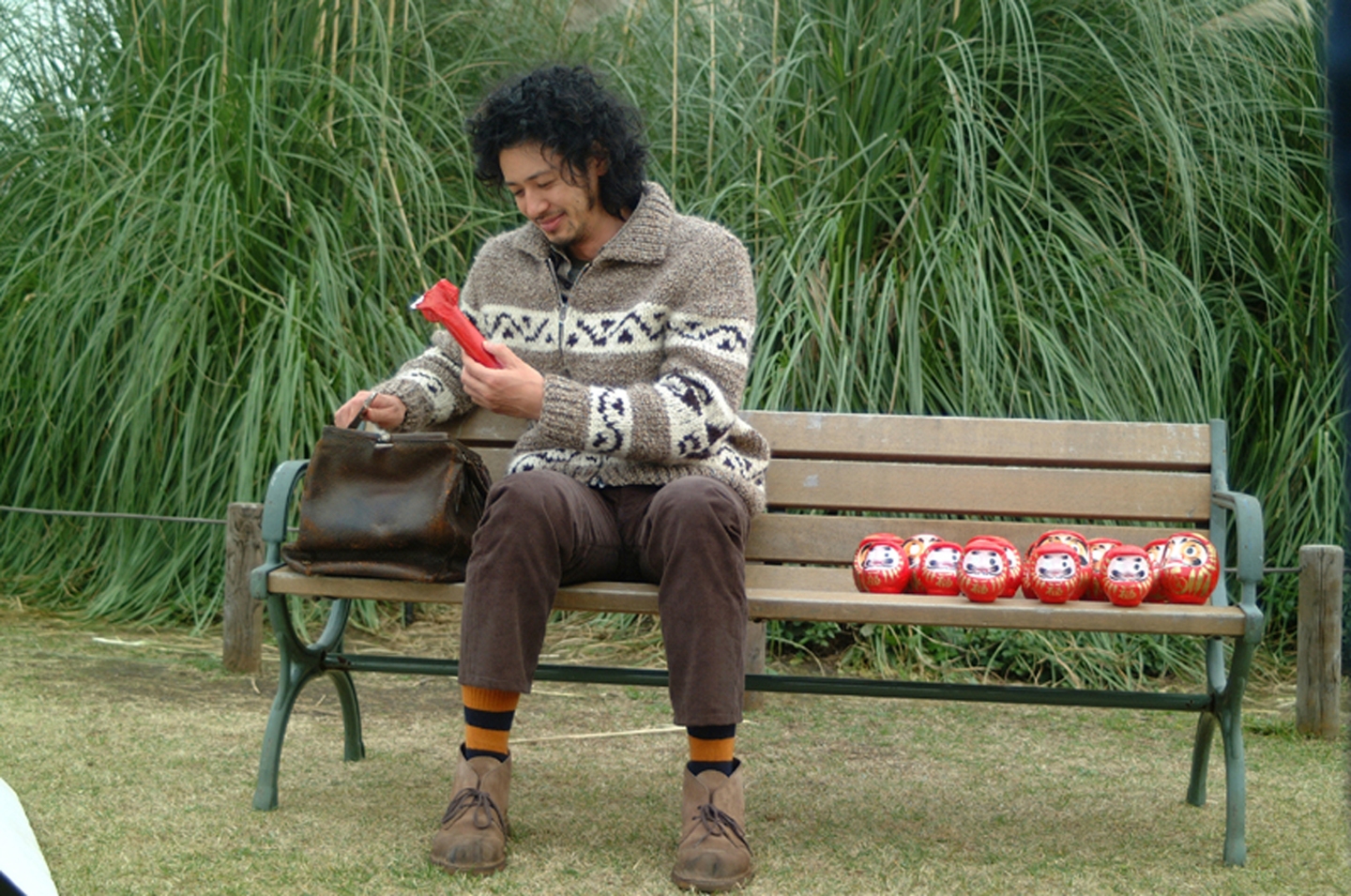 An aimless young man finds unexpected direction while walking the streets of the city with an unlikely father figure in Satoshi Miki’s meandering dramedy Adrift in Tokyo (転々, Tenten). These two men are indeed adrift in more ways than the literal, each without connections and seeking a concrete role in life while attempting to make peace with the past. But like any father and son there comes a time when they must part and their journey does indeed have a destination, one which it seems cannot be altered however much they might wish to delay it.

That Fumiya (Joe Odagiri) is aimless might be assumed from his unruly hair and the fact that he thinks tricolour toothpaste might be enough to jolt him out of his sense of despair but is confirmed by his matter of fact statement that he’s in his eighth year of university where nominally at least he’s studying law. His problem is that he’s amassed massive debts to a loanshark, Fukuhara (Tomokazu Miura), who breaks into his apartment and threatens him by shoving a sock in his mouth before leaving with his ID and driving licence. Fukuhara, however, later decides to make him another offer that he will cancel the debt and even give Fumiya even more money if only he will agree to wander around Tokyo with him for an unspecified time until they reach Kasumigaseki where he intends to hand himself in at police headquarters claiming to have recently murdered his wife.

Like many things that Fukuhara says, it’s not clear whether or not he has indeed killed his wife though Miki frequently switches back to a scene of a woman who seems to have passed away and has been laid out in bed though she shows no signs of having died violently. Her zany co-workers keep thinking they should check on her seeing as she hasn’t shown up in days but something always distracts them and they end up forgetting about her entirely. The body appears to have been treated with love, hinting that if what Fukuhara says is true and this woman was his wife whom he killed in a fit of passion he has quite clearly thought through his plan of action rather than attempting to flee the scene and is perhaps only delaying the inevitable while walking out some other trauma in the company of Fumiya a surrogate son mirroring the description he gives of taking walks in the company first of his father and then of his wife.

Fumiya deflects every question and agrees that he hates memories having burned his photo albums before leaving for university. He claims that he has no parents, describing the people who raised him as just that, as his mother and father both abandoned him as a child leaving him in a perpetual state of arrest which is one reason he’s still a student four years after most people have graduated. He never went to the zoo or rode a rollercoaster or called a man dad and seems to think of himself as nothing much of anything at all. Yet the fake can sometimes be more real than the real as he eventually discovers becoming part of an awkward family unit with Fukuhara’s “fake” wife (Kyoko Koizumi) he used to accompany to weddings as a paid guest, just beginning to enjoy being someone’s son when Fukuhara decides he’s reached the end of his road.

There is a sense that everyone is chasing the ghost of someone else or perhaps even themselves, Fumiya finding shades of the father who abandoned him in career criminal Fukuhara who tells someone else that he once had a son who died in infancy, and seeing something of his mother in fake wife Makiko discovering transitory roots in an unlived imaginary childhood. But then there are also occasions of cosmic irony such as a coin locker bag being full not of money but of bright red daruma dolls and tengu noses, or a rebellious street musician meekly bowing to the police. A repeated gag says you’ll have good luck if you spot iconic actor Ittoku Kishibe out and about in the streets, and perhaps in a way Fumiya does in learning to make peace with his childhood self walking with Fukuhara who also comes to accept his failures as a man, a husband, and perhaps a father too. Filled with zany humour and a warmth underlying its melancholy, Adrift in Tokyo is a meandering journey towards a home in the self and a sense of rootedness in the middle of a sprawling metropolis filled with infinite possibility.

Adrift in Tokyo is released on blu-ray in the UK on 12th December courtesy of Third Window Films.