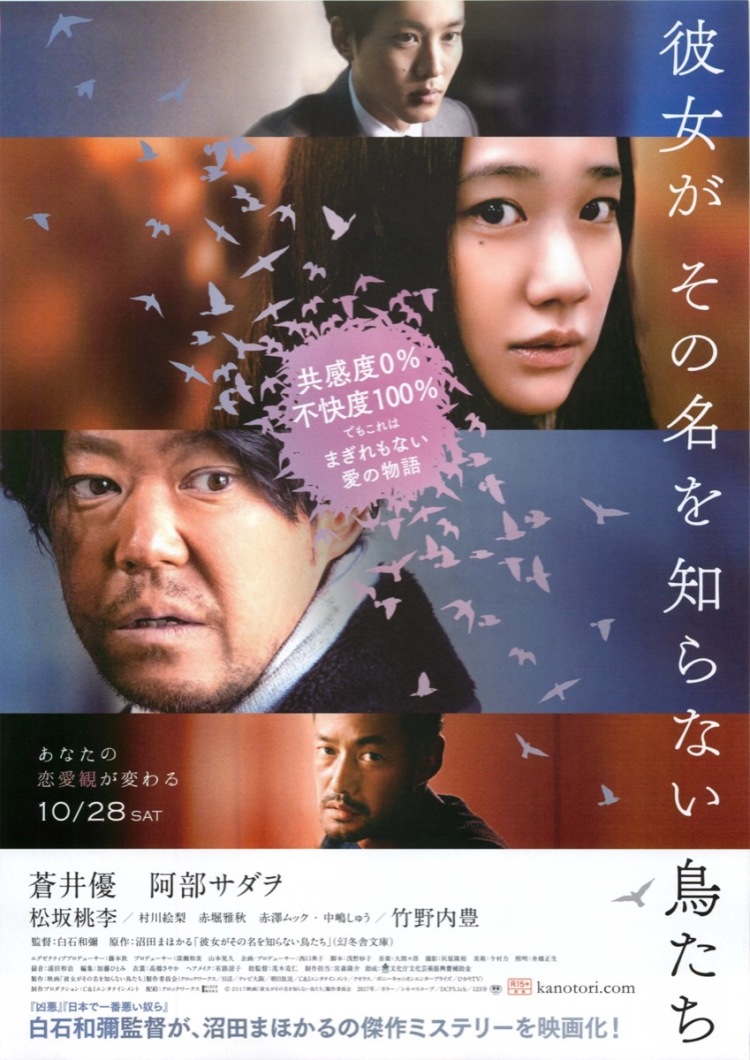 “Human beings are lonely by nature”, a statement offered by someone who could well think he’s lying but accidentally tells the truth in Kazuya Shiraishi’s Birds Without Names (彼女がその名を知らない鳥たち, Kanojo ga Sono Na wo Shiranai Toritachi). Loneliness, of an existential more than physical kind, eats away at the souls of those unable to connect with what it is they truly want until they eventually destroy themselves through explosive acts of irrepressible rage or, perhaps, of love. The bad look good and the good look bad but appearances can be deceptive, as can memory, and when it comes to the truths of emotional connection the sands are always shifting.

Towako (Yu Aoi), an unmarried woman in her 30s, does not work and spends most of her time angrily ringing up customer service departments to complain about things in the hope of getting some kind of compensation. She lives with an older man, Jinji (Sadao Abe) – a construction worker, who is completely devoted to her and provides both financial and emotional support despite Towako’s obvious contempt for him. Referring to him as a “slug”, Towako consistently rejects Jinji’s amorous advances and resents his, in her view, overly controlling behaviour in which he rings her several times a day and keeps general tabs on her whereabouts.

Depressed and on edge, Towako’s life takes a turn when she gets into a dispute with an upscale jewellery store over a watch repair and ends up beginning an affair with the handsome salesman who visits her apartment with a selection of possible replacements. Around the same time, Towako rings an ex-boyfriend’s number in a moment of weakness only to reconsider and hangup right away. The next day a policeman arrives and informs her that they’ve been monitoring her ex’s phone because his wife reported him missing five years ago and he’s not been seen since.

Towako views Jinji’s behaviour as possessive and his continuing devotion pathetic in his eagerness to debase himself for her benefit. Her sister Misuzu (Mukku Akazawa), however, thinks Jinji is good for her and berates Towako for her ill treatment of him. Despite the fact that Towako’s relationship with her ex, Kurosaki (Yutaka Takenouchi), ended eight years previously, Misuzu is paranoid Towako is still seeing him on the sly and will eventually try to get back together with him. Misuzu does not want this to happen because Kurosaki beat Towako so badly she landed in hospital, but despite this and worse, Towako cannot let the spectre of Kurosaki and the happiness promised in their earliest days go. She continues to pine for him, looking for other Kurosakis in the form of other handsome faces selling false promises and empty words.

Mizushima (Mukku Akazawa), the watch salesman, is just Towako’s type – something which Jinji seems to know when he violently pushes a Mizushima look-alike off a busy commuter train just because he saw the way Towako looked at him. Daring to kiss her when she abruptly starts crying while looking at his replacement watches, Mizushima spins her a line about an unhappy marriage and his craving for solitude which he sates through solo travel – most recently to a remote spot in the desert and cave they call an underground womb. Mizushima describes himself as a lonely soul and claims to have found a kindred spirit in Towako whose loneliness it was that first sparked his interest. Like all the men in the picture, Mizushima is not all he seems and there is reason to disbelieve much of what he says but he may well be correct in his assessment of Towako’s need for impossible connections with emotionally unavailable men who only ever cause her pain.

It just so happens that Kurosaki’s apparent disappearance happened around the time Towako began dating Jinji. Seeing as his behaviour is often controlling, paranoid and, as seen in the train incident, occasionally violent, Towako begins to suspect he may be involved in the mysterious absence of her one true love. Then again, Towako may well need protecting from herself and perhaps, as Misuzu seems to think, Jinji is just looking out for her. The deeper Jinji’s devotion descends, the more Towako’s contempt for him grows but the suspicion that he may be capable of something far darker provokes a series of strange and unexpected reactions in the already unsteady Towako.

A dark romance more than noirish mystery,  Birds Without Names takes place in a gloomy Osaka soaked in disappointment and post-industrial grime where the region’s distinctive accent loses its sometimes soft, comedic edge for a relentless bite in which words reject the connection they ultimately seek. Rejection, humiliation, degradation, and a hopeless sense of incurable loneliness push already strained minds towards an abyss but there’s a strange kind of purity in the intensity of selfless love which, uncomfortably enough, offers salvation in a final act of destruction.

Screened as part of the Japan Foundation Touring Film Programme 2018.