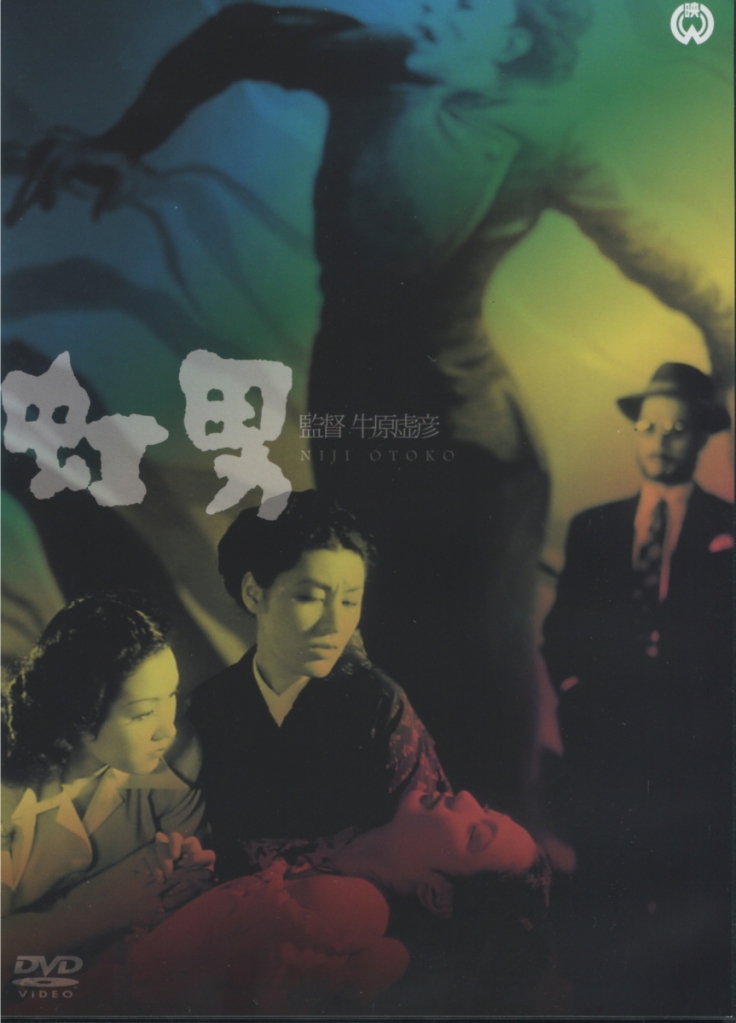 “The Rainbow Man” sounds like quite a cheerful fellow, doesn’t he? How could you not be excited about a visit from such a bright and colourful chap especially as he generally turns up after the rain has ended? Daiei have once again found something happy and made it sinister in this 1949 genre effort which is sometimes called Japan’s first science fiction film though there isn’t really any sci-fi content here so much as a strange murder mystery with a weird drug at its centre.

The story begins with lady reporter Mimi beating her rival Akashi to an important scoop but soon after she runs into an old school friend who seems about to become a major story herself. Yurie has been taken in for questioning regarding a mysterious incident in which a rural cottage burnt down with the body of a murdered man hidden inside it. Heading into town with her maid, Yurie was taken ill near the crime scene and the maid left to go get help meaning Yurie can’t account for the hour or so that she was alone there and being so ill her memories aren’t clear either.

The case at hand concerns the extremely strange Maya family which is led by the mad scientist father who insists on studying artificial rainbows despite an ancient curse on his family which makes this a very bad idea. He is joined by his equally mad artist son Katsuto who creates disturbing, psychedelic paintings, younger son Toyohiko who has recently returned after a five year absence, and his second wife who likes Yurie and cats but not much else. The murdered man, Hachiro, was also connected to the family and was the first to fall victim to the curse of the Rainbow Man!

Unlike some of Daiei’s other genre pictures from this period, Rainbow Man (虹男, Niji Otoko) is a little more straightforward and doesn’t feature any particularly complex special effects. That said, the most notable feature of the film is the rainbow effect itself – right before the murders occur, the victims start shouting about the Rainbow Man whilst hallucinating bright rainbow-like colours. At this point, the screen erupts with psychedelic colours in strong contrast to the regular black and white footage of the rest of the movie. As surprising as this effect is now, it must have been truly shocking to the audience of 1949 who were understandably much less used to colour movies let alone the use of colour in films otherwise monochrome.

Though The Rainbow Man is tagged as sci-fi or horror, it’s really much more of a regular murder mystery with a scientific bent. In the end, it all comes down to the effects of the perfectly natural real world drug mescaline which though unusual is not a scientific fiction. The only instance of strangeness is in the bizarre rainbow man curse in which the Maya family is not supposed to be asking questions about rainbows, which is fairly odd thing to be cursed with, but then they are a very odd family in all aspects. There is, however, a strong mad scientist vibe which, mixed with the creepy old Western style house and persistent stormy weather, makes for an excitingly gothic atmosphere.

The special effects were once again designed by Eiji Tsuburaya and, even if this isn’t such a FX heavy film as some of Daiei’s other movies from the period, are always quite exciting. Director Kiyohiko Ushihara does a nice job of keeping the tension up and provides several interesting set pieces filled with unusual compositions which also make good use of gothic lighting.

The Rainbow Man is also quite interesting as an example of female led genre cinema as lady journalist Mimi takes the central investigator spot and is presented as a talented reporter who always seems to outsmart her male counterpart from a rival newspaper, Akashi. The police too, who are also depicted as competent and open minded, take Mimi seriously by valuing her investigative skills and her desire to protect her presumably innocent friend from harm. The Rainbow Man might not be the sci-fi/horror film it is often supposed to be, but it does provide an intriguing murder mystery with gothic overtones and light layer of genre inflected strangeness.

Can’t find any clips of the movie but here’s a recording of the main theme plus some stills:

Who would win in a fight between The Invisible Man and The Human Fly? Well, when you think about it, the answer’s sort of obvious and how funny it would be to watch probably depends on your ability to detect the facial expressions of The Human Fly, but nevertheless Daiei managed to make an entire film out of this concept which is a sort of late follow-up to their original take on Invisible Man Appears from 1949. Like that film, The Invisible Man vs The Human Fly (透明人間と蝿男, Tomei Ningen to Hae Otoko) also adopts a deadpan, straightforward tone despite its rather ridiculous premise.

Tokyo is being plagued by a series of mysterious murders occurring in broad daylight in which the victim is stabbed through the back piercing the heart yet witnesses report seeing no suspicious activity near the crime scene. Perhaps The Invisible Man did it, hahaha….However, when the man sitting next to the professor in charge of researching the “imperceptibility device” is murdered in an aircraft toilet, the police get wise to a possibly surreal explanation for these bizarre crimes. The only other evidence they have is a connection between a sleazy nightclub owner, a friend of his and one of the murdered men who briefly served together during the war, the fact that one of the victims pointed at the sky before dying, and reports of a strange buzzing sound….

Interestingly, the major viewpoint here is from the policemen investigating the case and their attempts to get their heads around this extremely unusual series of events. As often happens with revisiting a form of technology which has been used for ill in the previous picture, here the “imperceptibility device” becomes a force for good as it might be able to help the powers at be stamp out The Human Fly. This time there’s not so much of the accompanying madness which is caused by going invisible but there’s still a heavy price to be paid as no one’s figured out a way of turning back which doesn’t involve rapid death from cancer immediately afterwards.

By contrast, The Human Fly is born of a man made serum developed by Japanese mad scientists during World War II and brought back by a man who was abandoned on an island by his comrades and subsequently left to take the wrap at a war crimes tribunal. He wants to use the technology to further his own success yet has a minion carrying out most of the dirty work. The Human Fly serum does, apparently, carry a number of psychological side effects including violent impulses, paranoia and addiction.

The special effects are not quite as good as in Invisible Man Appears though the invisible antics are not the focus of the film anyway. Bizarrely, The Human Fly is just a shrunken man who is somehow able to zip about like a regular fly even though he’s still dressed in his normal business suit and keeps his arms rigidly to his sides like some kind of human torpedo. Apparently, the buzzing sound is made because of his being very small (so says science) which gets around the inconvenient truth of him not having any wings or other fly-like characteristics other than the ability of flight.

It’s all very silly, though not quite silly enough in places. For the most part, the film plays out like a regular police procedural with slight noir undertones despite the obvious strangeness of the mysteries at hand. Though there’s obviously something to be made about the origin of the Human Fly serum and the anger of the “war criminal” who feels himself betrayed by his country, it’s a fairly subtle comment on post-war resentment. However, attitudes to the practice of scientific research do seem to have shifted with the researchers investigating the imperceptibility device cast as the good guys (though no particular reason for their work is ever offered) who can be relied upon to help catch the “bad guys” who are making use of “bad technology” to do “bad things”.

A fairly solid B-movie though one which is perhaps a little too po-faced for its genretastic title, The Invisible Man vs The Human Fly is an interesting mix of noir crime thriller with a little science fiction and even a few horror trappings thrown in. Thanks to its straightforward approach it may prove a little dull for genre enthusiasts but does offer its own kind of surreal iconography and it’s difficult to forget the sight of a tiny, angry looking besuited man flying around and committing random crimes while an invisible opponent stalks him from the shadows.

Scientific technology being put to a predictable use…..