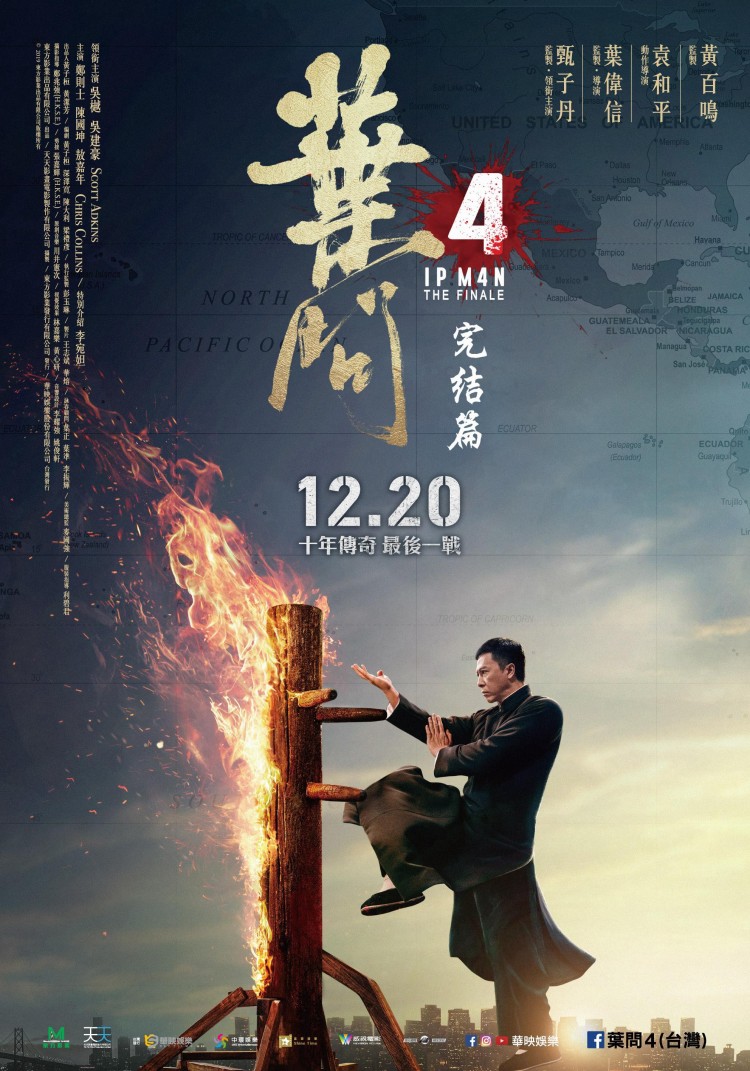 Superhero movies may be undergoing something of a complex reevaluation of late, but you can’t deny that they often come in unexpected forms. Ip Man, the man who made Bruce Lee, has himself become a mythical figure, a kind of kung fu saint defending ordinary Chinese people from oppressors and bullies. All heroes, however, must eventually meet their end. Ip Man 4: The Finale (葉問4：完結篇) brings the Donnie Yen starring series to a bombastic close with Ip seemingly facing off against the rising populism of the present day by kicking back against racist aggression in the San Francisco of 1964.

Why would Ip be in San Francisco, you ask? Because Bruce Lee (Danny Chan Kwok-kwan) invited him. Rewinding a few minutes, we discover that Ip has recently been diagnosed with throat cancer which is why he politely declines Bruce’s offer to pay for him to fly to the US to see him in a karate tournament. Personal matters, however, change his mind. His wife now passed away, Ip is struggling to connect with his increasingly rebellious son Jin (Jim Liu) who has been expelled from school for fighting. All Jin wants is to study kung fu like his dad, but Ip doesn’t approve. The headmaster advises him that unruly kids might do better abroad and so Ip decides to visit Bruce and check out schools in the US in the process, but he quickly runs into trouble on learning that the elite private institutions of the area require a recommendation from the Chinese Benevolent Association. The CBA are of the opinion that Chinese martial arts are for the Chinese people and are very angry about Bruce Lee’s determination to teach them far and wide. They were hoping Ip could talk some sense into his former pupil, but Ip is firmly on Bruce’s side. He too believes that martial arts should be a bridge between peoples, not a secret weapon preserving its mystique to intimidate.

This central divide becomes the film’s axis with head of the CBA Wan (Wu Yue) gently reminding Ip that he does not live in the city and is ill qualified to comment on local politics while advocating a gentle path of quiet appeasement. Wan clashes with his feisty daughter, Yonah (Vanda Margraf), who wants to be a cheerleader but faces constant micro aggressions from the openly racist rich kids at the same elite high school Ip wants to send Jin to. Yonah disagrees with her father’s turn the other cheek philosophy and longs to use the martial arts she didn’t particularly enjoy learning for their real purpose, later bonding with Ip after he steps in to frighten a group of posh thugs who attacked her on instruction from her rival on the cheerleading team.

The anti-racism theme slowly dovetails with the mirrored threads of failing fatherhood as Ip realises that he has made all the same mistakes as Wan. Yonah is impressed by Ip’s aura of quiet authority and spiritual power, instantly striking up a kind of paternal relationship with him, but offers cutting critique in casually echoing Jin’s words in complaining that her father has never supported her. Facing his mortality, Ip wanted to ensure his son’s independence as quickly as possible, but refused him the independence of deciding his own future. Eventually he realises that the only way to atone for his failure as a father is to pass his knowledge on while he still can, but a key part of that is that a martial artist must stand up to injustice wherever they see it, which is pretty much everywhere in San Fransisco in 1964.

Somewhat incomprehensibly, the great evil this time around is a group of massively racist karate enthusiasts who like to shout racial slurs at the practitioners of Chinese kung fu. Granted massive racists are not known for their critical thinking abilities, but no one seems to have told them that karate was not born in America which makes their animosity towards kung fu all the stranger. Yet, just as Ip and Bruce had suggested, martial arts can indeed be a bridge as Bruce discovers in besting a promising challenger in an alleyway and getting a big thumbs up in return.

Not everyone is as easily won over, however. Ip’s final battle against a crazed marine instructor (Scott Adkins) plays out as if he really has defeated racism in America by punching out a meat headed bigot with fatherly righteousness which is, however you look at it, a little on the flippant side. It also, of course, plays into the persistent “just stay in China” message of contemporary Chinese cinema, but nevertheless presents a slightly subversive front in clumsily uniting the oppressed population of the city under Ip’s revolutionary banner in opposition to entrenched racism, classism, corruption, and nepotism. Awkwardly delivered perhaps, but you can’t argue with the broadly positive plea for cultural exchange and international co-operation as the best weapons against injustice. 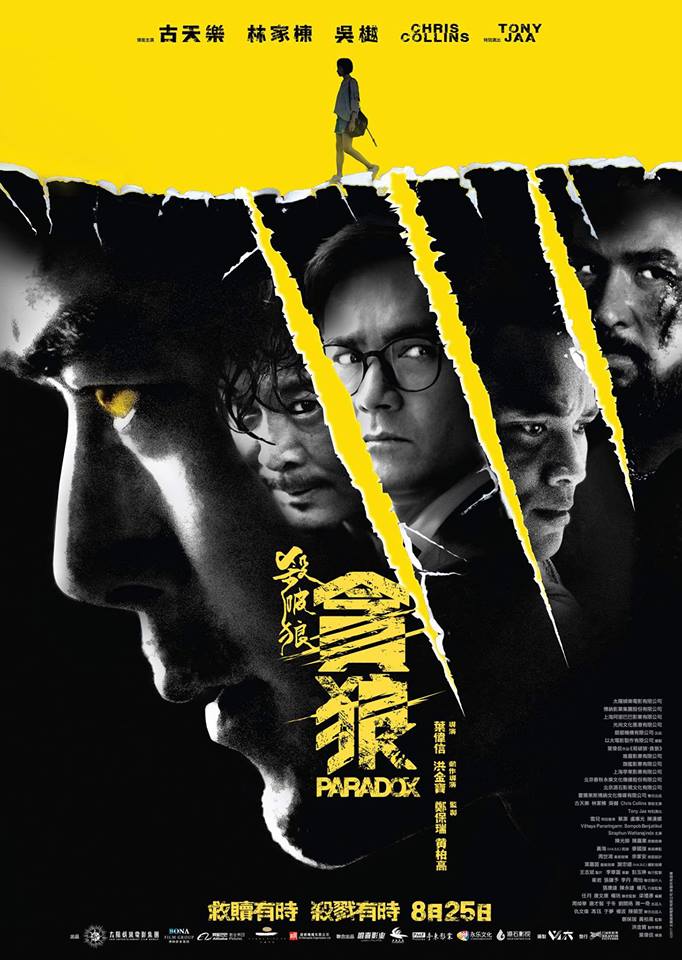 Louis Koo, possibly the hardest working actor in Hong Kong, has played his fair share of heroic (and not so heroic) cops but you’d be hard pushed to describe him as an action star. Proving nothing if not his dedication, Koo gives it his all as the lead in Paradox (殺破狼・貪狼), the latest in the SPL franchise directed by Ip Man’s Wilson Yip. Yip also directed the first in the series but stepped away for the second, though there is no narrative continuity with any of the films and, confusingly enough, the SPL tag seems to have been dropped from the international title altogether. In any case, what Paradox shares with instalments one and two is a series of intensely kinetic action scenes built around a storm of three incompatible personality types coupled with a quest narrative as Koo searches for clues in the disappearance of his 16 year old daughter.

Yip begins the film inside the memories of Hong Kong cop Lee Chung-Chi (Louis Koo) as he remembers the golden time when his daughter was young and worshipped her dad, crawling into his bed in the morning with a video camera ready for a whole day of birthday fun. Lee buys a cute a silver bracelet with a teddy bear charm but it’s the 16 year old Wing-Chi (Hanna Chan) he gives it to. Lee and his daughter are in a restaurant, not at home, and the air between them is tense. A boy turns up and Wing-Chi introduces him as her boyfriend but if Lee is annoyed things are about to get worse. The pair want to get married because Wing-Chi wants “to keep the baby”. Lee barely reacts save for abruptly stepping away from the table. When he returns he seems as if he’s composed himself, but in reality he has already made a catastrophic error of judgement which will force his daughter away from him.

Wing-Chi goes to Thailand to visit a friend and disappears. Lee goes to look for her, breaking out his best investigator skills and teaming up with local cop Chui Kit (Wu Yue) who is soon to be a father himself, but what he finds there leads him onto a dark path of paternal guilt, regret, and suffering whilst wading through the corruption and cruelty of the Thai underworld.

Though the narrative is, in a sense, unimportant, Yip homes in on the nature of fatherhood and the sometimes difficult or conflicted position a father finds himself in when trying to protect his child. Lee may think he’s “doing the right thing” when he clamps down on his teenage daughter’s plans to start a family of her own way ahead of schedule, but then again perhaps this was not his decision to make and ruining three lives to suit himself is nothing more than selfishness masquerading as love. It is his own actions which send his daughter into the path of danger, and then later decide her fate on a split second decision.

Later, Kit’s father-in-law (Vithaya Pansringarm) faces a similar dilemma when he’s threatened by government big wigs and fears his own daughter (and unborn grandchild) may be in danger if he does not play along. Lee’s quest to find Wing-Chi runs in parallel with that of the local mayor to win re-election, only the mayor has a bad heart which causes him to collapse before an important rally. Shady fixer Cheng (Gordon Lam) decides the mayor needs a heart transplant (seemingly unaware of the complexity of the operation and the time needed for recovery) which all links back to a dodgy American ex-pat (Chris Collins) who operates a large scale meat factory as a front for illegal organ trafficking.

The stories of Kit and Lee are linked by the curious use of the classic Chinese pop song The Moon Represents My Heart made famous by Teresa Teng. The song with its constant references to the “heart” which is also visually represented by the cheerful cards around the mayor’s bed perhaps over does things in the metaphor stakes but does its best to tug at the heartstrings in its insistence on a fathomless love in this case of fathers for their children. Koo’s rage only intensifies the more desperate he becomes as his quest hits continual dead ends punctuated by the discovery of various unpleasant characters lurking not just in the backstreets but in the police stations and political institutions of Pattaya.

The action scenes are visceral and kinetic though Koo makes the most impact when acting with stone cold efficiency, leaving the most memorable sequences to rising star Wu and Tony Jaa whose extremely brief appearance as a psychic / extremely buddhist cop may disappoint those deceived by his top billing into expecting his role to be more than a cameo. Nevertheless, Paradox delivers what it promised in Koo’s unexpected metamorphosis into an ultra cool action star whilst sending his moody cop on a dark journey of the soul as he confronts the depths of his own complicity in the corruption which is consuming him.