“Why did you turn this place into hell?” a reformed gangster asks his defeated enemy only to be told that nobody made the world this way, it is just is. In any case, Yoon Young-bin’s purgatorial gangster epic Tomb of the River (강릉, Gangneung) finds itself in a world of conflicting moral values in which organised crime has become increasingly legitimised conducted by men in sharp suits sitting in elegant surroundings but no less thuggish, violent, and immoral than it ever was.

The two opposing forces are hippyish middle-aged enforcer Gil-suk (Yu Oh-seong) whose boss has adopted an anti-violence philosophy, and the psychotic Min-suk (Jang Hyuk) whom we first meet as the only survivor of a smuggling boat massacre hiding in the hold eating the dead bodies of his comrades whom he may or may not have killed himself. The battle ground is a new casino resort in the previously peaceful rural backwater of Gangneung shortly to host the upcoming 2018 Winter Olympics. Gil-suk’s ageing boss decides to hand him the reins of the business but he objects out of old-fashioned gangster etiquette because the complex is technically located in an area handled by his colleague Chung-sub (Lee Hyun-kyun) who is currently in the boss’ bad books after a group of young people were found passed out having taken drugs in one of the karaoke rooms he manages.

Gil-suk is perhaps a representative of disingenuous contemporary corporatised gangsters who still operate like thugs but do so with a veneer of elegance, his now elderly boss having achieved a state of zen in giving him small pieces of wisdom such as “don’t fight. If you fight you suffer whether you win or lose”. Gil-suk later echoes him when he tells his friend to leave Min-suk alone and that rather than fighting they should share a meal with him sometime instead acknowledging that his gang members’ lives seem to have been hard. But his compassion is as it turns out, misplaced, Min-suk is not the sort of man who can be befriended or softened with kindness for he is the personification of humanity’s baser instincts in unbridled selfishness and destructive desire.

“I did it to survive” his underlings often justify themselves, believing they have no other option than to behave the way they do while Min-suk exploits the venality and misfortune of others as a kind of get out of jail free card promising to wipe their debts if they take the fall for his crimes. Sooner or later everyone betrays everyone else for reasons of greed or self-preservation, even Gil-suk eventually pulled towards the dark side while his policeman friend (Park Sung-geun) attempts to save him from himself. “What other choice did I have?”, he asks, but to conform to the dubious morality of the world around him. He criticises the police for a lack of action, but watches and does nothing as Min-suk carves up his entire squad of foot soldiers while patiently making his way towards him.

The irony is that Gil-suk had been the good gangster, never wanting more than he needed and always happy to share. He is confused by the betrayal of his closest friends because he cannot understand their motivation. He had always thought of the resort as “ours” never considering that it could be “mine” while his friend tells him he should take it all because if he doesn’t someone else will. To prove his point Gil-suk tries to broker a peaceful solution by offering to share control with Min-suk in a process of appeasement, suggesting he take the club while he keeps the casino and they split the profits between them before eventually deciding to surrender it entirely in order to curry favour with an even shadier corporate gangster whose polite interest in the resort he’d previously rebuffed.

Taking on spiritual dimensions in its gloomy backgrounds, battles fought under the light of a full moon, and the snow falling over the living and the dead in the melancholy final sequence Yoon’s hellish tale seems to take place in a gangster purgatory in which as Gil-suk finally announces romance really is dead, in its place only internecine violence and the intense desire to survive by any means possible mortal anxiety provoking only preemptive greed and cruelty. As Min-suk suggests “only death will end things” but everyone here is in a sense already dead only trapped in the eternal limbo of the gangster mentality.

Tomb of the River streamed/screened as part of this year’s Udine Far East Film Festival. 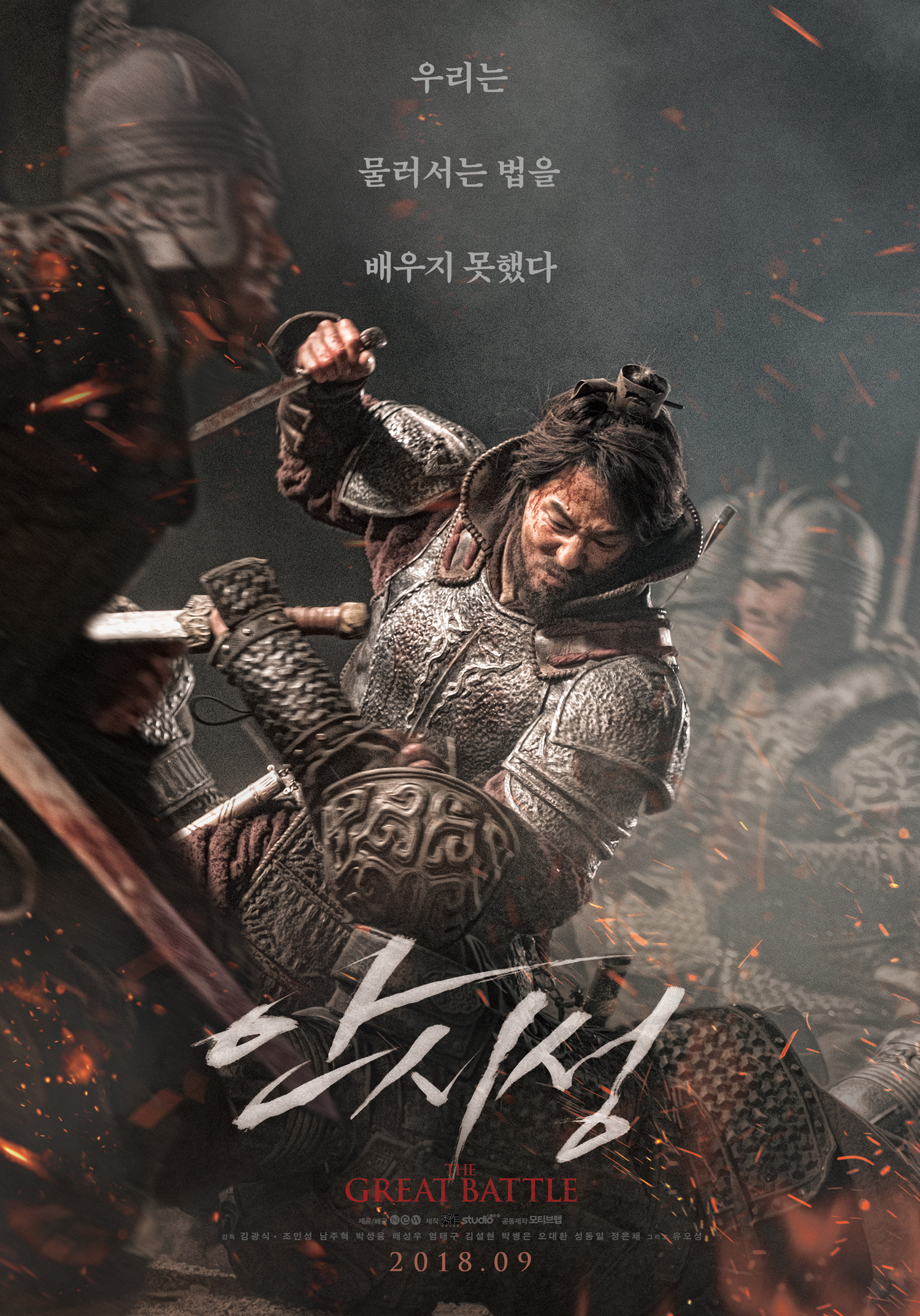 The moral of every Korean war film, period and modern, is that Koreans are resilient and resourceful. They can accomplish great things when they work together in a spirit of collective good. Kim Kwang-sik’s The Great Battle (안시성, Ansi-seong), is no different in this regard for being set in 645AD when Goguryeo is threatened by the warlike Tang Dynasty which has its eyes firmly set on conquest.

Meanwhile, there is drama in the court. The king has been usurped and most of the lords have fallen behind General Yeon (Yu Oh-seong) who promises to vanquish the Tang, but to do so he intends to cede territory and abandon his fellow citizens (mostly peasants) to the mercy of Emperor Li (Park Sung-woong). However, the governor of Ansi understandably objects and has alone chosen to stand against Yeon in support of his people, vowing to fend off the Tang all alone by defending his garrison to the last man if necessary. To facilitate his plan, Yeon orders Ansi native and earnest cadet Samul (Nam Joo-hyuk), still grieving for the loss of his brother in a previous battle, to infiltrate the recalcitrant fortress and assassinate Yang (Jo In-sung) so that the territory can be razed.

Having been inducted into the city and despite his fierce loyalty to Yeon, Samul begins to question his mission the longer he is exposed to Yang’s unfettered nobility. A lord but also a man of the people, Yang thinks of himself as a leader among equals. He is not the type to observe from the safety of the rear lines, but proudly wades into battle alongside his men, unafraid to risk his life in their service. In fact, Yang is also perfectly aware of Samul’s true intentions, but is prepared to let him bide his time as a son of Ansi in the hope that he can be turned. Orders, as it turns out, are less important than doing the right thing, and Yang, out of sense of loyalty to the old king refuses to throw his lot in with Yeon, especially if it means he is supposed to throw away the lives of his subjects without a fight.

This necessarily means that the people of Ansi are left with the prospect of fending off the entire might of the Chinese Empire with only a garrison army and limited resources. Of course, they succeed – largely through ingenious stratagems and a sense of solidarity. The Tang, not to be outdone, decide to build an entire artificial mountain in order to fight on Yang’s level, bedding in for months of siege as they do so, but there is no crisis Yang cannot overcome and Emperor Li is about to discover he has seriously underestimated the capabilities of Goguryeo warriors when their backs are to the wall.

Not for nothing does Li eventually mutter that it’s bad idea to go about invading Korea and instruct his successors never to bother trying. Sacrifices, however, must be made – many of them romantic. Yang’s dynamic sister (Kim Seol-hyun), a talented bow woman, has long been in love with the head of his cavalry (Uhm Tae-goo) but Yang tells them to delay their happiness until after the war while he himself nurses a broken heart over a young woman who ended up becoming a shamaness (Jung Eun-chae) and later falls into the hands of the Tang. Not everyone is as convinced by Yang’s boldness as he is, and even some of his own people decide perhaps it would be better to simply acquiesce in the face of such overwhelming odds, but Yang remains firm. He will protect his fortress and the people inside it from anything which threatens their peaceful way of life.

In contrast to Yeon’s authoritarian austerity, Yang’s leadership is one built on nobility and fellow feeling. He hopes to create a freer, more equal society in which the king exists to serve the people rather than the other way around. The battle for Ansi is then an oddly revolutionary affair as they fend off imperialists on either side, bowing neither to Li nor to Yeon in steadfastly defending their principles against overwhelming odds. Kwang achieves truly epic scale through the modern wonder of CGI and ensures his battles are suitably gruelling while keeping the patriotism in check as Yang makes himself stand for something bigger than nationhood or ancient nobility in solidarity as he leads from the front but gives the power back to his people.

The Great Battle was screened as part of the 2019 Udine Far East Film Festival.