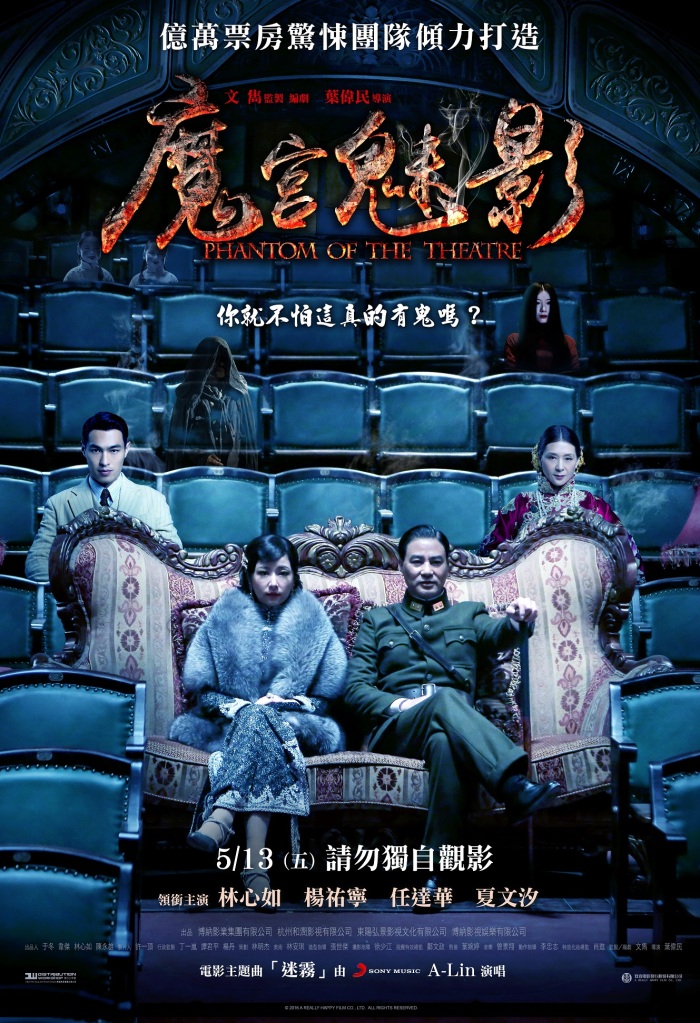 No ghosts! That’s one of the big rules when it comes to the Chinese censors, but then these “ghosts” are not quite what they seem and belong to the pre-communist era when the people were far less enlightened than they are now. One of the few directors brave enough to tackle horror in China, Raymond Yip Wai-man goes for the gothic in this Phantom of the Opera inspired tale of love and the supernatural set in bohemian ‘30s Shanghai, Phantom of the Theatre (魔宫魅影, Mó Gōng Mèi Yǐng). As expected, the thrills and chills remain mild as the ghostly threat edges closer to its true role as metaphor in a revenge tale that is in perfect keeping with the melodrama inherent in the genre, but the full force of its tragic inevitability gets lost in the miasma of awkward CGI and theatrical artifice.

Shanghai was a swinging, cosmopolitan town in the 1930s. A multicultural melting pot it was both a business centre and a bohemian paradise in which the Chinese film industry flourished. Aspiring film director Gu Weibang (Tony Yang) has just returned from studying in France and is looking for an actress to star in his first project. Attempting to hand his script to the winner of the local awards ceremony, Weibang’s plan is frustrated by some awkward political shenanigans between an older actress, a younger one, and the patron that’s trying to abandon one woman for the other, but Weibang is soon to have more problems on his plate connected to the series of strange deaths which have begun to occur in the “haunted” theatre in which he wants to shoot his upcoming masterpiece.

The mystery element fades relatively quickly as we’re introduced to the very human villain who does, however, behave in an appropriately phantom fashion as he appears and disappears in various locations around the ruined theatre, making use of secret passages and hidden doorways to put his dastardly plan into action. The main thrust of the narrative is the gothic romance between Weibang and his leading actress Meng Si-fan (Ruby Lin) which is complicated both by his existing girlfriend (the pathologist working on the mysterious theatre deaths) and the spectre of the long buried past. The fire which destroyed the theatre 13 years previously resulting in the deaths of a troupe of acrobats lies at the centre of the mystery but places the two lovers on different sides of an unbridgeable divide as powerless bystanders in the newly post feudal world.

Weibang wants to make films about the things people can’t say – an interesting meta comment given that ghosts are still taboo all these years later, but the irony is that film is a seductive dream, a distraction from the reality, a haunted theatre all of its own. Dreams, reality, and cinema begin to overlap as Weibang finds himself playing the leading man and falling for the leading lady in a tragic supernatural romance whilst his creepy setting continues to give up its own ghosts. In the end the only ghosts Weibang and Si-fan will have to deal with are ones of their own pasts. Faced with a final showdown, long buried truths are finally revealed and choices made but the bittersweet ending leaves us on a positive note as those concerned discover the power of forgiveness – that forgiving others is an act of kindness to oneself and revenge little more than the theft of your own life in pointless pursuit of retribution.

Yip places the emphasis on his visuals with a sumptuous, truly gothic aesthetic filled with faded grandeur, Western architecture, and candle lit rooms perfect for suggestive shadows and ghosts which lurk in mirrors. Though occasionally plagued with poor quality CGI and leaning towards theatrical artificiality in its studio bound look, Phantom of the Theatre does succeed in building a generally creepy atmosphere even if failing to reach the giddy heights of China’s finest take on the material so far – A Song at Midnight. Despite the solid visuals, Phantom of the Theatre never achieves the levels of doomladen fatalism and inexorable malevolence which the genre demands nor does it succeed in making its central romance truly matter lending it a slightly underwhelming quality. Still, the impressive visuals and melancholy tone make for a charmingly old fashioned ghost story in which the haunting is all too real.