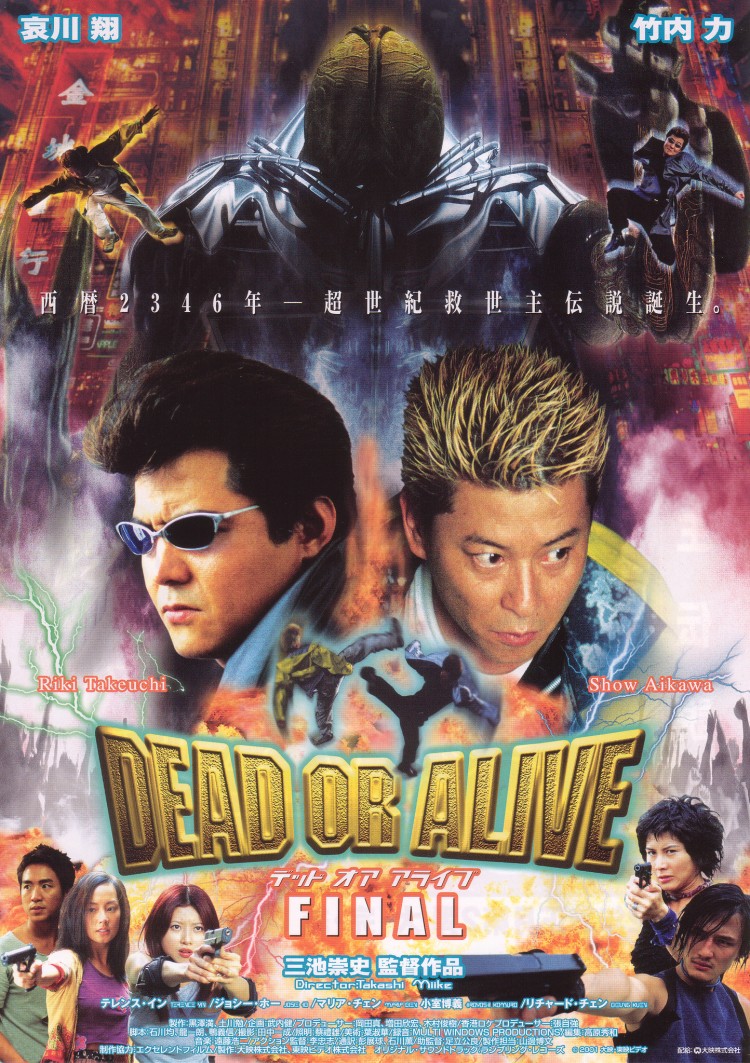 The Dead or Alive Trilogy began in a furious, drug fuelled hymn to violence in which a petty vendetta between the opposing forces of good and evil (mingled and bloody) eventually destroyed the entire world. Dead or Alive 2: Birds was an altogether more contemplative affair in which two orphaned boys rediscover each other as jaded hitmen and decide to put their talents to “good” use by donating the hit money to pay for medicinal drugs for impoverished children around the world. Strange and surreal, Birds moved beyond the first film’s absurd ending for an altogether more abstract approach to universe building but Final pushes the idea to its limit in a cyberpunk infused far future tale of rogue robots and sexual dictatorship.

Yokohama, 2346. A new society is being forged, a new social order has been created. All powerful Mayor Wu (Richard Chen) has decreed that the only true love is gay love and made heterosexuality taboo. Births are strictly controlled to maintain population numbers with contraception ruled mandatory. The heterosexual resistance has gone into hiding in a ruined part of the city, living in a free love commune in which the birth of children is a primary goal. Lead by Fong and his first lady Jun, the resistance aims to liberate the people from the yoke of the crazed dictator and create a better, freer world for the as yet unborn children of the future. Teaming up with a rogue “Replicant”, Ryo, (Sho Aikawa) the gang attempt to further their cause by kidnapping the young son of Wu’s chief of police, Honda (Riki Takeuchi), who later discovers some uncomfortable truths about his own existence.

The use of the world “Replicant” is a pointed one and an overt reference to Final’s key text – Blade Runner, though its intentions amount much more to a pastiche than an examination of the existential questions so central to the seminal cyberpunk classic. Online captions state the action is taking place in Yokohama – an industrial harbour town close to Tokyo, but is in reality a thinly disguised Hong Kong with a green tint. Nevertheless, Miike makes the most of rundown industrial complexes now overrun by nature and the symbols of historical hubris. Aside from the flying cars and other CGI touches, the dystopianism is all too real in its sense of economic and social failures which have allowed a man like Wu to run a strange fascist police state even in the absence of the necessary infrastructure.

In keeping with the Hong Kong setting the Yokohama of 2346 is largely Chinese with broad mix of intermingled languages. Once again the nature of family is called into question but this time more through a large scale change in the social order which sees birth strictly controlled through medical and cultural enforcement. The largely Cantonese speaking resistance movement want to create a world where children can be born and then grow up freely, neatly echoing the previous films’ preoccupation with the fates of children as considered by orphans. Aside from their idealism, the Resistance turns out not to be so far removed from the petty gangsters of the previous instalments as they ultimately turn on each other with deadly consequences.

Sho Aikawa and Riki Takeuchi face off once again with Aikawa playing a Rutger Hauer-esque android who proves his “humanity” through his affiliation with children. A “Replicant” from a long forgotten war, Ryo has superpowers which allow him to stop bullets in mid-air or send out sparks of energy but is also at home playing the clown as he brushes his teeth nonchalantly in the middle a fist fight or plays dead to entertain a little boy. Takeuchi’s Honda, by contrast, is the stereotypical gestapo inspired secret police chief whose family life is a hollow one devoid of genuine feeling and maintained solely for professional expectation.

If Miike has been playing Blade Runner all along, his finale jumps ship for Tetsuo: The Iron Man as the trilogy’s leading men relive the totality of their experiences across three different plains of existence before merging into one as a kind of angel of destruction. The cycle of violence has reached its apotheosis as the twin angels are sent to wreak revenge on those who have misused their authority. Shot on high grade video, Final makes the most of its more modest production values but can’t help suffering in comparison to its predecessors. The B-movie opening is a helpful clue to Miike’s intentions as he creates his own kind of sci-fi dystopia inspired by pop culture memories, but even if the overarching themes lack integrity, Final provides the perfect ending for this often frustratingly absurd series, defying rational explanations until the end of time.