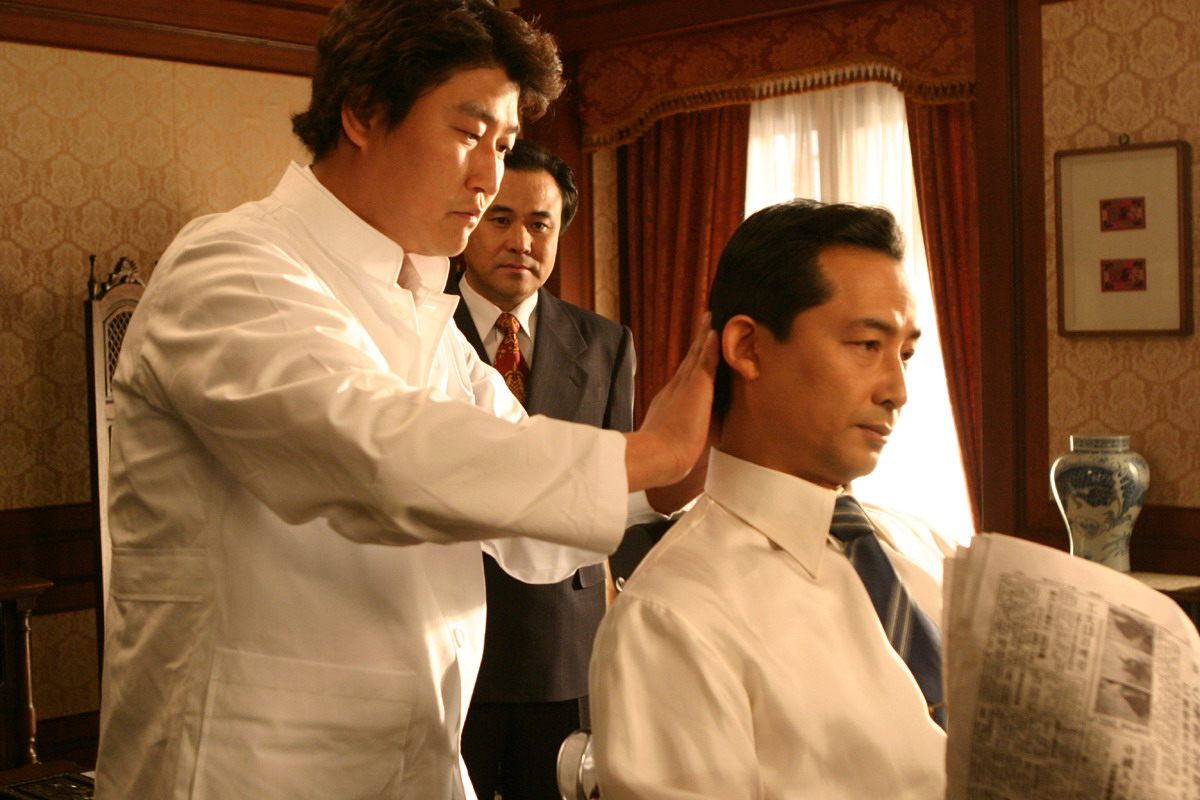 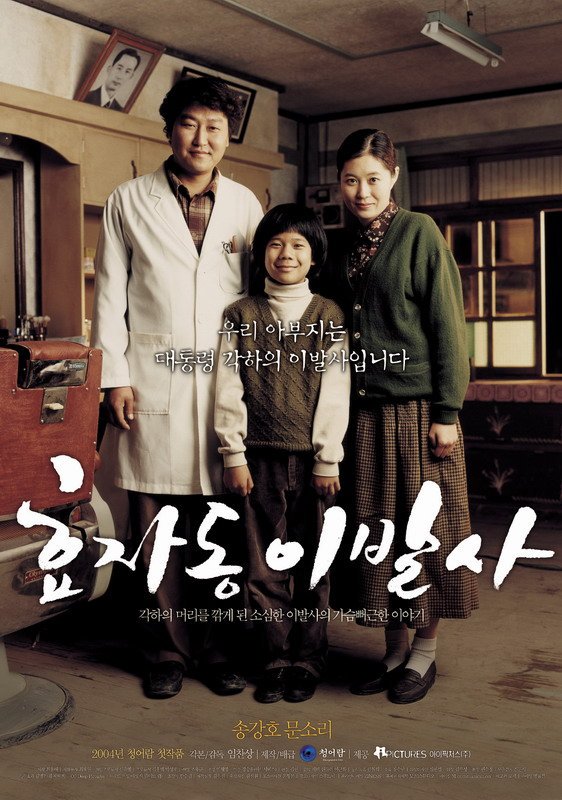 We each of us live in the midst of history being made, some of us closer to the action than others. Most of us don’t quite realise how close we are or fully understand our role in events until it’s too late, but in any case we’re all just too busy getting on with the business of living to give much thought such grand concepts as history or legacy. Song Kang-ho has made a name for himself playing genial everymen forever at the mercy of historical machinations, but before he was an apathetic Taxi Driver, he was an apathetic barber giving haircuts to a dictator he half imagined was a friend. The President’s Barber (효자동 이발사, Hyojadong Ibalsa) is part journey into the intersection between rosy childhood nostalgia and national trauma, and part subtle political satire on the moral corruptions of authoritarianism but its own soft heartedness is often at odds with the grimness of its purpose.

Sung Han-mo (like the counter for tofu) is a nice but dim sort who has his own barber’s studio right across from the Blue House. As his son (Lee Jae-eung) tells us in his cutsey voice over, Han-mo (Song Kang-ho) is easily led and content to do whatever the village leader tells him to do, including participating in the ongoing corruption surrounding the re-election of despotic president Rhee Syngman. Our narrator, the oddly named Nak-an, was born as a result of a brief indiscretion between his father and an assistant (Moon So-ri) who had, apparently, hoped to marry someone else from her home village if Han-mo hadn’t trapped her with maternity. She wanted wanted an abortion but didn’t find out until after the much publicised five month cut off, meaning Han-mo talked her into staying and little Nak-an acquired the unfortunate nickname of “five months Na-kan”.

The family live happily enough until the mid-1960s when Park Chung-hee stages a coup and declares himself “President for Life”. When Han-mo somehow manages to catch a “North Korean Spy”, he gets himself a commendation and the attention of the authorities (for good or ill). A KCIA agent dutifully turns up and hauls Han-mo off to the Blue House because the president needs a trim…

Park’s reputation underwent something of a rehabilitation for a time. He did, in the minds of those seeking to justify his tyrannical reign, preside over Korea’s economic recovery. Han-mo is one of many to prosper, in his case directly in working indirectly for the regime. Han-mo is a simple man, he doesn’t think about politics but often feels belittled and downtrodden, made a figure of fun by those close to him even whilst remaining a cheerful optimist. He doesn’t take much convincing to hitch his mule to Park’s waggon, enjoying the personal boost in his social standing and finally feeling like a someone in being introduced to the world of the elites even when he is forced to accept that he does not and cannot exist fully within it.

Han-mo cuts hair, chatting away the way a barber does without really realising either that he is a vox pop spy or that he might, at any time, say the wrong thing and land himself in serious trouble. Serious trouble arrives during a heated and extremely bizarre period of political hysteria surrounding the “Marxus” virus – a lamentable episode in which an epidemic of dysentery was blamed on North Korean spies and all those who suffered from the condition taken in for “questioning”. Only when his own family is threatened does Han-mo start to reconsider his role in the affair – his status as a peripheral member of the Blue House team is no help in protecting those close to him and he can no longer pretend he does not know what happens in those basements, and that it happens to ordinary people not just “suspicious” ones.

The low level satire derives from Han-mo’s background presence becoming foreground as a very personal spat between a couple of high ranking Blue House staffers gathers in intensity before exploding into events which will have profound, though short-lived, consequences for Korean political history. Han-mo sadly takes down his portrait of Park hanging in pride of place in his shop and replaces it with one of Chun Doo-hwan (who was bald). Still a simple man he has, at least, learned his lesson and prepares to turn down the “honour” of shaving a dictator’s chin. Korea, the film seems to unsubtly hint, is finding its feet again though there will be another long reckoning before it, like Han-mo and his family, is finally able to free itself of the militarist yoke.