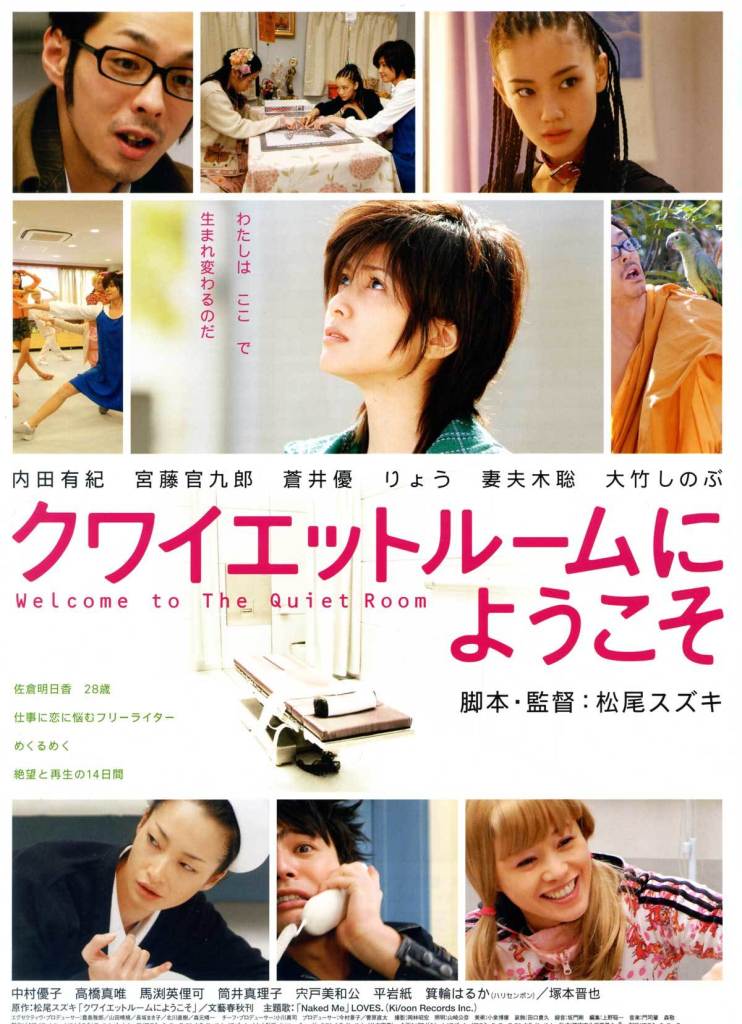 Everyone has those little moments in life where you think “how did I get here?”, but thankfully most of them do not occur strapped to a table in an entirely white, windowless room. This is, indeed, where the heroine of Suzuki Matsuo’s adaptation of his own novel Welcome to the Quiet Room (クワイエットルームにようこそ, Quiet Room ni Yokoso) finds herself after a series of events she can’t remember but which seem to have involved pills and booze. A much needed wake up call, Asuka’s spell in the Quiet Room provides a long overdue opportunity to slow down and take a long hard look at herself but self knowledge can be a heavy burden.

After her initial confusion, Asuka (Yuki Uchida) is informed by the no nonsense matron, Eguchi (Ryo), that she’s been brought in after an overdose. Everyone seems to assume it’s a suicide attempt, though Asuka can’t remember a thing. Apparently her roommate found her and called and ambulance and has now signed the committal papers which means Asuka is stuck here until the doctors say she’s fit to leave. Aside from the obvious, this is bad news because Asuka has a series of tight deadlines she’s been busting her gut to meet and is worried about losing her contracts. Whatever she might feel about it, it seems as if Asuka will have to rely on the kindness of strangers a little longer before she can finally get back to her exciting freelance world.

Aspects of Asuka’s previous life are illuminated gradually through flashback accompanied by her post-committal deadpan voiceover. After a brief career as a model, Asuka got married, divorced, and then hooked up with her present roommate, Tetsuo (Kankuro Kudo), who hooked her up with a series of freelance writing gigs which have only contributed to her stress levels with their ever present deadlines. Prior to her hospitalisation, Asuka was a rather silly, perky woman with a self confessed preference for “idiots” when it came to her circle of friends. Slowly and in the absence of her regular methods of self medication, all of Asuka’s illusions about herself and the way she was living her life begin to crumble. Finally able to cut through the noise, Asuka is forced to come to terms with a significant amount of guilt relating to a decision taken during her marriage whilst also acknowledging the effect crippling depression has had on her way of life.

Whilst in the hospital, Asuka comes in to contact with the other residents who have various needs and demands, each exemplifying the problems plaguing modern women. Tellingly, the majority of the women on the ward are younger – some just teenagers or young adults, all suffering with various kinds of eating disorders. One such patient, Miki (Yu Aoi), quickly befriends Asuka and teaches her how to survive in the increasingly surreal hospital environment. Asuka later makes friends with another recovering overdose patient around her own age, Kurita (Yuko Nakamura), but conversely finds herself harassed by the ward’s resident fixer, former adult video actress Nishino (Shinobu Ootake), while other residents make repeated escape attempts or go to great lengths to set their hair on fire.

Asuka’s Wizard of Oz inspired outfit, hair, and the silver Dorothy slippers which play into a repeated motif of Asuka’s memories of a high school culture festival, all reinforce the idea of the hospital as a strange otherworldly place in which Asuka will be residing temporarily until she completes her quest. The temporary nature of the space gives Asuka’s journey a rather melancholy atmosphere as she’s encouraged to forget all about her time there when transitioning back to the “real world” meaning that the fragile bonds and friendships created during in her hospital sojourn will have to be left behind. Finally learning to calm down and take charge of herself, Asuka rediscovers a long absent inner strength and the last image we see of her is in raucous laughter after an catching sight of an improbable event through a car window.

Matsuo opts for a less madcap treatment than the far out comedy of Otakus in Love but carefully balances an absurd sense of humour with dramatic weight as Asuka’s personal discoveries are intercut with increasingly surreal episodes. Yuki Uchida shines in a early comeback role as the two very different Asukas even if she almost has the show stolen out from her by another beautiful performance from Yu Aoi as the sensitive goth Miki. Tackling a weighty subject with warmth and good humour, Welcome to the Quiet Room is another characteristically off the wall character piece from Suzuki, but all the better for it.