Eat, drink, and be merry, as they say, for tomorrow we may be gone. The hero of Masahide Ichii’s Our Meal for Tomorrow (僕らのごはんは明日で待ってる, Bokura no Gohan wa Ashita de Matteru) has committed himself to the first of those, is still too young to be much interested in the second, and is resolutely failing at the third. Somewhat gloomy and introverted, he has decided on a course of self-isolation, convinced that it’s better not to get attached because all attachment ends in heartbreak, but a life without sensation is barely a life at all and in the end all you can do is live while you’re alive taking your pleasure where you can.

Young Ryota (Yuto Nakajima) is a dreamy high school boy with his head in the clouds. Bamboozled into participation in a sack race relay with pretty classmate Koharu (Yuko Araki) he approaches the matter in characteristically analytical fashion, eventually realising that he, taller and stronger (physically at least), will have to take the lead if they are to move forward. Off the track, however, that’s a lesson he finds difficult to learn. After their victory, Koharu stuns Ryota by confessing that she asked him to join her in the sack race precisely because she has a crush on him. He panics and apparently turns her down, but eventually reconsiders.

Their romance continues in typical high school fashion, only strengthening as they prepare to move on to new stages in their lives in heading off to uni while idly dreaming of an imagined future with the family they will forge together as adults. There is however a shadow hanging over their love. The reason Ryota is so brooding and contemplative is because he’s reeling over the death of his older brother from an illness, something he tries to “discuss” (or more accurately monologue) with Koharu but she abruptly cuts him off because she has more important things to do than listen to a long sad story she feels she already understands. He, meanwhile, never quite thinks to ask her very much about her life outside of him and is both hurt and slightly resentful when she casually mentions that she’s had her share of loss too which is why she’s so keen to start a family of her own.

Ryota may be the contemplative sort, but he’s also the type that likes to talk out loud about his feelings without feeling the need to hold anything back. Koharu meanwhile is precisely the opposite. She might be upfront about what she wants and direct in stating her desires, but she’s also resolutely uncurious, dislikes talking about “unpleasant” things, and is content to let the mystery linger where Ryota wants to know absolutely everything (but without actually asking any questions). Taking a (solo) holiday, he finds himself alone among a gaggle of middle-aged women taking a break from their husbands who explain to him that small secrecies are an entirely normal and in fact essential element of a healthy relationship. Without them, their lives would not be possible.

It was a quest for self knowledge, however, which took him to Thailand. Ironically, he went “alone” but as part of a tour group, whereas Koharu took the opportunity to go to Australia and hunt gemstones entirely by herself only to be confronted by a sense of loneliness in wanting to turn to someone with whom to share the moment but finding no one there. In sync to a point, they are still not quite ready to act as one, Koharu confessing that it’s undoubtedly easier to do things on your own, laying bare the shyness that unpins her deceptively outgoing personality in her fear of the awkwardness that comes with shared intimacy.

That intimacy is something Ryota craves but also fears. He’s afraid of getting attached, she’s afraid of getting bored. Ryota compares his fear of falling in love to the sense of emptiness one feels when a movie ends, or perhaps the act of enjoying a beautifully cooked steak but knowing that the meal will all too soon be over. Koharu points out that a never ending steak would be a hellish nightmare, implying that it’s better to just enjoy the steak until you’re full and then be thankful for a delicious meal. That’s something she too finds hard to accept, however, when she discovers that her dreams of a picture perfect family may be impossible to achieve. She pulls away, isolating herself, nobly trying to spare Ryota the pain of witnessing her suffering. An old lady (Hairi Katagiri) advises him to be foolish in love, make an uncharacteristically grand gesture. The future may not be quite the way you pictured it, but that’s no reason you can’t be happy with what you have while you have it. No one knows what may come. Savour the moment while the moment lasts, everything else is for another day.

Screened as part of the Japan Foundation Touring Film Programme 2020. 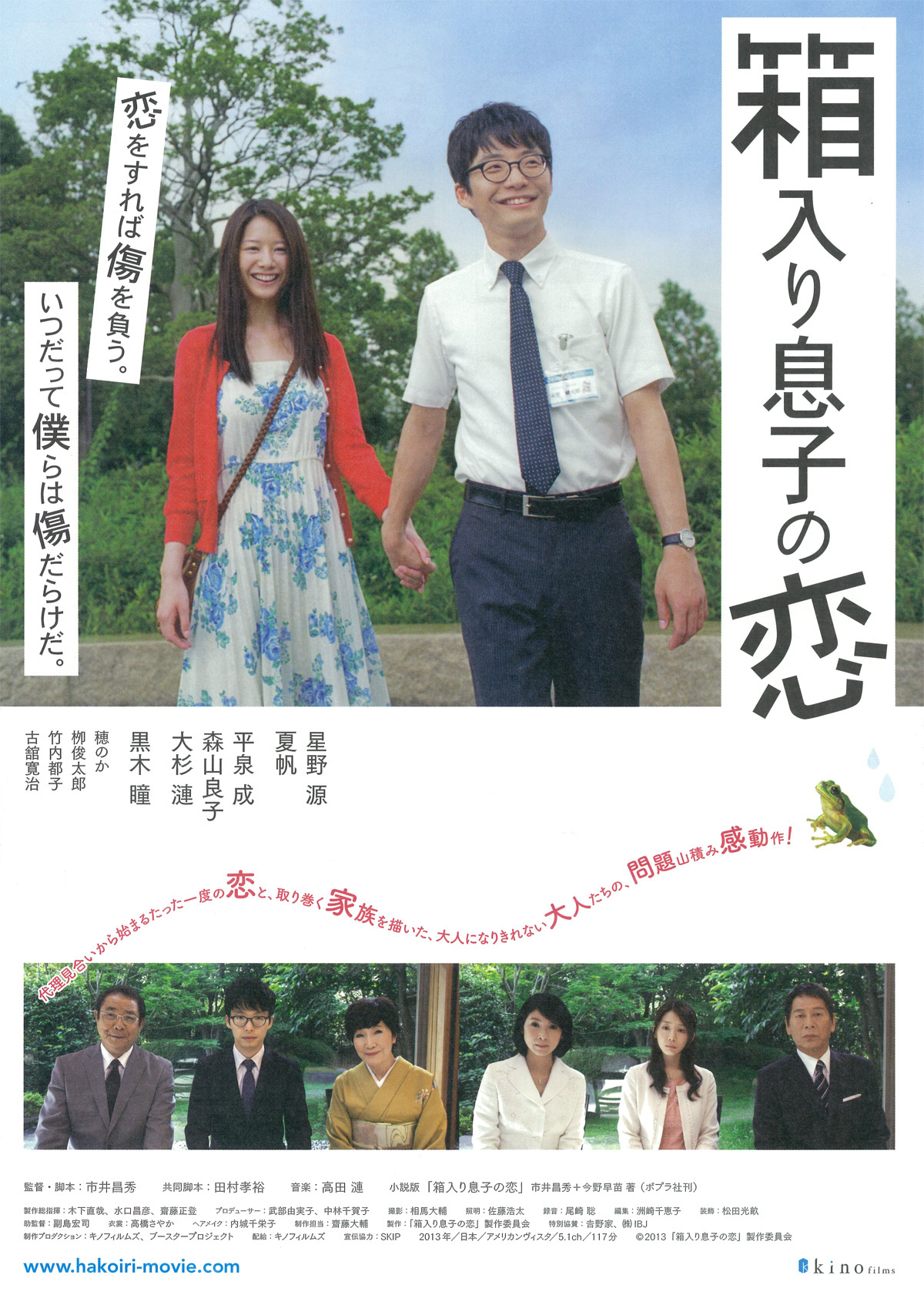 Post-war Japanese cinema was intent on investigating whether father really did know best while his children strived to find their place in a changing society. Contemporary Japanese cinema may feel as if the question has been more than well enough answered already but then again Japanese society remains conformist in the extreme and arranged marriage still an option for those who find it difficult to find a match on their own (remaining single, it seems, is still an option requiring intense justification). The protagonists of Blindly in Love (箱入り息子の恋, Hakoiri Musuko no Koi) find themselves in just this position as their well meaning (to a point) parents attempt to railroad them into the futures they feel are most appropriate while perhaps failing to deal with the various ways their own behaviour has adversely affected their children’s ability to function independently.

Kentaro (Gen Hoshino) is 35. He has a steady job as a civil servant and still lives at home with his parents which is hardly an unusual situation in contemporary Japan save for the fact he is not married and seems to have no interest in dating. Rather than eat with his colleagues, Kentaro comes home for lunch every day and returns straight after work, retreating into his bedroom to spend quality time with his pet frog and play video games. His parents, worrying that he may be lonely when they are gone, decide to find him a wife by effectively going speed dating on his behalf with a host of other parents in a similar position.

There they meet the Imais who are keen to marry off their 23-year-old daughter Naoko (Kaho). The elephant in the room is that everyone at this meeting is there because they believe there is something “wrong” with their children that makes them difficult prospects for marriage. Consequently, the Imais have decided not to disclose the fact that Naoko is blind until later in the negotiations.

The Imais’ ambivalent feelings towards their daughter’s disability speak to a persistent social prejudice which views those who have different needs as somehow less. Mr. Imai is a high flying company CEO who puts on a show of only wanting the best for his little girl, but he’s also a snob and a bully. He keeps trying to set Naoko up with “elites” like him, but those elites will also share his own prejudices in feeling that his daughter is “imperfect” and therefore not a prime match in the arranged marriage stakes. Kentaro, who unbeknownst to everyone except Mrs. Imai has already enjoyed a love at first sight meet cute with Naoko, is the only one brave enough to call Mr. Imai out on his hypocrisy when he accuses him of neglecting his daughter’s feelings in favour of asserting his own paternal authority. As you can imagine, Mr. Imai is not happy to have his faults read back to him.

Making the accusation at all is extremely hard for Kentaro who has just spent the last ten minutes getting a dressing down from Mr. Imai who has read out a list of his perceived imperfections from his unbreakable introversion to his lack of career success. Mr. Imai wants to know if a man like Kentaro who has basically been the office coffee boy for the last 13 years can keep his daughter in the manner to which she’s been accustomed. Kentaro has to admit that he probably can’t and that Imai has a point, but unlike Imai he is thinking of Naoko’s happiness. He sees her disability but only as a part of her personality and respects her right to a fully independent life which is something her father seems to want to deny her, not out of a paternalistic (or patronising) worry for her safety but simply as a means of control.

Conversely, Kentaro is attracted to Naoko precisely because he feels as if she might be able to see him in greater clarity in being unable to judge him solely on appearance. In a rare moment of opening up as part of his defence against Mr. Imai, Kentaro reveals the pain and suffering that have led him to withdraw from the world, admitting that after years of being taunted or ignored, branded an oddball and mocked for his rather robotic physicality he simply decided it was easier to be alone. It might be safe to say that Kentaro’s parents are being overly intrusive, that they are trying to impose their idea of a “normal” life on their son who may be perfectly happy playing video games alone for the rest of his days. Kentaro, however, is not quite happy and as is later pointed out to him had merely given up on the idea of any other kind of existence as an unattainable dream.

Giving up has been Kentaro’s problem and one that recurs throughout his awkward courtship. Like his pet frog, Kentaro has been perfectly contained within his own tank and somewhat fearful to crawl outside but is slowly finding the strength thanks to his bond with Naoko who struggles to overcome her conservative patriarchal upbringing and escape her father’s control. Yet it isn’t only the youngsters who have to learn to leave the nest but the parents who have to learn to let them go. Kentaro’s mum and dad have perhaps enabled his sense of disconnectedness by keeping him at home with them as a treasured only son, while the Imais’ problems run deeper and hint at a deeply dysfunctional household with a father who is controlling and eventually violent while Mrs. Imai tries to effect her daughter’s escape from the same patriarchal conservatism which has succeeded in trapping her. Blindly in Love refuses either of the conventional endings to its unconventional romance but edges towards something positive in affirming its protagonists’ continued determination to fight for their own happiness even if opposed at every turn.

Blindly in Love was screened as part of the 2019 Japan Foundation Touring Film Programme.